80 years after it was sunk, the wreck of WWII German cruiser "Karlsruhe", the warship that led the attack on Kristiansand during the invasion of Norway on April 9, 1940 has been discovered resting at 490 meters below sea level about 13 nautical miles from Kristiansand in Southern Norway. Karlsruhe was a light cruiser which participated in Operation Weserübung, the invasion of Norway in 1940.

Statnett, the Norwegian state-owned power grid operator, made the astounding discovery of the lost Karlsruhe cruiser around 488 meters (1,600 feet) below sea level off the Southern coast of Norway, some 13 nautical miles from the port of Kristiansand. Signs of wreckage were first detected three years ago during inspection work when sonar detected a shipwreck only 15 meters from an undersea power cable between Norway and Denmark.

Karlsruhe was a light cruiser, built by the Deutsche Werke shipyard in Kiel and launched in August 1927. She was in the process of being modernized at the outbreak of World War II and only became ready for action in April 1940, when she participated in Operation Weserübung, the invasion of Norway. She was not ready for combat operations, so she was used as a troop transport for the attack on Kristiansand.

Sunk during the invasion

As Karlsruhe entered the fjord outside the harbour of Kristiansand, she came under heavy fire from the Norwegian coastal guns at Odderøya Fortress. The cruiser turned in the fjord to bring her full broadside into action; the artillery duel lasted for about two hours before heavy fog again covered the port, forcing both sides to cease fire. The Norwegians surrendered an hour later, and the German ships landed troops at Kristiansand. While returning to Germany, she was attacked by the British submarine HMS Truant which was positioned outside the fjord; two torpedoes hit the ship and caused significant damage. Unable to return to port, Karlsruhe was subsequently scuttled by one of the escorting torpedo boats.

It was during inspection work three years ago that sonars discovered a shipwreck close to Statnett's power interconnectors between Denmark and Norway. Statnett is the system operator in the Norwegian energy system and an enterprise owned by the Norwegian state. This summer, Statnett's Senior Project Engineer Ole Petter Hobberstad got the chance to find out more about the sunken ship that had been observed 13 nautical miles from Kristiansand in Southern Norway. From the offshore vessel "Olympic Taurus", the mysterious wreck was investigated by ROV (Remotely Operated Vehicle) and multibeam echo sounders.

— When the ROV results showed us a ship that was torpedoed, we realized it was from the war. As the cannons became visible on the screen, we understood it was a huge warship. We were very excited and surprised that the wreck was so big, Hobberstad says.

To find such a special war wreck is rare and extra fun for us who work with underwater investigations.

You can find Karlsruhe's fate in history books, but no one has known exactly where the ship sunk. Moreover, it was the only large German warship that was lost during the attack on Norway with an unknown position. After all these years, we finally know where the graveyard to this important warship is, says Frode Kvalø, archaeologist and researcher at the Norwegian Maritime Museum in a statement about the discovery posted online by Statnett. 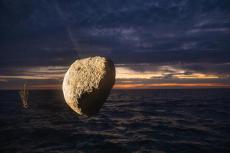 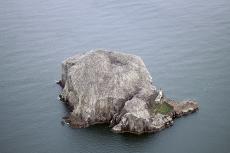 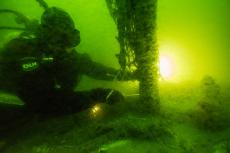 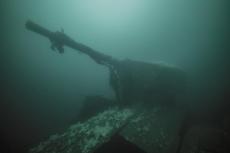