We were in Addu, the second largest “city” in the Maldives and capital of the southernmost atoll. Located 45 miles below the equator, and 540km south of Malé, this is the most remote of the 26 atolls that, scattered along almost 900km of the Indian Ocean, make up the archipelago of the Maldives. This piece of land, with a very unique history, was the starting point for our ship, the Maldives Blue Force One, on the route through the best Maldivian reefs in the Southern Hemisphere. Snorkelers can swim with whale sharks at Gaafu

We started our trip by exploring the finest dive spots in this atoll. One of the most accessible was the wreck of the British Loyalty. This British navy ship was torpedoed in March 1944 by the German submarine U-183. The ship, dedicated to fuel transport, suffered extensive damage but did not sink. It was partially repaired and destined to function as a floating “warehouse.”

Finally, in 1946, it was sunk at its current location, just off Hithadhoo Island, and has become a very popular dive. The history of this shipwreck is not a coincidence since this atoll was a secret British air base in World War II, which is why it has some important infrastructure despite its remote location.

Diving the wreck was generally easy, as there was usually no current and its state of conservation was very good. The ship lay on the sandy bottom on its starboard side and was heavily colonized with hard corals. Large black coral trees could be found at the stern, below the propeller. It was also in this area where we found the highest concentration of fish. This wreck was an entertaining dive, an ideal way to start off our dive cruise.

Another essential dive in Addu was Mudakan, one of the best-known manta cleaning stations in the area. We could sometimes encounter strong current here, so it was important to descend quickly to avoid passing over the coral head where the manta rays congregated.

Once we reached a depth of 15m, we let ourselves drift, always staying together as a group, letting the current push us swiftly along the reef. Visibility was good, and after a brief drift, we spotted a group of eight to ten mantas on our horizon, swimming over a small coral bommie rising between the reef and the sand.

Following the instructions of the pre-dive briefing, we positioned ourselves around the cleaning station, using reef hooks to avoid damaging the coral and always staying a reasonable distance away so as not to interfere with the behavior of the mantas. One by one, everyone in our group found their place.

For the manta rays, this ritual was a daily task, but for us, it was an amazing spectacle. In a kind of perfectly orchestrated choreography, each manta ray passed through a specific point of the station, stopped, unfolded its head lobes and opened up its mouth completely. At that moment, dozens of tiny wrasses pounced on the manta in a stubborn cleaning task. With their tiny mouths, they tore off dead tissue, cleaned wounds and plucked small parasites from the manta’s skin. From time to time, one of them would overdo it and bite too much off. Then the manta, in a kind of “groan,” would expel them abruptly, as if it had sneezed. Meanwhile, the rest of the mantas waited patiently for their turn, lining up and holding their positions against the current.

We were 22m deep, and after almost 30 minutes, the alarms of our computers began to warn us that it was time to ascend if we wanted to avoid exceeding our no-decompression limit. As we left the protection of the reef, the current expelled us from this privileged vantage point. The image of the mantas on the cleaning station faded in seconds.

After a brief safety stop, we returned to the surface. Gathered around the surface marker buoy (SMB) of our dive guide, our faces reflected the satisfaction of the experience we had just shared. In a few seconds, the dhoni came to pick us up and take us back to the ship where breakfast awaited—a great way to start the day. The dive in Mudakan was so good that no one minded repeating it before leaving Addu to head north.

The rules of the Great South

Addu Atoll is so far south that the effects of the monsoon are much less influential here than in the Northern Hemisphere atolls, where everything is ruled by the two main seasons. The presence of large pelagic species such as tuna, whale sharks and the emblematic mantas is closely linked to the winds and currents of the monsoon.

In the Southern Hemisphere atolls, this is slightly different. Recent studies reveal that at the few “manta points” that are known in the southern atolls, the mantas, although to a lesser extent, stay put—that is, they do not make large migrations like their relatives in the north, preferring to congregate in the eastern or western atolls “cleaning stations,” depending on the time of the monsoon.

In these southern atolls, any encounter is possible, and the dive sites are not crowded, but the best season does not usually last more than two months, from February to March. It is in these two months that the most favorable conditions occur; the predominant current is from the east, bringing clearer water to the channels.

Fuvahmulah: A different and unique island

North of Addu was the small town of Hulhumeedhoo, from where we set sail for Fuvahmulah. This island was perhaps the most unique of all in the Maldives. It was an island that did not have the characteristic morphology of the atolls but looked like a rocky island. Instead of the typical lagoon, this island had two small freshwater lakes. In addition, some of the few remaining Buddhist vestiges of the entire archipelago were found here—remains that Islamization was responsible for reconverting.

To the south of the island, a coral platform stretched for several kilometers, making it one of the best places in the Great South to have exceptional encounters. There, one could see large groups of gray reef sharks, silvertip sharks, thresher sharks, schools of hammerhead sharks and occasionally some giant sunfish. In this area, the reef was just splendid, with some very exuberant acropores.

In the past few years, a dive center on the island has been organizing feeding dives and some tiger sharks have appeared. In the pre-dive briefing, our dive guides explained that we would not take part in these feeding activities as it modified the behavior of the animals and could lead to safety concerns.

After a detailed explanation of the dive, we immersed ourselves in the vicinity of ​​the tiger sharks, and we spotted two large specimens, which approached us calmly, without the lure of bait. Measuring more than three meters in length, they were spectacular sharks and very rare to see in other areas of the Maldives.

Walls of sharks and sleepless nights

With our minds loaded up with good memories, we continued our journey north. Halfway to the next atoll, we crossed the imaginary line of the equator. A few hours later, we arrived at Vaadhoo—a small island south of Huvadhu. Huvadhu is considered (with some controversy) to be the largest atoll in the Maldives, better known as Gaafu Alifu and Gaafu Huvadhu—the two districts into which it is divided.

We spent several days at Gaafu and had some of the best dives of the trip here. The dives were done on very steep drop-offs, very similar to one another, where the main attraction was the great schools of gray reef sharks. Often, if the current was strong, we found veritable walls of sharks, which remained immobile, a few meters from us, besting the current without apparent effort. In addition to the gray reef sharks, large schools of jack fish, small whitetip sharks and dog­tooth tuna completed the scene.

In this atoll, at night, we enjoyed one of the most incredible moments of the cruise. Dive boat crews have learned from local fishermen that placing large spotlights on the stern of their boats attracts large amounts of plankton, which in turn is a lure for large plankton feeders such as whale sharks, mantas and mobula rays.

As soon as it got dark, especially if there was no moon, one just had to wait a few minutes for large clouds of tiny crustaceans and fish larvae to accumulate under the powerful lights. Sometimes, the action would kick off well into the early hours of the morning, when several whale sharks would hang upright under the lights, with their massive jaws wide open, to gobble up as much food as possible.

This was the time to enter the water equipped with a mask, snorkel and fins to swim with the largest fish in the ocean. It was truly a unique experience that was well worth losing a few hours of sleep.

For decades, the Maldivian atolls of the Southern Hemisphere have been largely ignored by tourism, and particularly by divers. Now, they are offered to us as an alternative full of surprises, with dive sites far away from the crowds of other places, dives that exude adventure and generate great emotions. Without a doubt, this is another way to experience the Maldives.

Maldives Blue Force One was the ship on which we made the cruise. Measuring 42m in length, it has 11 spacious and luxurious cabins and suites, as well as two outdoor jacuzzis. It has won awards in 2014 and 2018 for being the best-built boat in the entire archipelago. This liveaboard, in addition to its extraordinary team of guides, offers greater space, excellent comfort and great service for a price very similar to that of more basic boats.

A valid passport with a minimum validity of six months is required. To ensure the safety of all, the Maldives Health Protection Agency (HPA) has made it a mandatory requirement for all tourists arriving in the Maldives to have a health document in English, confirming that he or she has had a PCR test for Covid-19 with a negative result, which was carried out within a maximum of 96 hours prior to departure to the Maldives.

The official currency in the country is the Maldivian Rufiyaa, but payments on board are made with US Dollars and Euros. Payment by credit card is also possible.

How to get here

There are several companies that have flights to the Maldives: Qatar, Emirates, Etihad, Turkish, etc. At the same airport in Malé, one must take a domestic flight to Gan or Kooddoo, depending on where the cruise begins.

What to see and do

During the cruise, the liveaboard will visit a few islands so guests can learn about the local culture. There is also a barbecue on a desert island towards the end of the cruise, featuring various dishes of the local cuisine. ■ 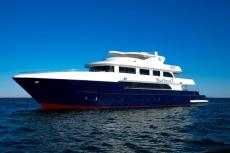 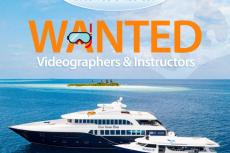 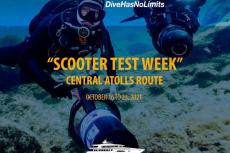 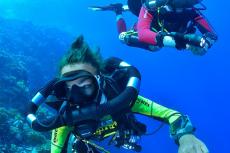 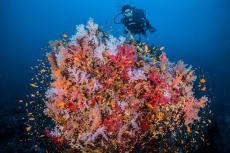 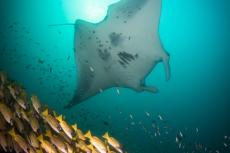 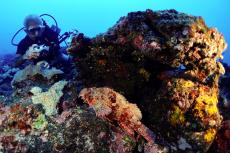 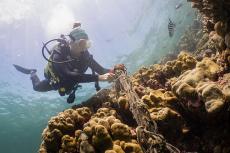 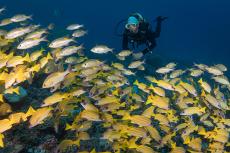