Land of Fjords & Seas of Plenty. This feature takes your around the country, from the North Cape, via the Lofoten islands, on a wreck safari out of Trondheim and finally to the southern port city of Kristiansand. Diving from the cool arctic to the temperate seas in the south. Norway has more than a few surprises beneath the surface, as well as on land. Nothing beats local knowlegde. So, what options did we have other than to contact the Italian, Carlo Golfetto, who runs the dive operation, One Ocean, in Korsvik Marina a little outside the town of Kristiansand.

The dive center is perfectly located for diving the region’s most famous wreck the giant MV Seattle, which rests on a slope only 400m from the dive center. Other great wrecks are located very close by as well, within 10 minutes boat ride, at decent depths between 15 to 30m. And the Italian presence here, however unlikely, just ads to the equation.

Carlos’ hearty laughter and his good command of English, with the unmistaken Italian accent, guarantees a couple of very entertaining days. The spirits aboard his dive boats were always high, and that is the way a dive vacation should be.

We began with the biggest wreck and deepest dive—one of the best wreck dives I ever had in Norway. MV Seattle is not only in relative good shape, but it is also huge—a whopping 140m. The only downside is that a big part of it lies quite deep. We did one dive on the shallowest part starting at the stern, from 23m on downwards.

This was already very cool, but the remainder of the wreck beckoned me to venture further down along the sloping deck and quite significant depths. There were two bouys on the wreck. One is tied to the stern. From a depth of about 15m, it was possible to get a decent overview of this impressive wreck even before we could grab onto the rail.

Reaching a maximum depth of 33m, we had ourselves a decent tour of the rear area of this massive wreck. Even though the steel plates have buckled where the ship broke its back settling on the seabed in 1945, it is still in a fairly good condition. Big openings make it possible to penetrate parts of the wreck without having to embark on advanced penetration projects.

Even divers who don’t call themselves die-hard wreck divers, yours truly included, think this dive is magical. The sheer size surely plays its part. Since the wreck sits straight up, it is not an issue navigating this one and find one’s way back to the downline.

As we break the dead calm surface and poke our faces back up into the sunshine, we are greeted by a wonderful smell of food. Straight back to the dive boat it is, and getting out of the dive equipment can’t happen soon enough as Carlos has one of his lovely pasta dishes ready and waiting— steamy hot and yummy.

A 40-minute dive laden with excitement and experiences surely works up a solid appetite, and followed by Carlos’ pasta with tomato sauce and parmesan, diving and dining make for a highly recommended and memorable combination. I can think of worse ways of passing time while getting rid of some nitrogen. The boat is already slowly heading for the next dive site. Hot coffee and tea is also served while we get under way and our tanks exchanged for full ones.

The next dive site will be another wreck, the Tom B. Since the sea is dead calm and this wreck lies in a exposed location by the open sea, it is a window of opportunity not to be missed. Two out of three parts of the wreck are almost flat but the visibility is really good, and there is plenty of marine life in and around the wreck. Different species of the colourful wrasses dart in and out.

On the white sandy bottom, several flatfish try out their camouflage and cover themselves with sand when we shine our torches at them. In a shadowy cranny on the wreck a lumpsucker is guarding his nest of eggs. He doesn’t fancy disturbances, but his curiosity seems to get the better of him, and he ventures out to eyeball these bubbling intruders. He ends up posing willingly for the photographers. A little school of pollacks sails by but take off quickly once they establish that we are not all that exciting after all.

Our computers now urge us to move towards shallower water, so we venture up into the kelp belt. Here and there we see nudibranchs and crabs but, quite disappointingly, not a single lobster regardless of the fact that the terrain offers lots of suitable crevices and hideouts. Ooops... now the the computer has begun beeping. Even with a maximum depth at this site of not more than 23m, we have now become saturated with nitrogen and are obliged to end our dive despite having both appetite and air for more.

Some of the best dive sites in the region are found just outside Kristiansand and on the outside of Topdalsfjorden. We did an impressive nature dive on the southeastern side of Grønningen Lighthouse. This dive site wasn’t exactly pristine nature. We knew from the onset that we would see a lot of wreck diving on a trip to Kristiansand, but the fact that we couldn’t escape finding some rusty steel on all of our dives is not exaggerated.

On the other hand, the prolific fish life seemed to treasure all the remains of the shipwrecks that lie strewn over vast areas on this region. We call this site a nature dive now. because the remaining debris cannot be called shipwrecks anymore and are in the process of becoming integrated into the natural habitat.

The varied topography in combination with all the hideouts created by the rusted twisted metal acts like a magnet for the local wildlife. They might be of the free swimming sort, or crawl along the bottom. The bottom is quite varied and a lot of the cliff walls carry unmistaken marks from the ice age. The glacier ice scoured out fine arching furrows in the bedrock. It almost looks like it has been done by machinery.

Surprisingly, one of the most positive wreck dive experiences we did was close to town. Initially, a quick glance at the map had done little to convince us that it would be a good wreck dive. We envisioned bad visibility and plains of bare mud, but Carlos insisted. ”The city wrecks” as he called them, are actually a splendid place for beginners’ wreck dive training and penetration techniques. A maximum depth of 17m in combination with small and sizeable wrecks, four to be exact, makes for a splendid training ground and a good site for a dive outing. The wrecks, which have not been identified, lie in the harbour at Lund in Kristiansand.

And if you haven’t got enough of wrecks just yet, it is possible to continue diving on several more just by swimming off the jetty outside the dive center. Just jump in and swim across the little sound. This can even be done under water since the depth is not more than 8-10m. Here, you will find the wreck of an old fishing boat at a depth of about 10m.

But there are so many others. You can also find the remains of a German war plane, a Dornier, and the minesweeper M-426. In between the dives, Carlos has several good sites where divers can go ashore and relax between dives. During summer time, it is tempting to just have a siesta and tan in this archipelagian idyl. In the cooler months, a campfire and hot drinks is another way to have a cozy break.

Kristiansand is Norway’s fifth largest city with around 75,000 inhabitants. The city was founded in 1641 by the Danish-Norwegian king Christian IV. During the summer, the city clearly comes to life. ”Sun, summer and sørlandet” (which means ’Sun, summer and the county’) is a popular figure of speech around these parts, and for many Norwegians, Kristiansand is the town for summer. Kristiansand can get about 2000 hours of sunshine a year. The boating season is another popular aspect of living here that most of the Kristiansanders look forward to during cold and murky winters.

The city can boast about having the largest marina in the country. Close by, one can also find the new fishing pier which is really worth a visit. If you want to combine a family vacation with diving, this is a very good place to go. The animal and amusement park is the town’s number one tourist magnet. Everyone knows ”Kardemommeby” (Cinnamon town), right? Not to mention, the city also offers a wide range of cultural activies including many museums.

One Ocean is located in Korsvik Marina, 8km east of Kristiansand. The dive center has a modern 35-foot dive boat moored only 20m from the dive center. One Ocean is open year round and offers boat trips seven days a week. In the summer there is up to three daily sorties and dependent on the arrangement and destination you can have one or two dives a trip. The boat has been purpose built for diving in 1998 and is equipped with a 215 hp diesel. On the stern a big diving platform is mounted with a ladder.

On the dive deck there are showers with hot and cold water so the diving equipment can also be rinsed after diving. With a top speed of 23 knots most dive sites in the archipelago is reached in less than 30 minutes. Tanks can be refilled from a station 24 hours a day. You pay with tokens bought in the dive shop during opening hours. Courses offered is PADI Open Water and upwards in the PADI hiearchy.

One Ocean has two types of accomodation on offer: Two condomimiums view seaview located directly above the dive shop. These apartments come will all modern amenities, for up to eight divers in each. The other option is the nearby Dvergnestangen Camping, only 500m from the dive center, which also offer condos and, obviously, camping. For more information, contact One Ocean located at Strandåsen 22, 4638 Kristiansand, Norway. E-MAIL: oneocean@oneocean.no, website: www.oneocean.no. Tourist information for Kristiansand can be obtained from www.sorlandet.com. ■ 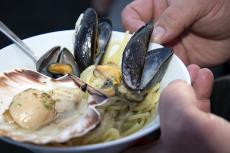 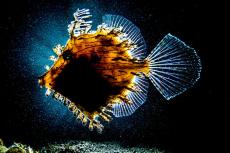 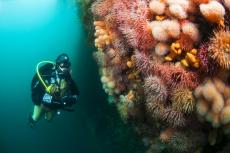