The Wit Artificial Reef in Belize

Belize is a country blessed with an abundance of fabulous coral reefs, to which its newest underwater attraction—the sunken ship "The Wit"—adds another dimension. Angelique Brathwaite has the story. A scuba diver explores the nooks and crannies of the Wit.

The new artificial reef site is located at Turneffe, the island’s largest and most biodiverse coral atoll, some 32km east of Belize. Turneffe also encompasses a network of productive mangrove forests and seagrass beds within its flats, creeks and lagoons.

The Witconcrete, affectionately called “The Wit,” was a 5,400-ton ship, sunk within the Turneffe Atoll Marine Reserve (TAMR) in 75ft of water. The operation was carried out by Turneffe Atoll Sustainability Association (TASA), the co-managers of the protected area, in association with Belize Sugar Industries Limited (BSI), Blue Finance and Blackbird Caye Resort, with support from the Ministry of Blue Economy and Civil Aviation, and the Ministry of Tourism and Diaspora Relations—Belize.

The Wit was born as YO-162 in 1943 and served the US Navy for around 20 years. It was used as a floating transfer station in the Second World War, transporting supplies around the Gold Coast and the Eastern Seaboard of the United States. After being struck from the naval lists in 1967, it was transferred to the Philippines and renamed Witconcrete. The ship was acquired by BSI and, after it outlived its usefulness as a sugar barge and storage depot for molasses, was gifted to TASA in 2021.

It was exactly the right time for TASA, who immediately saw its potential for wreck diving and as an artificial reef. Concrete is one of the most suitable materials for corals to recruit to, so it could easily form the base structure of a new coral reef. In addition, its many holds, cabins and surface structures would provide a new home for fish and benthic organisms—creating an artificial reef. It was a “no-brainer.”

TASA, working with Blue Finance, secured financing from the Sustain­able Ocean Fund (SOF) for the preparation, cleaning and sinking operations. The Wit fit nicely into the portfolio of projects developing sustainable revenue for the management of the TAMR.

The Wit was extensively cleaned and prepped by local and international marine experts, and met both national and US Environmental Protection Agency (EPA) standards for hazardous materials prior to sinking. It was also made more diver-friendly, by being widened and, in some cases, having access points specially created for ease of entry and exit.

The Wit did not go down easily, which was exactly the opposite of what would be expected from a concrete vessel—but sink it finally did on 10 December 2021. This was after a tremendous effort by 15 scuba divers, two freedivers, two tug boats, five surface vessels, eight huge, bespoke anchors, explosives and cooperation from the elements. It finally chose its resting place in close proximity to the planned location, and that is where it now lies (between 30 and 80ft of depth). The Wit was not a dainty vessel; it was a large, squat structure, some 375ft in length, 56ft wide and 38ft deep. Made of concrete and never designed to be self-propelled, it was also not designed to be sleek, but instead to carry maximum loads.

Watch the dramatic video of the sinking of The Wit by Beth Watson:

The Wit came with its own ecosystem, as the hull had been submerged for years prior to the sinking. Scores of fish immediately made it their home—from the resident, reclusive rainbow and blue parrotfish, hogfish and angelfish to the curious barracudas. All this, after only a few months of being submerged. It has a large exposed surface area, shallow enough in some places for snorkellers and suitable for divers of all levels to explore. Certified wreck divers can penetrate the inner holds for even more adventure. Lying on its side in a sandy expanse, The Wit is more than big enough to satisfy three or four dives.

Through the park entrance fee system, monies collected from diving The Wit will assist in funding TASA’s operations and other programmes in the TAMR. We are also working on an impactful experience where divers can directly participate in monitoring The Wit as it grows into a reef; as well as protection of the area and other new, exciting opportunities.

Come dive The Wit and help us conserve Belize’s largest atoll at the same time! 

Thanks go to Nicolas Pascal and Taylor Bratton for proofreading.

Angelique (Angie) Brathwaite is a Barbadian marine ecologist—now based in France—with a focus on coral reef ecology, marine management and sustainable finance for marine conservation. Also a PADI Instructor with over 20 years’ professional experience, she has worked at the policy and science levels, coupled with community and stakeholder engagement in both populated and remote areas. A former head of marine research for the government of Barbados, Angie is the co-founder of Blue Finance (blue-finance.org) and the director of science and management for this NGO. 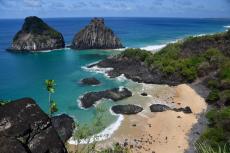 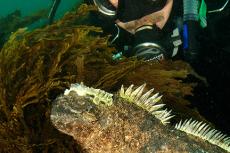 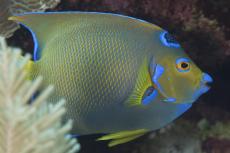 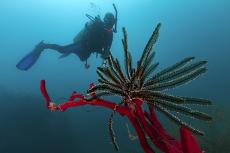