The Galápagos archipelago, a chain of islands in the Pacific Ocean about 600 miles off the coast of Ecuador, is like no other place on earth. More than a hundred islets, rocks and 13 main islands make up the Galápagos. It is home to strange creatures found nowhere else. This is one of the few places in the world where you can scuba dive and snorkel with animals which remind one of the dinosaurs of ages past. Steve Rosenberg is a widely-published, award-winning American underwater photographer and photo journalist based in California who has authored over 20 destination guidebooks for international publishers including Lonely Planet, Cruising Guides and Aqua Quest Publications.

He won more than 250 awards for his imagery in international competitions, including gold medals in the prestigious Hans Hass Photo Competition in Austria and the First World Underwater Photography Competition held in the Turks and Caicos Islands in 1997.

He holds the coveted SSI Platinum Pro 5000 certification, awarded to divers with 5,000 or more dives, and is founder of Dive Galápagos, which provides a complete guide to dive sites in the Galápagos Islands, as well as Rosenberg Ebooks, which produces interactive e-books for dive and travel guides.

The marine iguana (Amblyrhynchus cristatus), found only in the Galápagos Islands, is a marine reptile that closely resembles the movie adaptation of Godzilla. It has the unique ability among modern lizards to forage for food in the sea. These iguanas have spread to all the islands in the archipelago, living mainly on the rocky shorelines around all of the islands.

The ancestors of marine iguanas were probably a species of land lizards. The marine iguanas range in size from eight to 14 inches. They are not very agile on land, but are incredibly graceful swimmers. The subspecies of the marine iguanas in the archipelago are identifiable by their sizes as well as distinct colorations. For example, the Espanola subspecies is redder while the Santiago iguanas are greener. The iguanas found on Fernandina and Isabela islands are the largest iguanas that can be found in the Galápagos.

One of the best dive sites to interact with and photograph marine iguanas underwater is Cabo Douglas, located at the northeastern corner of Fernandina Island on the western side of Isabela. The Humboldt current is the predominant current in this area, bringing in nutrient-rich, but very cold water from the west. Temperatures frequently dip to a chilly 13°C (56°F). The Iguanas at this location often let divers approach very close, seemingly unconcerned by their presence, because they are concentrating on finding rocks covered with tasty algae.

Like all iguanas, they take on the temperature of their surroundings. In the chill of the early morning hours of the day, they can hardly move until the heat of the sun speeds up their metabolism. Galápagos marine iguanas are active during the day. In order to raise their body temperatures as much as possible, they will spend the first few hours after sunrise preparing for their dip in the ocean. The mostly darker colors of the iguanas allow them to rapidly absorb heat. In the morning hours; they can be seen sunning themselves on the shoreline or piled together to share heat.

The vast majority of individuals in each colony will wait until low tide and then feed almost exclusively on marine algae on exposed rocks in the intertidal zones. The largest males, making up only five percent of the population, have a bolder feeding strategy and will actually dive deeper into the water for food, and mostly during the hot midday hours. They will usually enter the water just before noon after they have had the opportunity to raise their body heat and will stay in the water to feed for up to two hours.

The best time to dive with marine iguanas is from 11:00 am to 1:00 pm when most animals can be found in the shallows. You can often expect to encounter many iguanas in the protected cove just to the east of the point at Cabo Douglas, on Fernandina Island, on the western side of Isabela. The waters in this area are extremely cold, fed mostly by the Cromwell Current, which brings nutrient-rich water from the deep ocean to the west. These chilly currents cause the iguanas to lose heat rapidly when feeding. This forces them to return to the rocks and warm up in the sun again after feeding.

The physical structure of these animals assists foraging. According to Shepard and Hawkes, the marine iguanas have “long claws, tough skin, blunt heads, flattened tails, and well-developed salt glands.” ¹ They have a laterally flattened tail and spiky dorsal fins, which aid in propulsion in the water and make them strong swimmers. The flat snout and sharp teeth enable them to graze on algae growing on rocks.

An iguana’s size and the way it retains or loses heat determines its method of feeding. Small individuals, which lose heat quickly, forage on rocks at low tide, scraping algae off the surface of the rocks, and they rarely dive into the sea. Larger individuals, however, do not lose as much heat and so they can be active for a longer period. They most often graze on algae in the shallow water at depths of two to five meters, but can dive up to 25m down to rocks where there is an abundance of green and red algae, and little if any competition from other iguanas.

Activity slows between noon and late evening. Around two pm, it appears as if someone has rung a signal bell, starting a stampede of iguanas back to the shoreline. Before sunset, the iguanas retreat into crevices or beneath boulders to spend the night.

Divers who are interested in close encounters with these fascinating animals should select dive yachts that include Cabo Douglas on their itineraries. Plan your dives so that you are in the water before noon. It is not unusual to encounter 10 or more iguanas on a single dive.

Be patient and approach the iguanas slowly to get a closer look. When these animals are feeding, they do not seem too concerned by the presence of divers. As they cling tenaciously to the rocks, they can frequently be seen turning their heads to one side or the other, allowing them to harvest the algae with their rows of teeth on the side of their mouths. Their long, sharp claws keep them anchored to the bottom, allowing them to hold tightly onto rocks, helping them stay in one place and feed even in rough seas.

They can hold their breath up to 15 minutes and remain in the cold water for long periods of time. Once back on land, they can often be observed sneezing and expelling liquid from their nostrils. Marine iguanas take in toxic amounts of salt while feeding underwater. A nasal gland filters excess salt ingested while eating. This is expelled through the nostrils by snorting, often leaving white patches of salt on their face. They have adapted so well to the ocean that they have become the only sea-going lizards on the planet. ■ 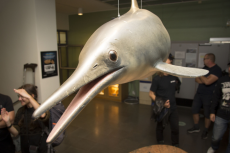 Creating a life-size model of an ichthyosaur
Ecology & Science
END_OF_DOCUMENT_TOKEN_TO_BE_REPLACED