The sinking of USS LST 349, which was heading to Naples from Anzio, Italy, occurred in February 1944. It happened during a severe storm, in which turbulent seas pushed the ship against the cliffs at Punta Papa on Ponza Island. Even though the people of Ponza made a great effort in the rescue operations, the death toll was heavy. The LST (also known as “landing ship, tank” or “tank landing ship”) was integral to the fighting forces during World War II, transporting tanks, cargo and troops directly to the battlefield. They were unique in that their flat keels allowed the ships to remain upright after beaching, without the need for docks or piers. Their twin propellers and rudders were specially protected from grounding.

Carlo Ravenna is an Italian underwater photographer based in Rome, who has been diving for over 25 years.

A love of nature and imagery led Ravenna, a former architect, into a career in nature photography and shooting for television.

The tank landing ship (also called LST or Landing Ship, Tank) used by the United States during WWII, had a flat bottom, a length of about 97m and a width of around 15m. The LST 349 was launched in Virginia on 7 February 1943 and was built, based on a revision of a British model, for logistical support of military operations in the Second World War for embarking and disembarking troops, military vehicles and supplies on coastal landings without harbor docks or piers.

On its last voyage, the fury of the sea tore the ship into two parts, which sank to the sandy sea floor in an upright position. Today, the bow of the ship rests at 26m, below Punta Papa, facing the northwest. The stern is located inside the cove, about 400m from the bow, and rests in a north-south orientation.

To explore the ship in detail, it takes at least two dives: one on the bow and one on the stern. The front section, most frequented by divers, is certainly the best part of the wreck. One just has to descend a few meters to get an overview of the wreck and see, in crystal clear water, the two machine guns and the cannons of the ship. The winch chain and other structures on the wreck are still in a good state of preservation.

However, the tailgate is no longer in place, which, when lowered, allowed the landing of soldiers and vehicles on the beach, so it is recommended that divers descend to the bottom to explore the garage first, finding entrances to different cargo holds along the way, meter after meter.

The walls of LST 349 are completely covered with a thick colony of yellow gorgonians, which benefit from the nutrient-rich current that is often channeled inside the wreck. Among the various fishes at the wreck site, you can easily find curious groupers that will follow the movements of divers.

To get beautiful photographs of the wreck, it is recommended that underwater photographers reverse their visit and start from the bridge. Otherwise, bubbles expelled by other divers in the group will pass through the many cracks of the hull on their way to the surface, spoiling most of the shots.

On the return ascent, given the proximity of the dive boat to Punta Papa, it might be better to keep the cliff on one’s left-hand side until 12m, where you will reach a beautiful cavern with various openings through which light is filtered. The stern rests at 20m, on a white, sandy sea floor, which makes the underwater environment very bright. Here, one will find a control cabin, machine rooms, a piece of a propeller blade, wheel and engines. Finally, divers ascend along the cliff wall, at the end of this multi-level dive.  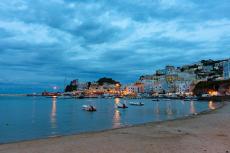 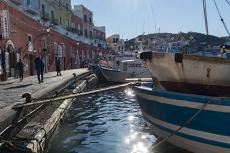 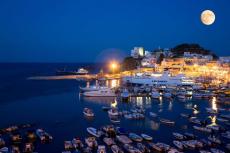 Ponza Island — The Isle of Circe the Sorceress

Denmark's Wrecks: A Selection from WWII back to the Age of Sail
Wrecks & Archaeology
END_OF_DOCUMENT_TOKEN_TO_BE_REPLACED