A Voyage to Antarctica

At 2:00 am, it is already daylight on Pléneau Island, a place where floating icebergs become grounded, a graveyard of diverse towering structures of ice articulated in extraordinary forms. In a quintessential snowy landscape, snowflakes of perfect shape fall over me, a moment of utter isolation. I am the only one awake among the few that have chosen to sleep on ice with a sleeping bag, our way of bonding with the final wilderness—Antarctica, the last of our planet’s pristine milieu. Though both the Antarctic and Arctic are high latitude, freezing polar regions, the similarities end there. The enormous Antarctic is an un-colonized continent covered with ice, whereby the north Arctic is comprised of a frozen ocean at the North Pole, surrounded by land masses to the south of which some are heavily populated by humans.

Once the domain of explorers who had fallen under its mystical enchantment and of appalling whalers and sealers who came to exploit the rich bounty of its frigid waters, Antarctica continues to weave its magic, profoundly alluring the modern day adventurer to its freezing shores. My journey began with a three-day flight and transits to Ushuaia, the southernmost city of the world, about 3,300km south of Buenos Aires.

Indeed, this picturesque town endowed with a unique landscape of high snow-capped mountains, sea, glaciers and forests is a fitting gateway for nature tourists on their way to Antarctica. From here, it is purported to be a dreadful 50 hours crossing the Drake Passage, which has earned a place in history as having some of the roughest sea weather in the world.

Drake Passage is dominated by fast flowing southern ocean waters squeezed between the land masses of South America and Antarctica. Storms frequently whip the ocean into a gloomy gray tumultuous, heaving mass of water, notorious for sinking many ships. My crossing with the Polar Pioneer was to be a lucky one; riding with the southwest wind of 24 knots, the vessel averaging 12 knots, crossing the Antarctic Convergence to see the first icebergs on the second morning. We were in Antarctic water.

Late afternoon, the third day of the voyage, we made landfall and landed on Aitcho Island, named for the British Admiralty’s Hydrographic Office, which I read was covered with extensive beds of moss and lichens. There was hardly any in sight. Instead, there was a Middle Kingdom-like landscape with an expanse of ice inhabited by thousands of Gentoo and Chinstrap penguins.

Much like the animals on Galapagos, these flightless birds have no fear of human intrusion; they happily go about squawking away and doing little penguin chores, from inflating their chest and pointing beaks towards the sky, letting loose a huge lunch-whistle call to mates, to rearranging pebbly rocks for a brand new nest. Whilst we respectfully stayed at a distance, at most times, it’s the birds that approached us so close that we could smell their fishy breath.

I walked right to the far side of the island, up the saddle between two hills to take in the panoramic view of Whalebone Beach in the midst of a spectacular vista tainted with little gray blobs of elephant seals, sea lions and penguins. A few of them, seemingly emerging from a snow storm, were staggering up hill towards me.

Though there is lots of snow and ice around, Antarctica is really a desert environment with less than 4mm of precipitation monthly making it the driest continent on earth. The amount of moisture received by the polar continent is comparable to that falling on the world’s hottest deserts. Antarctica is also the coldest continent on Earth. The lowest temperature ever recorded was minus 89.2°C at Vostok, at the Australian Antarctic Territory, in 1983. More than 98 percent of Antarctica land mass is covered with an enormous ice cap with an averaging thickness of 2.2km deep.

The continent itself, which is the size of the United States and Europe combined, is comprised of 5.4 million sq miles, but in the Austral winter of June to October, the environ of surrounding heavy pack ice increases in area to more than seven million square miles. If these were to melt with the current trend of increasing global temperature, seven million cubic square miles of water would be released, resulting in the ocean rising between 45 to 60m! This catastrophic event would not only flood numerous coastal cities, but the entire world’s weather would be thrown into irreversible mayhem.

My personal objective for participating in a photography and dive expedition was to capture a sample of an above and below portfolio of the Antarctica Peninsula. I soon realized that I was too ambitious. For the shoot, I had to carry a 30kg backpack of cameras, a pole cam for each landing, and I had to fight with an expedition leader who had a mission in life to make sure I failed.

Shooting in Antarctica is a challenge for the photographer and equipment to survive the elements; sub-zero temperatures, melting ice, powdery snow and volcanic ash don’t really go very well with cameras. To pursue better quality time with the animals and a space to work without the tourists, arrangements were made for me to go off on my own during shore excursions. On every occasion, the expedition leader-from-hell would disrupt the plan, and in one instance, he had me scamper in icy conditions suited up in a dry suit, lugging a polecam, underwater housing, 30kg backpack and dive gear from the dive deck to join the shore excursion group at the bow! I came to conclude that it was not freezing water of the polar region or the reptilian-like leopard seal that is dangerous, but the thoughtlessness of a dense expedition leader.

Nevertheless I persevered, grasping on every window of opportunity to encapsulate the splendor of Antarctica’s magnificent wilderness. With an intensity unfelt since puberty, I fought to retain the infinite impressions that flooded the senses.

Towering mountains rose abruptly out of the sea, shrouded with steep glaciers plundering down to deep freezing waters. Superlatives necessitate a new meaning. Sunsets expand the consciousness with colors that I have never seen before, bizarre and vivid, tinted in delicate shades of rose, orange, lavender and gold that never seemed to end.

Icebergs came in a myriad of sizes from the colossal to the petite in fanciful shapes and impossible hues of aqua, palest blue to mint green ... 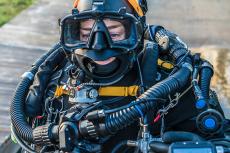 From the Tip of an Iceberg to My Tap Water: Diving the Arctic Underworld and the St Lawrence River
Travel & Trips 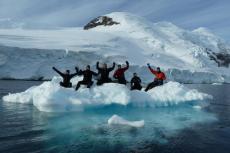