very now and then I get an assignment close to home, which means my dive buddy and I can usually load up the car with dive and photography gear, and maybe a kayak or two, and head out for a full weekend of adventurous exploring. If the location is exceptional, like an assignment to dive in Washington State’s San Juan Islands, we often allocate several days to experience all that’s available. When researching this unique area, I found there are over 170 different islands and reefs that have been named in the San Juan Archipelago. Of this spectacular array only four islands are serviced by the local ferry system—San Juan, Orcas, Lopez and Shaw—with daily departures from Anacortes.

This would be great if we wanted to do some shore diving, since the ferries haul automobiles, but boat diving was on our agenda. To accommodate, we hooked up with a group of divers leaving from Anacortes on the dive charter boat, Lu Jac’s Quest, run by Phil Jensen.

“Phil is an old sea dog, and I mean that in the best way,” said Ron Akeson, owner of the Bellingham dive store, Adventures Down Under (ADU). “On average, I book around 15 dive charters a year with Phil. He is thoroughly comfortable with being on the water and is very experienced. Phil is very low key, which has a calming effect on everyone around him. This is really nice if we are doing a tech dive out in the shipping lanes of the Strait of Juan de Fuca, and he is coordinating with captains of freighters and tankers to avoid our divers.

“He lets me choose where I want to take my groups and works with me to select a proper slack time of when to put the divers in, according to what the currents are doing. Since currents can be pretty tricky around here, the small groups of ten or so work well to keep track of everyone. His 42-foot (12.8-meter) vessel allows plenty of room to deal with all the gear or move into the cabin if it is raining.”

Lime Kiln Park. Our first destination was in front of the lighthouse at Lime Kiln Park on San Juan Island. It was a sunny clear summer day in June complete with a few squawking gulls in the distance and two bald eagles flying overhead, as we motored past lounging harbor seals and black cormorants. San Juan Island is the largest of the islands, with the dive site located on the northern side. This gave me plenty of time to interview other divers onboard and see why they like the San Juans so much.

Mike Meager and his dive buddy, Jim Copher, are regular customers of ADU, joining them almost monthly on their excursions into the San Juans. As an avid diver and an underwater videographer, Mike explained:

“I like diving the San Juans for several reasons but mainly because I am susceptible to motion sickness and because it is so beautiful here! The inland waterways of the San Juans are very protected, and the norm is flat calm or close to it. There’s rarely any swell. Also, the evergreen trees grow right down to the waterline, and during the summer, you can usually see Mt. Baker in the background, making it very scenic above and below the water.

“Once underwater, the invertebrate life is rich and thick wherever we happen to splash. There’s always something to film—be it nudibranchs, lots of anemones, crabs, the occasional harbor seal or sea lion, octopus, or lingcod.”

As we approached the lighthouse overlooking the dive site, my imagination ran wild, wondering how many shipwrecks might be hiding below. Or maybe this current affected site would be covered in life, similar to the sites around Victoria, British Columbia in Canada, only a few miles away. The flow of the current had not yet slacked, resembling a river of moving water full of overlapping kelp fronds.

Most divers wanting to venture underwater in this northwestern part of North America have come to respect the power of these natural current flows, appreciating the rich nutrients that feed such an abundance of colorful marine life. Therefore, waiting for slack (when the flow of water stops to change direction) is a common practice as part of the dive’s enjoyment. An experienced boat captain will know just when to put his divers in and for how long.

While we waited for slack, everyone donned their gear. The boat is set up so divers are positioned on the back deck where they can easily enter and exit the water. Once gear is on, you do a giant stride entry off the back between two ladders (which are pulled up and out of the way). Once in the water, you wait for your buddy to follow.

The water was clear and crisp at 48°F (8.8°C) as my dive buddy, Wayne, and I descended below the surface, following golden brown fronds of kelp down to 40 feet (12 meters) where the terrain was covered in large boulders on a gently sloping decline. A closer look revealed each of the boulders supported a vibrant collection of invertebrate life like small orange tunicates, yellow zoanthids and several different species of anemones. We were now within a forest of kelp along with a school of large rockfish that ignored us, as they hovered in mid-water.

Needless to say, I wasted no time with my Aquatica-housed Nikon collecting shots. Wayne had his Go-Pro camera and was already absorbed in watching a morning sunstar heading for the siphon of a buried clam. A pair of bright pink crimson anemones and a delicate white alabaster nudibranch caught my attention.

The kelp forest thinned out as we descending to 60 feet (18 meters), making it easy to locate a pair of wolf-eels peeking out from a den of overlapping flat rocks. Before long, two other divers joined us. The wolf-eels appeared very curious of their bubble-blowing audience but didn’t venture any farther from their shelter, perhaps because they may have been guarding a cluster of eggs or maybe just wary of the divers in general since this underwater site is rarely visited.

Staying at the same depth, we continued along a beautiful wall of large white plumose anemones that seemed to cascade down like a white waterfall. In the light of the video cameras, their long white columns and cotton-like plumes began to take on a regal appearance. Another section of the rock wall provided a foundation for clusters of yellow sponge, more crimson anemones, sea stars and deep red giant urchins within numerous cracks and jagged fractures. With the exceptional visibility, I could see (...) 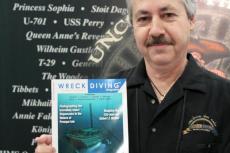 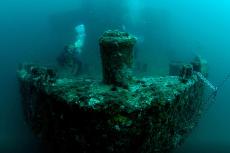