An international team of divers, supported by the Royal Canadian Geographical Society (RCGS), Shipwreck Preservation Society of Newfoundland and Labrador (SPSNL), and Ocean Quest Adventures, has confirmed the discovery of a World War II-era B-24 Liberator Bomber. The plane crashed upon take-off when the engine failed on 4 September 1943. The aircraft made a slow turn and barrel-rolled into Gander Lake, Newfoundland. The four-crew members did not survive.

At the time of the crash in 1943, military hardhat divers found the aircraft “Liberator 589D” on a ledge in Gander Lake. They attempted to attach cables to the fuselage to salvage the plane. They were also recovering the body of Squadron Leader John G. MacKenzie.

Unfortunately, at this time, the aircraft slipped off the ledge and sank into deeper water beyond the divers’ range. Due to poor visibility, extreme depth and cold water, the military abandoned all efforts after 12 days.

For more than nine years, a Canadian researcher and diver, Tony Merkle, has been trying to confirm the location of the Royal Canadian Air Force (RCAF) aircraft. Merkle joined the board of the SPSNL to obtain assistance to move the project forward.

Another SPSNL board member Kirk Regular used the RCAF crash report and performed a multibeam sonar survey in July 2022. During this time, he was working for the School of Ocean Technology at the Marine Institute, mapping the bottom of Gander Lake. The 3D images provided the exact location of the plane. Regular’s discovery of the plane’s location made diving possible.

SPSNL member Neil Burgess obtained the necessary archaeology permit from the Provincial Archaeology Office to dive the Liberator 589D wreck. In addition, the Great Island Expedition was invited to join SPSNL in the exploration dives, made possible by the support of Ocean Quest Adventures and the RCGS.

On 5 September 2022, the 79th anniversary of the crash, the dive team completed six technical dives to photograph and survey the site on a deep ledge between 37 and 48m (121 and 157ft). The dark, tea-colored waters presented challenging conditions. The water temperature was 5°C, and visibility was less than one meter. Divers found the aircraft upside-down and badly damaged. It sat precariously on the ledge. If the plane lost its perch, it might descend over 250m (820ft) to the lake’s bottom.

Images and videos from the dives on the wreck site have been donated to the SPSNL for future educational outreach.

The expedition team was composed of experienced divers from Canada, the United States and France, including: 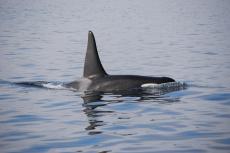 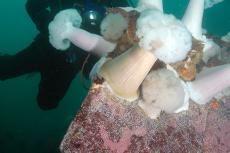 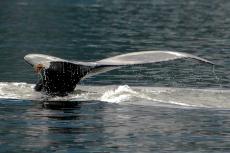 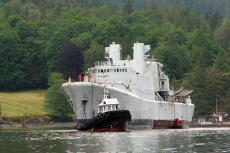