In World War I, unrestricted warfare meant ships that were traditionally off limits became targets for surprise attacks by German U-boats. Steve Jones visits two of the most endearing wrecks in the English Channel that were a direct result of this highly controversial policy. Lanfranc is a huge wreck that needs several dives to fully appreciate. Photo by Steve Jones.

An upright stern emerged through the grey-green water around 10m below me. The last time I visited this wreck on a cold October day, I was in total blackness at this depth, but today was different and the high sun overhead at last revealed the HMHS Lanfranc in its full glory.

Our group of divers paused for a moment to gain our bearings, an easy job with the shot line placed squarely on the rear of this huge ship. As we hovered, a large school of pouting (one of the cod family) swam around us, hiding the wreck from our torch beams and only parting as we began our long swim forward. We resisted the opportunity for further exploration at the stern.

Here, it was possible to enter the ship through a missing skylight and descend several deck levels to the dining area, but we wanted to see the entire ship, and even with a long slack water period, it would take an entire dive to get end-to-end. Lanfranc is one of those wrecks you need to visit multiple times.

The Lanfranc was a 6,287-ton former liner built in Dundee and commissioned by the British government in 1915 to serve as a hospital ship. On 17 April 1917, she set off in full Red Cross markings from Le Havre for Southampton with over 500 on board, including 387 patients from both Britain and Germany.

However, less than a third of the way through the journey and with no warning, a torpedo from UB-40 slammed into the port side between the engine room and the number 3 hold, causing a huge explosion. Lifeboats began to be lowered once Lanfranc’s speed had slowed, but the horror continued as one immediately sank, throwing the occupants into the sea from where they were picked up by other boats.

Lanfranc had only an hour left afloat, and in rough seas, the escorts put themselves at great risk to get the survivors off, and their quick action limited the loss of life to 34. Lanfranc’s assailant, UB-40, continued to wreak havoc amongst Channel shipping, sinking around 100 ships during its career, including a number of well-known wrecks on the southern coast of England, such as the Salsette. It was eventually scuttled in October 1918 during the evacuation of Belgium.

Continuing our dive, we swam forward to amidships where the wreck begins to twist. Here, we found machinery and fittings amongst the remains of the decking, which had started to collapse inwards. Near the area of the impact damage, we saw some of the ship’s contents scattered on the seabed at around 50m depth. With this wreck lying in French waters, the removal of artefacts is strictly forbidden.

As we proceeded toward the front deck, which was further twisted to starboard, the lines of the ship became recognisable again. Careful to avoid the snagged trawl nets in the steadily increasing current, we drifted off the wreck at the point of the bow and commenced our ascent with our slack water window now firmly at an end.

That month of Lanfranc’s sinking, April 1917, became the worst of the entire war for allied shipping, following an already disastrous March, during which 25 percent of all inbound shipping had been sunk. The resumption of “unrestricted” U-boat warfare on 1 February had been a gamble for Germany, which had to balance the increased damage to Britain’s shipping against the risk of incurring the wrath of the United States, currently still out of the war.

Normal rules of engagement, which required U-boats to surface and assure the safety of merchant crews before sinking the vessel, were viewed by German command as particularly dangerous for the submarine crews since escort vessels frequently accompanied merchant ships and the merchantmen themselves were often armed with guns that could easily damage a fragile U-boat.

It was believed these restrictions greatly neutered the effectiveness of the U-boats, and after much consideration, Germany put faith in unrestricted warfare whereby submarines could attack without surfacing, hoping that in conjunction with a bad harvest, it would quickly knock Great Britain out of the war.

With 500,000 tons of shipping sunk in both February and March, which increased to 860,000 tons by April, it left only six weeks of wheat supply left. Yet the gamble failed, Britain persevered, and by late March, seven US ships had been sunk, thus straining German-US relations beyond breaking point.

On 6 April 1917, US President Woodrow Wilson declared war on Germany, and even though losses remained high throughout 1917, the introduction of trans-Atlantic convoys slowly brought the situation back from the brink of disaster. All in all, over six million gross tons of allied shipping was lost that year.

The propaganda war between Britain and Germany clouds some of the facts that surround Lanfranc’s sinking. Under the Hague Convention, if an enemy suspected a hospital ship was being used for other military purposes, they had a duty to warn the ship and a right to inspect to determine compliance. However, Germany attempted to justify the sinking-without-warning of hospital ships by claiming they were being used to transport troops and ammunition over to France.

They had already declared such ships would be targeted, and Lanfranc had actually been withdrawn by Britain from the official list of hospital ships at the time of its sinking. Yet it cannot be disputed that it was carrying the Red Cross markings and was acting as a hospital ship, returning from France with wounded when it was targeted.

With their bright, easily identifiable livery making them vulnerable rather than offering protection, the designation of many hospital ships operating in the Channel was changed to “ambulance transports,” which were better camouflaged, defensively armed and could travel in convoy, yet still carry wounded. Survival rates improved, but there were still casualties and in August 1918, the Australian ambulance transport Warilda was sunk.

Also lying mid-Channel, a good three hours motoring from the southern coastal town of Brighton, Warilda is a substantial 125m long wreck that vies with Lanfranc for which is the better dive. The pair make an ideal two-day trip with a pleasant overnight stop in Fécamp, France.

Our group of divers descended to find the shot line lying on the hull near the seabed at 50m depth, so we made our way back to the deck, which we could see right across, with visibility on this July day exceeding 15m.

Ambient light levels matched those normally seen at far shallower depths. The ship’s railings glistened with orange and white anemones, surrounded by shoals of fish in a scene that was reminiscent of climates far warmer.

After several near misses in early 1918, Warilda met her end on 3 August when she encountered the UC-49 at the surface whilst en route from Le Havre to Southampton. Warilda, which was carrying 801 on board, tried to ram the U-boat unsuccessfully but UC-49 returned a torpedo that struck between the engine room and the number 4 hold, immediately killing 101 patients.

A survivor quoted by The Times on 6 August 1918 described the bravery of those on board: “It was a good thing that everybody kept their heads. The medical officials were magnificent; indeed, the whole of the staff did fine work in bringing the wounded men from the wards to the deck.

Man after man had to be carried just as he lay in his cot and it was a very trying task to get them into the boats.” Aid came from two escort ships. Had the Warilda not been able to stay afloat for several hours, many more lives would have been lost than the 123 that did not survive. Warilda’s assailant, UC-49, was also about to meet its fate, with the Warilda being the last ship sunk by this U-boat.

Following two further attacks, which damaged the Tuscan Prince and the Portwood, UC-49 was depth-charged by the destroyer HMS Opossum off Berry Head, Devon, and was lost with all hands five days after the attack on Warilda. It was the first U-boat successfully hunted with the use of hydrophones and the last one sunk in the Channel by surface vessels in World War I.

The wreck of Warilda lies on its port side and it is big! In places, it stands nearly 10m from the seabed. As we headed forward, cavernous open sections of the wreck invited further exploration. The area where the bridge once stood was a mess of tangled metal, but the bow quickly became recognisable, being quite intact and lying on its side. From here, the journey to the stern was a long one.

With there being so much to explore along the way, we took our time, since the rear of the ship could always wait for another dive. The seabed right along the length was strewn with wreckage. Although the superstructure had collapsed, recognisable features such as railings and deck machinery were commonplace.

Marine life was profuse throughout the entire dive. In addition to the masses of fish, lobsters or congers seemed to peer from every hole. Had we made it to the stern, we might have found a 4-inch rapid fire deck gun, one of the features that distinguished the ambulance transport from an unarmed hospital ship. The wreck of the Warilda is a dive site that once visited will not be forgotten.

Thirteen allied hospital ships were torpedoed in World War I, along with several more on all sides lost to mines, including the most famous of them all—the Britannic. Yet even after Germany declared its intentions to target these ships, there were several examples where U-boat commanders chose not to attack, as humanity prevailed against their orders.

Whilst the wisdom of hindsight reminds us of the titanic struggle between nations that was raging at that time, these orders went against the Hague Convention and were instructed by a group of men in high command who were suitably distanced from the immense suffering they would unleash on the helpless. Only history can judge the men who gave these orders. ■

The author gives special thanks to Terry Ayling for his tireless modelling, lighting assistance and endless patience. Steve Jones is an underwater photographer and journalist whose award-winning work has been published in over 30 countries during a career spanning three decades.

A true all-rounder, his assignments have included colossal battleship wrecks in the deep north Atlantic and sub-zero encounters with apex polar predators to equatorial seascapes awash with strong currents.

He is a Blancpain Edition Fifty Fathoms photographer, a field editor at the Ocean Geographic Society and a member of the Ocean Artists Society. His thoroughly researched writing covers both maritime history and marine ecology. 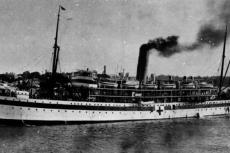 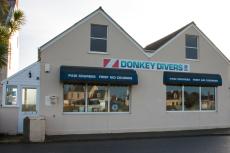 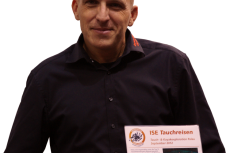