The WWI Disaster of RMS Lusitania

After the Titanic, the RMS Lusitania is probably one of the wrecks in the world which most captures the imagination. It was therefore a great and challenging endeavor for me to be able to see this wreck with my own eyes.

Diver with one of the davits on RMS Lusitania. Photo by Vic Verlinden.

He is the organiser of TekDive-Europe technical dive show. See: tekdive-europe.com.

Despite warnings from the German embassy in the American press not to start the crossing with the Lusitania, the ship was brought under steam on 1 May 1915. On board were 1,257 passengers and 702 crew members. The command was in the hands of Captain William Thomas Turner. The passengers on the Lusitania did not worry too much because it was assumed that the Germans would not dare torpedo a ship with so many American civilians on board.

The first-class passengers thoroughly enjoyed the luxurious interior of this beautiful ship. One of those passengers was Sir Hugh Lane, the director of the National Gallery of Ireland, who reportedly had brought paintings on board worth US$60 million. Among these alleged paintings were a Monet and a Rubens transported in lead tubes. When the ship approached the coast of Ireland after a trouble-free passage, it was reported that there was a German submarine nearby.

Immediately, Captain Turner had the lookout doubled. In the previous week, three ships had been torpedoed in this area, so the captain did not want to take any chances. The first warning about the presence of a U-boat came on 5 May, but there were also reports on 6 and 7 May.

At 2:15 p.m., the Lusitania was about 10 miles south of Old Head of Kinsale when the ship was hit by a torpedo between the first chimney and the bow. Immediately afterwards, a second powerful explosion occurred, which caused a lot of damage in the engine room. The ship was now keeling heavily, making it difficult to lower the lifeboats. At 2:26 p.m., after barely 15 minutes, the ship sank, and 761 people drowned, including 94 children. Of these victims, 124 were American. The American government was furious, but the Germans said that the ship had ammunition on board and therefore the torpedoing was legitimate.

The torpedo was fired by U20, under the command of Captain Lieutenant Walther Schwieger. In his report, he mentioned one single torpedo. The torpedoing of the Lusitania did not do any good for the German cause and was certainly the spark that led the United States to enter the Great War to defeat the Germans.

Later, there were deep discussions in the press about the fact that there had been a second explosion. This was attributed by the Germans to the transport of a load of ammunition during the crossing of the Lusitania.

First plans for an expedition

I had been looking for an opportunity to dive on the wreck of the Lusitania for a few years but could not find a team to go with me. However, in 2017, I saw a message about an expedition organised by Peter McCamley. He wanted to bring a team together to realise a project that would spread over several years. During the project, it was, among other things, the intention to shoot good 3D images of the wreck. After I sent an email to Peter, he agreed that I would come to Ireland to help on the boat.

Unfortunately, I would not be able to dive because I was not on the list of the permit applications. It is impossible to dive on the wreck without the approval of the Irish government and the American owner, Gregg Bemis. Even without diving, I definitely wanted to get involved in this special project, and at the end of July, I left in good spirits.

My plan was to take the ferry to Rosslare in Ireland in the French city of Cherbourg. It was about 650km to Cherbourg, and I still had 60km to go when I decided to leave the highway to have a coffee. When I hit a narrow road, I suddenly felt a loud bang at the bottom of the car. I got out, and when I looked under the car, I saw the oil running out of my carburettor. I had hit an iron pole on a small central reservation and my car was now unusable. I did have insurance but would never get to the ferry on time. My planned trip for 2017 was over.

In the winter of 2017/2018, Peter put together a new team, and this time, I was on the list to dive. I prepared for my trip well—physically and mentally, and with all my dive equipment in top shape. This time, the crossing went without any problems, and I was able to bring my equipment aboard our expedition ship, which was equipped with an elevator to pick up the divers.

The weather was very good with a soft breeze and sunshine. It was 24 September 2018, and today, I would make my first dive on the Lusitania. The team that first went into the water included Dave Gration and Kari Hyttinen who wanted to shoot 3D film footage of the bow of the wreck as they did the year before.

I was in the second team together with Steve Saunders. However, while we were still descending, we ran into the first team of two who were already heading onward. They showed us that the downline was not anchored on the wreck and communicated to us that we had to return. At that moment, I was at a depth of 70m and returned to the surface. This was a severe setback, and for the next few days, there was no possibility of diving due to the bad weather.

After five days, the weather got better, and we could try again. The downline had shifted, and a short time later, I was descending to the wreck. I had been working for years to realise this dream, and now I would finally see the wreck for myself. The visibility on the bottom was no more than 5m, and I immediately saw that there were a lot of fishing nets on the wreck.

I decided not to swim too far away from the ascent line. The downline’s treble hook was not far from the bridge in front of the wreck. However, it was difficult to orient myself. I did see one of the iron curved levers for the lifeboats. This was at the edge of the wreck, and I also saw a row of round portholes. These were still in the hull of the wreck, and I decided to follow them because there were fewer nets there.

When I followed the side of the hull, I suddenly came to one of the large entrance doors, which served to welcome the passengers on board. Along the way, I also saw large round bronze windows. This was not surprising because a large passenger ship like the Lusitania had hundreds on board.

I decided to turn right and swim back in the direction of the ascent line’s treble hook. On the way back, I saw that the wreck had suffered heavily from the currents and saltwater. However, it was high time to start my ascent. Twenty minutes of bottom time had passed quickly, and now a long decompression time awaited me. The next day, we dived again on the wreck, but time to explore the Lusitania was limited because I did not want to take any risks.

The long-awaited expedition in 2019

In the summer of 2019, I returned to Ireland to dive the wreck of the Lusitania again. I had prepared myself well, and Karl Van Der Auwera (my dive buddy of many years) had also come along for the expedition.

In the beginning of the trip, the weather was not good, and we could not dive. After five days, the weather got a bit better, and we decided to risk it. The downline’s treble hook was at the bridge again, and when we came down, I saw that the visibility on the wreck was also much better than the year before.

Karl unrolled the reel, so we could easily find the ascent line again. We could now explore the wreck in peace. Just by the ascent line’s treble hook, we found several rectangular bronze windows. These adorned the cabins of the first-class passengers. We also found one of the water reservoirs, which stood on the deck. Not far from there, we found two showers and a piece of mosaic floor from the bathrooms.

As we swam towards the bow, we found pieces of the wreckage littered with portholes of all shapes and sizes. On the bow itself, we recognised the ship’s anchor chain and the winch that raised the anchors. We also found two bollards around which ropes were still twisted. Pieces of the wooden floor on the foredeck were still intact.

Visibility at this location was at least 8m, which is exceptionally good on this wreck. Over the following days, we did more dives and thousands of pictures were taken by the different teams.

After four days of consecutive dives at a depth of 90m, I had had my fill of diving the wreck and needed to take a rest. However, it was a priceless experience to be able to participate in this wonderful adventure, and next year, we will definitely try to return to explore even more places on the wreck. It is also our intention to bring objects from the wreck to the surface in an archaeologically responsible way in the future. These will then be exhibited in a new museum to be built in Kinsale. ■

Denmark's Wrecks: A Selection from WWII back to the Age of Sail
Wrecks & Archaeology 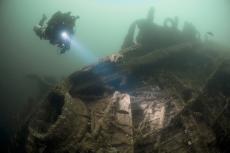 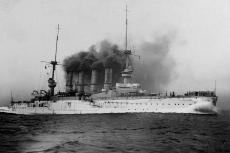