It is estimated that hundreds of thousands of tons of ghost nets lie at the bottom of the Baltic Sea, often caught on shipwrecks, many of which are historical in significance. The Baltic Sea Heritage Rescue Project brings together volunteers from all over the world with the drive to locate, document and remove such ghost nets from wrecks in the Baltic Sea, thus saving marine life, protecting the wrecks and keeping their stories alive. Sabine Kerkau, one of the co-founders of the project, reports. A ghost net at the stern of the Elbing IX floats 20m above the wreck, trapping and killing marine life

You can come across them on any walk along the beach—small pieces of torn fishing nets. But they are just the tip of the iceberg, here in the Baltic region. Hundreds of thousands of tons of ghost nets are most likely lying on the bottom of the Baltic Sea or have gotten stuck on shipwrecks.

With their weight, these nets not only destroy wrecks—some of which are historic—but are also a deadly trap for fish, porpoises, seals and birds, which get caught in them and die miserably. Meanwhile, with ocean currents and the constant movement of water around them, small pieces of plastic from the nets degrade and accumulate as microplastics in fish, which we consume, and thus, accumulate also in us.

The Baltic Sea Heritage Rescue Project (BSHRP) is a project of the non-profit German association Baltic Sea Nature and Heritage Protection Association (BSNHPA), a registered organisation. People from many countries who care about protecting the Baltic Sea above and below the water’s surface are volunteering for this project.

We find and remove lost ghost nets, searching, identifying and documenting wrecks along the way, to protect them and keep their histories alive. The BSHRP works closely with universities, government ministries, archaeologists and museums.

The dive expeditions are carried out at depths of up to 100m. Only divers who are trained and experienced for the respective depths are deployed.

• Tracking down ghost nets, salvaging them and ensuring that they are properly disposed

Our campaign against ghost nets on the deep wrecks of the Baltic Sea started five years ago in Lithuania. At first, we just wanted to draw attention to the problem, using photos and videos that documented the extent of it. However, we quickly realised that this was not enough. And so, we founded the BSHRP.

One of our goals is to search for, identify and document wrecks that are deeper than 40m. In addition to the condition of the wreck and the artefacts present, this documentation also includes an inventory of the ghost nets that we find on the wreck.

We cooperate with the archaeological department of the University of Klaipeda, the Lithuanian Sea Museum, various government ministries and the Estonian Heritage Board. Under strict controls, and with the requirement of not damaging the wrecks—some of which are more than a hundred years old—we are allowed to salvage ghost nets from the wrecks.

The goal of our project in 2018 and 2019 was to free the wreck of the freighter Elbing IX, which sank in 1914, from ghost nets. The wreck is 80m long and lies at a depth of 50m. It was wrapped in nets from bow to stern. Some of the nets still had floating buoys, which ensured that the nets did not lie on the wreck but floated up to 20m above the wreck. This was an extremely dangerous situation for all sea creatures and especially us divers. The treacherous conditions under which we had to work on the wreck required the use of only very experienced divers.

On each dive, we documented our work on the wreck, locating and checking the nets to be recovered next. One team member took care of the safety of the divers underwater. The recovery of the nets at the surface also had to be documented. Reports for the media and our collaborating partners also had to be written.

The successful implementation of our goals is only made possible with a strong team and reliable partners. Due to the challenging nature of the work, we must require the highest performance level of both the divers who help us and our equipment. We are particularly grateful to Bauer Compressors for their many years of support. We must be able to rely on a working compressor and clean air to ensure the safety of our dives.

In addition to the factors that we can partially control, such as the selection of divers and equipment, there are many things over which we have no control, upon which the success of our project depends very much. Weather, the Covid-19 pandemic, and the willingness of experienced divers to support us for the duration of our projects, are three good examples of this.

For our six-week project in 2019, we lost two weeks, which were cancelled on short notice, due to bad weather conditions. Then another week was cancelled, when I found myself alone on the ship, as no one had announced the trip. In the remaining three weeks, we managed to reach our goal for 2019 to free the Elbing IX from several tons of plastic waste in the form of ghost nets.

In the two pandemic years of 2020 and 2021, the implementation of the project proved no easier. Travel restrictions, quarantine rules and additional challenges repeatedly put a damper on our plans. Nevertheless, in these two years, we were able to almost completely clear two wrecks, located off the Lithuanian coast, of the lost fishing nets trapped on them.

Since 2021, we have also been active in the German Baltic Sea, off the island of Rügen. In May and October, we salvaged nets from the wreck of the Flying Dutchman. More than 3.5 tons of nets were removed from the wreck. The Flying Dutchman is now completely clear of nets. But there is still a lot to do here. So, our work at Rügen continues, and we were able to gain Greenpeace as a collaborating partner. Greenpeace will support us with an experienced dive group.

In Lithuania, we work on very old wrecks, which means we must depend on permits from local authorities and cooperation with the university and the Lithuanian Sea Museum. Some of these partners approached us with great scepticism in the beginning. They saw divers as a greater threat to the wrecks than the ghost nets were. Indeed, divers were equated with looting and destruction. But through our work and many discussions with these partners, we are well on the way to changing this mindset. Hence, another goal of our BSHRP is to protect the wrecks from looting and destruction.

We are often asked: “Why Lithuania?” and “Why keep to the eastern Baltic Sea?” The answers are simple. We chose Lithuania because in this region, it was the first time we had been confronted with the problem of ghost nets on such a large scale and nobody wanted to do anything about it. As to keeping to the eastern Baltic Sea (i.e., Lithuania and Rügen), it is because sustainability is important to us. This is only possible if one is persistent and keeps talking and informing people about the problem.

The BSNHPA provides some of the financial support for the projects’ ship charters, special equipment and transport of the nets to processing companies. We finance most of our work out of our own pockets. Anyone who would like to help with operations can do so by becoming a member of the BSNHPA or by making a donation to the association. We also need divers at all training levels and non-divers who can actively support us during the project weeks.

For more information, visit the website of the Baltic Sea Heritage Rescue Project at: bshrp.org, or email: mail@bsnhpa.org.

Sabine Kerkau is a German technical diver, dive writer and underwater photographer based in Switzerland. Kerkau was inducted in the Women Divers Hall of Fame in 2019. For more information, visit: facebook.com/SabineKerkaurebreatherdiving 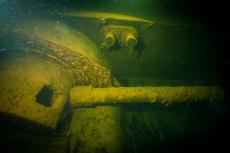