The Clowns of the Ocean: Anemonefishes of the Indo-Pacific

Anemonefish are aptly referred to as "clownfish" because of their swimming behavior. It is interesting to note that the different varieties of clownfish exhibit very different characteristics. Some are shy homebodies, some can be very aggressive, and some even share their host anemones with other species. A professional underwater photographer and photojournalist since 1980, Steve Rosenberg has produced over 20 destination guide books in print for international publishers including Lonely Planet, Cruising Guides and Aqua Quest Publications; as well as hundreds of articles for US and international publications.

With thousands of his images appearing in books and magazines worldwide, Rosenberg has won 250 awards for his imagery in international competitions.

In 2013, Rosenberg assembled a new team of professionals for the purpose of producing interactive e-books to be used as scuba and travel guides, as well as powerful marketing tools for destinations, resorts and liveaboard operations.

The most recent guide is the NATJA Gold Medal award-winning Dive and Travel Galapagos, which was released in August of 2017.

My observations of anemonefish have taken me to dive destinations all over the Indo-Pacific, including Australia, the Philippines, Indonesia, Micronesia and Fiji. In these areas, there are a wide variety of anemonefish to observe and photograph.

The entire Indo-Pacific region abounds in unique and beautiful varieties of vertebrate marine life. Scuba divers from all over the world are drawn to the Indo-Pacific by the excitement and diversity found beneath the surface of the ocean. However, the diminutive anemonefish are identified with this area perhaps more than any other species of fish, and are perhaps most often the photographic subject used to stimulate an interest in diving there.

In nature, anemonefishes, or clownfishes, are always found in close association with large sea anemones, which in turn are found on relatively shallow coral reefs. It is the symbiotic relationship between the fish and anemones that has made this species of fish of particular interest to the scientific community.

In all, there are approximately 27 different species of anemonefishes, which are found living with some 13 different types of anemones. In the wild, adult clownfishes are never found without an anemone. They spend most of their time swimming in and around the tentacles of the anemones, laying their eggs beside the anemones and rarely venturing far afield. When alarmed, anemonefish will take shelter amongst the anemone’s tentacles.

These fishes develop a special mucous layer over their bodies that protects them from the dangerous stinging nematocysts that are contained in the tentacles. In exchange for this protective shelter, anemonefishes feed, oxygenate and remove waste material from their host anemone. It is believed that some of these anemonefishes will also protect the anemones from natural predators such as butterflyfishes.

The anemonefishes are small brightly colored fishes. Their colors range from hues of brown, orange, pink and red with one or more bars or stripes of black, white or light blue for each individual species. These fish swim with a distinctive rising and falling tilting motion, which has earned them their common nickname, “clownfish.”

Except for a brief larval period, during which it simply drifts among plankton in the water column, anemonefishes are rarely found without a host anemone. Such a relationship between two very different types of animals is known as symbiosis, or “the situation where two species of organisms live together in a union that is beneficial or necessary to both.” It is this fascinating relationship between fish and anemone that attracts the most interest.

Sea anemones are members of the phylum referred to as Cnidaria or Coelenterata, which include a large and varied group of relatively simple, yet versatile, marine animals, armed with microscopic harpoon-like stinging capsules known as nematocysts or stinging cells. Sea anemones possess hundreds of tentacles, and they can sting prey by releasing venom through these tentacles.

Divers who have come in contact with burning fire coral or stinging hydroids are certainly aware that the nematocysts are discharged when stimulated by the contact of other organisms. The nematocysts are especially dense on the surface of the anemone’s tentacles. The sea anemone, which is carnivorous, seizes and immobilizes its prey with these stinging tentacles and then uses the tentacles to pass the victim to its mouth. It is very interesting that the anemone fishes flourish in this inhospitable environment that is so deadly to other fishes.

Anemonefishes, like all other fishes, have a layer of mucus covering their skin that prevents the anemones from stinging them. The mucus layer of the anemonefish is thicker and chemically different than the mucus covering of other closely related fishes, which do not live with an anemone. It is believed that this covering is acquired by the anemonefish during its initial contact with its host anemone.

Presumably, the anemone alters the mucus covering of the fish, or adds to it in some way, so that it provides a type of cloaking device for the fish. It is believed that mechanical stimulation alone is not enough to trigger the firing of the nematocysts, but that it has to be a combination of contact together with a certain chemical stimulation. Thus, the anemonefish avoids being stung because the anemone, chemically speaking, does not know it is there.

Anemonefish begin their lives as males and then undergo a complete physiological change in their reproductive organs, thereby becoming females. Although the change is physiological, it is brought about by social signals within the family of anemonefish living in a single anemone. Anemonefish are monogamous, with each anemone inhabited by only one adult spawning pair of a given species. The female is usually somewhat larger than the male.

When juvenile anemonefish reach maturity, they search for an unoccupied anemone. If, however, something happens to the female, the breeding male undergoes a physiological sex change by becoming the breeding female, and the largest juvenile quickly becomes the breeding male.

It is easy to see the benefits of the anemonefish having both male and female sex organs. They are confined to their protective anemone for safety, and the second-largest adult male can quickly assume the role of breeding female if something happens to one of the adult pair. Thus, there is always one female and a dominant male, and this maintains a stable social structure among the fish living in one anemone.

Anemonefish are nest builders. The pair of spawning adults selects a nest site on the substrate, next to the base of their host anemone. The fish will actually nip at the bottom edges and tentacles of the anemone to get it to retract so that the nest site may be exposed and cleaned. The eggs in the nest are mouthed and fanned by the adult male during the incubation period.

In Fiji, I recently observed a pair of orange-fin anemonefish tending to the nest site laid on the substrate next to the host anemone. There were four fish in the one anemone: two adults and two smaller juveniles. The anemone itself was approximately 20 inches in diameter. The female, measuring approximately four or five inches in length, confronted divers three to four feet from the anemone and made loud clucking noises. On numerous occasions, both adult fish left the vicinity of the anemone to try to drive the divers off.

Once, I observed the larger fish actually biting air bubbles. Even when the divers swam away from the anemone, the adult fish patrolled an area, which was much larger than the actual size of the anemone, sometimes swimming as far as six to eight feet from its protection.

The second largest of the pair, which I presume was the male, was most attentive to the nest site, guarding it against intruders and keeping it cleaned. He seemed reluctant to stray far from the nest and the protection of the tentacles of the host anemone. Each time the male reached the area of the nest, he would appear to either nip at the substrate around the nest or mouth one or more of the eggs.

One of the most aggressive species is the saddleback anemonefish, Amphiprion polymnus. When they are protecting their eggs, they will swim up to 10ft away from their host anemone to chase or confront divers. It is not unusual to have them nip at the tips of your fingers to the point of drawing blood. Saddleback clownfish usually inhabit anemones that can be found on flat sandy areas, away from the main reef structures.

The alterations to its mucus covering brought about by its interaction with the anemone may also make it more resistant to skin diseases and parasites. What is not so apparent is what benefits are derived from the relationship by the anemone. In most cases, however, while the anemone’s association with the clownfish may be of some help, it is certainly not necessary to their existence.

Photographing anemonefish often poses problems because the fish often appear to be constantly moving and hiding. However, if you take your time to observe a family of anemonefish, you will often notice that they swim in patterns. Also, as they get used to your presence, they will eventually no longer perceive you as a threat and let you get closer.

While diving in the Indo-Pacific, I have observed numerous marvelous species of anemonefishes and casually observed many of their idiosyncrasies. Nature once again has outdone herself in creating such a truly beautiful and interesting animal. Marine biologists have only scratched the surface in learning about these fishes. I look forward to seeing more varieties of these special animals and watching their antics, which clearly give rise to their reputation and appellation as the clownfish of the oceans. ■ 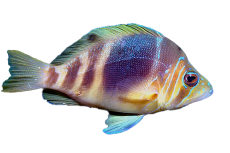 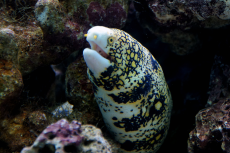 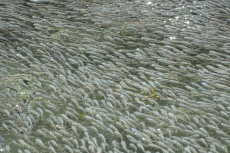