Forty-two miles off the Egyptian coast, the Brothers Islands rise up from the floor of the Red Sea 800 metres below, forming two small, flat tabletops surrounded by steeply sloping fringing reefs. After six years of almost only diving from RIBs and spreading my clothes around my house, villa or hotel room, I decided it was time to see if I would enjoy a week on a boat with a bunch of strangers. As a frequent solo traveller, I wondered whether the close confines of a cabin with a random snorer would see me sleeping on the deck by the second night. The allure of remote dive sites, unreachable by day boat, was strong enough for me to give it a go.

The Brothers Islands have the only reefs around washed by strong nutrient-rich currents. I was attracted by their reported features combining soft corals, pelagics, sharks and two wrecks in good condition.

The larger of the two sea mounts— cunningly named Big Brother—is approximately 300 metres long and one kilometre away from its sibling. It has a lighthouse and a 12-man army garrison. It would be a great location for a back-to-basics television series, such as the reality TV show of the same name.

I was the last to arrive at the harbour in Hurghada the night before the departure of the liveaboard. All the other guests had gone to their cabins already. I was greeted and briefed by one of the dive guides, Mimo, with a shining pate and wide smile. Over a welcome glass of fresh fruit juice, he explained where to stow my dive gear and gave me some welcome news. The 20-guest boat only had 12 passengers, and so, I would have one of the eight below-deck twin cabins to myself. No sooner had I littered the spare bed with camera bits, books and t-shirts, when I was introduced to Karim who kindly informed me that some dinner had been kept for me and was waiting for me in the dining area. Splendid.

Covering six metres of the eight-metre width of the MY Blue Pearl, the mid-ship dining area was an open plan affair adjoining the lounge that led onto the outdoor dive prep area at the stern. In the wall towards the bow was a magic hatch through which Karim or his brother Karemi, the other steward, would receive platter after platter of food from Chef Wael in the kitchen. Before the bow on the 36-metre long main deck were the crew quarters and rope storage area, and a small deck used at prayer time.

After having a read the safety notices and emergency action plans pinned up next to the flatscreen TV in the lounge, I went outside and up the stairs to the shaded rear chill-out deck, did a circuit passing the portside double cabin, the bridge, the front sundeck, the starboard double cabin, back astern and then further up to the flybridge. Even if I had had to share, there was actually plenty of room to find some personal space.

As Karim asked me how I would prefer my breakfast eggs the next morning, I took in my fellow shipmates, all liveaboard veterans and mostly return customers. We were an eclectic, if slightly Germanic, bunch—a German-Dutch couple, two German father-and-son combos, an Austrian quartet made up of a father, his son, the son’s wife and a friend. The 12th man was James, a middle-aged, Libyan-based Scottish teacher, and naturally, my buddy.

Seated in the lounge, Pia, the trip leader and diving instructor, took us through the boat and dive safety briefings. Given that we’d be at least five hours from the coast, the equipment was reassuringly plentiful and in good condition, the briefings friendly but to the point.

Pia laid out the itinerary in her “best Bavarian English, ja?” It was simple. Today would be spent on the coast diving at Gota Abu Ramada to check our gear, buoyancy and to get to know our buddies, as habitually strong currents off the isolated Brothers Islands would be no place for faffing, and to do a night dive before heading east overnight.

Gota Abu Ramada is a shallow site, no deeper than 13 metres, with a large Australia-shaped reef with two large bommies off what would be the Perth coast (to the WSW). It was ideally suited to its purpose with no current, clear waters, small schools of blackspotted sweetlips and spotfin squirrelfish, morays, crocodilefish and a large school of yellowtail barracuda and goatfish upon which to get reacquainted with camera settings.

An artificial shark stuck on a knife—part (...) 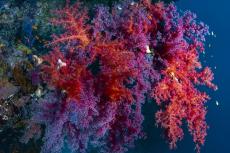 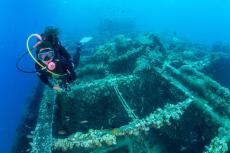 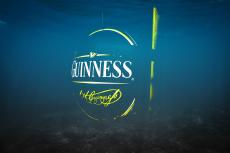