It’s fair to say that Dr Terrence Gosliner has developed a healthy obsession with Anilao over the years. He is the Senior Curator of Invertebrate Zoology at the California Academy of Sciences, overseeing the scientific research programs and guiding the Academy’s efforts to discover new knowledge and help promote the preservation of life’s diversity. He is also a world-leading expert on nudibranchs so some would say it was therefore an inevitability that Anilao was going to keep him and his team busy for many years! SJ: You’ve been visiting the waters near Anilao for many years but what led to you first coming to this area?

TG: Back in 1992 I was doing a lot of work in Papua New Guinea around Madang—that was actually the first area in coral triangle that I had worked in and I thought the marine biodiversity was extraordinary. But then one of my friends suggested that I visit Anilao, saying it was on another level again. I went and I was immediately hooked. There were just a handful of resorts back then, it was a lot more rustic. We established ourselves with one of them and used that as our base for operations in the region. I’ve been back around 30 times since!

SJ: What were the circumstances that led you to realize the richness and importance of the marine environment in this region?

TG: Even during the first dive it was evident this place was special. Evidence of the diversity was just there, right in front of us. Half of the animals we were seeing were new species and I was finding so many I was up till 2:00 in the morning just documenting our findings. The pace of discovery became so fast that it was impossible to keep up. Anilao just blew me away!

SJ: What factors contribute to this area having such rich marine biodiversity?

TG: There are several factors that combine to create the uniqueness in this region. First of all, the area has been very geologically stable for tens of millions of years compared to other regions that have experienced far more geological upheaval. The deep water upwelling brings nutrient rich waters into the area and this is all helped by very strong currents. I call this area the Apex of the Coral Triangle.

SJ: What’s your view on the success of the MPA’s in the area and why is it so important that this area is protected? Given its position in the coral triangle what could be the potential impact to other regions if this area is not properly protected?

TG: As recently as 2007 questions were asked about whether the MPA’s were making a difference as there was pressure to relax the no-take controls. However there is clear evidence that there is a fish factory effect in Anilao and the MPA’s are the only areas where there is dense fish life. The fish seeding going on here is vital for surrounding regions, and there would be a cascading impact to biomass diversity and density if these controls were not upheld. Even if you move a few hundred metres away from the MPA, the biomass decreases. The conclusion is that the MPAs have to be preserved. The MPA’s and associated conservation initiatives have also been very effective in reducing highly destructive fishing practices such as dynamite fishing—I used to hear the bombs go off a lot when I first started visiting. We continue to make recommendations for increasing the MPA’s as it’s clear they are having a highly positive effect.

SJ: You’ve been documenting nudibranchs in this area for a long time—how many species have been found here and did you discover new species?

TG: The official tally of nudibranchs and their relatives in the Verde Island Passage and Anilao area is 884 species and this may have increased by the time you go to press! This is actually the highest on the planet and I am sure more will continue to be discovered. In fact in April this year we visited for two weeks and added another 50 species to the tally. On average my team and I find one new species of nudibranch per dive. Even more incredibly, more than 50 percent of the 884 species are previously undocumented—they are newly discovered species. On every dive it is like a pack of cards has been reshuffled as the species we are seeing changes so frequently. Interestingly we compared Anilao with that other biodiversity hotspot, Raja Ampat and we found that Anilao had twice the rate of species accumulation of nudibranchs.

SJ: Any other interesting finds you’d like to tell us about?

TG: You bet there are! On the last expedition Some of the most interesting finds were a brand new species of heart urchin which took our own global urchin expert several days to classify—its closest relative is only found in fossil records and it’s a real missing link—a totally new species! We feel that Anilao’s prominence as the center of the center of marine biodiversity is also seen in urchin species. There is a growing feeling that Anilao is the most remarkable we have ever seen.

SJ: Finally, what is your perspective on the overall outlook for Anilao?

TG: Very positive—the local community takes seriously the effective management of marine resources. More moorings are being added and the local residents listen. Dive fees being channeled back into conservation and enforcement, and the meetings are run democratically. I continue to be impressed with the local communities attitude and understanding of the marine resources importance to the economy and the need to protect it.

Dr Gosliner’s field studies have uncovered more than 1,000 new species around the world. He also has extensive experience in building collaboration to support sustainable management and conservation of the rich reefs of the Philippines and is a champion of educational outreach. He has published more than 150 scientific papers and five books thus far in his career. n 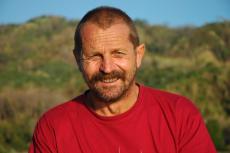