In the future, with a recently developed imaging technique using squid ink, trips to the dentists may become less of a pain (literally).

To diagnose gum disease, dentists insert a thin metal probe between the tooth and gum to measure the amount of gum that has shrunk back from the tooth. The depth to which the tool can be inserted indicates the severity of the gum disease.

Apart from being invasive and uncomfortable, this method of diagnosis is sometimes painful for the patient. In addition, the measurements are viable, as the probe can measure only one portion of the tooth at a time.

A nanoengineering professor at UC San Diego's Jacob School of Engineering, he and his team developed a method of using squid ink to refine the procedure.

It involves the patient rinsing his mouth with squid ink mixed with water and corn starch. The melanin nanoparticles in squid ink get trapped in the pockets between the teeth and gums. The dentist would then shine a light signal onto the tooth. This causes the squid ink to heat up and expand, and this creates pressure differences in the gum pockets that dentists can detect using ultrasound.

Besides being non-invasive and painless, it is also more accurate than the current method of diagnosis. This is the ability to measure the entire pocket of every tooth. In the current method, the technician may insert the probe at just the left, right or central portion of the tooth width (of one tooth). So if the pocket happens to be deeper in the other portions that are not probed, it will be missed out in the examination.

"It is the difference between looking at a dark room with a flashlight versus turning on the entire room lights," said Professor Jokerst, in a YouTube video.

“It’s remarkable how reproducible this technique is compared to the gold standard,” said Professor Jokerst.

However, don't expect your dentist to be using this new method any time soon. The technique still needs to be further refined—by improving the taste of the squid ink oral rinse, replacing the laser with inexpensive LED lights, for example—and human trials need to be first conducted. 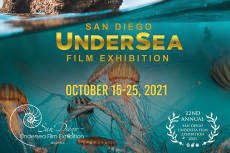