Ming Pottery Wreck: Exploratory Expedition in the Gulf of Thailand

There are many benefits to living in Asia. One advantage is that the waters around Asia still have countless numbers of unexplored shipwrecks. As a certified technical diver and an explorer at heart, the Gulf of Thailand has been my playground. During my stay in Thailand, I have had the opportunity to meet and dive with some of the nicest people. I have fond memories working with members of the Thailand Underwater Archaeology Division, also known as the UAD. The UAD office and museum are located in a small town called Chanthaburi, which is located about a 251km, three-hour drive from Bangkok. At the museum, you can see displays of ancient pottery, which have been surveyed and excavated from some of these wrecks.

People are led to believe that it takes costly side-scan sonars, ROVs and other expensive equipment to locate wrecks. But I have discovered that there is a much cheaper and easier way of locating wrecks. In Thailand, the best source of finding a wreck can be found at your nearest fishing village where fishing boats are kept.

The waters of the Gulf of Thailand average between 50 to 70m in depth. At these shallow depths, fishing boats are able to drag nets to scoop up fish. When dragging nets, the nets will sooner or later snag onto wrecks. The boat captain will then log these locations in order to avoid destroying nets in the future. These marks also identify where one will find the most abundance of fish. One of these fishing-boat captains, whom I have known for many years, contacted me one day to let me know that he had a couple of new marks for me to check out.

So, over a period of two months, a new wreck exploration trip was planned. I contacted a few of my local technical diving friends: Tim Lawrence, Andrew Moore, Oliver Zaiser, Siwat Worachananant (archeologist) and Sira Ploymukda (a member of the Thailand UAD). An expedition boat was booked for 25-30 September 2020, allowing us four days of diving. The farthest wreck we would explore was approximately 18 hours from shore.

In the week leading up to the trip, all of the team and dive planning, tank filling (trimix and decompression mixes), and equipment preparation took place. There would be five trimix closed-circuit rebreather divers and one open circuit trimix diver on the trip.

In order to explore the new wreck and cover the most area, we divided divers into three diving teams. Team One would consist of Worachananant and Ploymukda; Team Two, Zaiser and myself; and Team Three, Lawrence and Moore. The teams would stagger their entry times, allowing for one team to help the others in and out of the water. In doing so, we would also leave divers on the expedition boat in case of an emergency. Lastly, the teams decided on 30-minute bottom times for each dive, with total run times of around 100 minutes.

The expedition boat was scheduled to set sail around 8:00 p.m. on 25 September. Team members arrived two hours early, giving us time to load the boat and get settled before departure. Once the boat was loaded and everything was strapped down, the boat finally set off to the first site.

As the expedition boat arrived at the first wreck site on Saturday morning, the divers were just finishing eating breakfast and cleaning up. The captain placed a dropline and anchor right next to the wreck site and positioned the boat next to the surface marker buoys. Dive team members prepared the equipment and had one last team briefing to make sure everybody knew the plans for the dive.

The first team (Worachananant and Ploymukda) entered the water. At the surface, the last equipment and buddy checks were made prior to the descent. Team One then laid a line from the anchor line to the wreck, allowing others to follow. Zaiser and I, in Team Two, would retrieve this line when we were on our way back to the anchor line.

About an hour later, all of us were back on the boat, with a lot of talk and laughter going on. Once the equipment was cleaned and put away, we reviewed the underwater videos and photographs taken at the site and discussed what we had stumbled across. Ploymukda said he believed this wreck dated from the Ming Dynasty, approximately 300 years ago.

Later in the evening, swells and winds started picking up. This is something you do not want to see when you are this far away from shore. The boat captain gave us the latest weather report, which said the weather was going to get worse and not better. So, we held a group meeting and planned what our goals would be for the rest of the trip.

The team decided to cut the trip one day short. In the time remaining, we would dive the new suspected pottery wreck as well as the HTMS Pangan, which was a Thai naval transport vessel that sank in a storm in 1961.

The second day’s dive was on the HTMS Pangan, and it went off without a hitch. The wreck was fun and easy to dive. Once everyone was back on board, we headed to the last dive site.

On the morning of Day Three, the weather calmed down, giving us a window in which to dive. After everybody finished breakfast, we prepared for the last dive. The first team down would be Worachananant and Ploymukda, followed by Zaiser and myself, and finally, Lawrence and Moore.

Team One entered the water with no issues. As Zaiser and I started to descend, we passed Team One as they were coming up. They signaled to us that we were not sitting directly on the wreck site. I signaled to them that we would continue down and search in another direction.

As we neared the bottom, I noticed that Zaiser was coming down rather slowly, and he was also looking at his computers. I sensed that he was having issues with his rebreather, so I stopped to check on him. I signaled to Zaiser to find out if everything was ok, but he signaled to me that he was having problems. I decided that it was best to call off the dive and come back another time. Better to be safe than sorry.

Once we completed our decompression stop and reached the surface, I signaled to Lawrence that we were not on the right location but very close. When we got back on board, Worachananant told me that his team had seen two large pottery vases, but that was all. Then the weather started to change, and not for the better. So, Lawrence and Moore decided to sit out their dive.

Since the weather was getting worse, we decided to call off the trip. Everybody packed up their equipment for the long 12-hour ride back to port. ■

Currently based in Thailand, American pioneer technical cave and deep wreck diver Bruce Konefe is a sidemount and rebreather Instructor Trainer with over 25 years’ full-time experience planning and organizing the most ambitious technical diving expeditions throughout most of Asia. In addition to planning and organizing expeditions, Konefe has six years’ experience as an Instructor Trainer Director. For more information, please visit: deeptecdiver.com. Closure of Guadalupe Island for divers cause of great concern for the sharks
30 Jan, 2023 - 21:33
END_OF_DOCUMENT_TOKEN_TO_BE_REPLACED
Advertisement 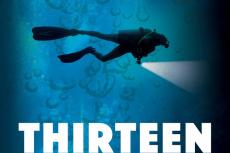 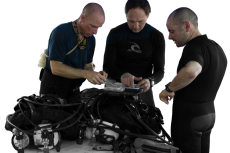 Getting the Boys Out: Tham Luang Cave Rescue
Tech and Training 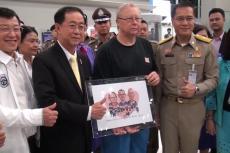 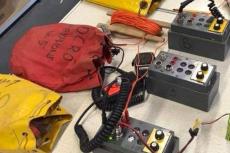