"Tasmania is a secret garden at the edge of the southern ocean. Every dive in Tasmania displays an exquisite combination of lyrical beauty and the wistfully bizarre." More than 12,000 unfortunate souls were incarcerated in sometimes brutal conditions until the cessation of transportation from England and the closure of Port Arthur as a prison in 1877. Tourism, farming, forestry and fishing support today’s inhabitants, many of whom proudly claim convict ancestry.

More than 12,000 unfortunate souls were incarcerated in sometimes brutal conditions until the cessation of transportation from England and the closure of Port Arthur as a prison in 1877. Tourism, farming, forestry and fishing support today’s inhabitants, many of whom proudly claim convict ancestry.

The area offers fabulous scenery; Eucalypt forests hug the massive cliffs and the few protected bays. These spectacular towering cliffs, up to 300 metres (1,000 ft.) above sea level, continue underwater and combined with the rich invertebrate life give spectacular diving attracting divers from throughout the world.

The geology of the region is primarily mud stone, sandstone, dolerite and granite that has, in some areas, been eroded to a very large degree offering huge caves, caverns and passageways.

The Tasman Peninsula, by nature of its topography, is mainly only dived by boat. Eaglehawk Dive Centre runs tours of the east coast of the peninsula from their catamaran dive boat.
Waterfall Bay is considered one of best diving areas as it is only eight minutes by boat from the jetty in Pirates Bay and offers a range of sites depending on the level of experience of the diver. One of the most popular dives for open water certified divers and above is Cathedral Cave.

Of the numerous caves that are dived, Cathedral is one of the most spectacular as it consists of a massive entrance tunnelling back into smaller caverns with many narrow tunnels and cross passages. The walls are covered with an incredible diversity of colourful invertebrates many of which are typical of deeper temperate waters. The Dive Centre provides a guide for the tour of the Cathedral Cave system.

The boat can be moored off the walls under Cathedral Dome allowing easy access to the start of the system. The tour leaves the surface and descends to the bottom below the magnificent Cathedral Arch. The maximum depth during the dive is 21 metres. From the arch, the group is lead down the Aisles to the entrance of the Catacombs. This is an area of tunnels that are just big enough for one diver at time. Once inside the main chamber, the guide then leads divers through the labyrinth to what is commonly called The Back Door.

Retracing the passage to the exit point of the Catacombs, divers find sunlight streaming down into the entrance of the passage to Revelation Bend. This is one of the most awesome underwater views that most divers will ever see. Known as the Skull Cave this view is featured with other photos in David Doubilet’s article, “Beneath the Tasman Sea,” in National Geographic Magazine in January 1997. The narrow passage up to the bend is dark and barren with a gravel bottom. When the guide stops at the bend, he signals divers to turn off their lights and swim past. The cavern, with two huge eye holes looking out into the light beyond clouds of bull's-eyes darting to and fro, takes most divers' breath away.

At this stage of the dive, we turn away from the light and head into the Devil's Tonsils, which is a tight passage with an upward curve at its end that requires careful negotiation. This pass usually ends the tour of the cave system, but the dive is not over.

The walls below Cathedral Dome have some of the most spectacular displays of jewel anemones and golden zoanthids found anywhere. They give the impression of an underwater garden in full bloom. Karen Gowlett-Holmes, a local marine biologist and international award winning photographer, has been studying and photographing these impressive walls of endemic sponges, asidians, anemones and bryzoans for many years, and she is still discovering species new to science. Even if cave exploration holds little attraction for a diver, the color and diversity of the marine life in the caves and on the walls is a naturalist's and photographer's paradise.

Two of the main diving areas in Waterfall Bay, including the caves, are listed for consideration in a marine reserve, and they have already been zoned as net free areas. This has helped the fish life in the area increase in both size and numbers over the last few years. Hopefully, they will be completely protected in a marine park in the not too distant future.

In addition to cave diving, there are also possibilities for wreck diving.

The “SS NORD” sunk in 1915 without loss of life after the officer of the watch failed to follow the captain’s orders to stay outside the Hippolyte Rocks. Charts had not been upgraded since the needle rock that lies hidden beneath the surface between the two rocks had claimed the “SS TASMAN” in 1883. The “TASMAN” was only rediscovered in 1998 lying in 72 metres of water. The “TASMAN” has only been dived successfully on four occasions as the site is exposed and subject to fierce currents and mixed gas diver certification is required. 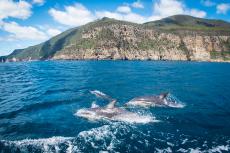 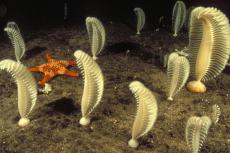