Elysia chlorotica is a green sea slug. What sets it apart from most other sea slugs is its ability to run on solar power. Shaped like a leaf itself, Elysia chlorotica can manufacture the most common form of chlorophyll, the green pigment in plants that captures energy from sunlight. Genes supporting photosynthesis have been acquired by the animal via horizontal gene transfer.

Some related slugs also engulf chloroplasts but E. chlorotica alone preserves the little green photosynthetic organelles called chloroplasts, from the algae it eats in working order for a whole slug lifetime of nearly a year. The slug readily sucks the innards out of algal filaments whenever they’re available, but in good light, multiple meals aren’t essential.

The slug feeds by sucking the cell contents from the intertidal algae Vaucheria. Most of the cell contents are simply digested by the slug. But the slug is also able to keep the chloroplasts—the photosynthesising “factories” from the algae—alive and operating and functioning within its own body by storing them in the cells that line its gut.

But that is not all. Here is the really interesting twist: Young E. chlorotica, which were fed with algae for only two weeks, have been shown to survive for the rest of their year-long lives without eating, apparently surviving on the photosynthetic production from the assimilated chloroplasts.

But how can that be possible when the isolated chloroplasts only contain enough DNA to encode about ten percent of the proteins needed to keep themselves running? The other necessary genes are found in the algae’s nuclear DNA.

“So, the question has always been, how do they continue to function in an animal cell missing all of these proteins,” says Dr Mary Rumpho of the University of Maine and an expert on E. chlorotica.  The answer she found is as simple as it is stunning.  What sets it apart from most other sea slugs is its ability to run on solar power. genes it has “stolen” from the algae it eats.

In their latest experiments, Rumpho and colleagues sequenced the chloroplast genes of Vaucheria litorea, the algae that the sea slug feed on. They succeeded in demonstrating that if the sea slug used the algal chloroplasts alone, it would not have all the genes needed to photosynthesise. They then turned their attention to the sea slug’s own DNA and discovered it contained one of the vital algal genes. Its sequence was identical to the algal version, indicating that the slug had probably acquired the gene from its food.

“We do not know how this is possible and can only postulate on it,” says Rumpho, who told New Scientist that the phenomenon of stealing is known as kleptoplasty. One possibility is that, as the algae are processed in the sea slug’s gut, the gene is taken into its cells along with the chloroplasts.

The genes are then incorporated into the sea slug’s own DNA, allowing the animal to produce the necessary proteins for the stolen chloroplasts to continue working.

Another explanation is that a virus found in the sea slug carries the DNA from the algal cells to the sea slug’s cells.

However, Rumpho says her team does not have any evidence for this yet. In another surprising twist with far-reaching implications, the researchers also found the algal gene in E. chlorotica’s sex cells, meaning the ability to maintain functional chloroplasts could be passed to the next generation. The researchers believe many more photosynthesis genes are acquired by E. chlorotica from their food, but still need to understand how the plant genes are activated inside sea-slug cells.

Elysia chlorotica, common name the eastern emerald elysia, is a small-to-medium-sized species of green sea slug, a marine opisthobranch gastropod mollusc. This sea slug superficially resembles a nudibranch, yet it does not belong to that suborder of gastropods. Instead, it is a member of the closely related suborder Sacoglossa.

The suborder Sacoglossa are known as the 'sap-sucking Opisthobranchias'. Many members of this group use chloroplasts from the algae they eat; a phenomenon known as kleptoplasty.

Elysia chlorotica is one of the "solar-powered sea slugs", utilizing solar energy via chloroplasts from its algal food. It lives in a subcellular endosymbiotic relationship with chloroplasts of the marine heterokont alga Vaucheria litorea. 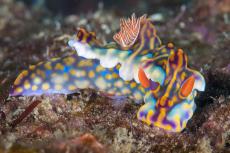 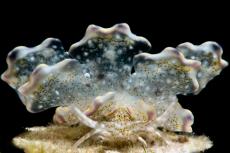 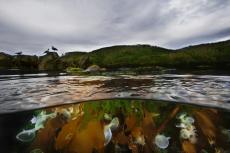 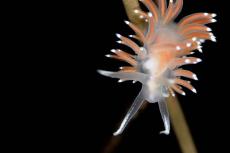