It is a simple question to which there is no simple answer, as it all depends... If you are mostly diving in Southeast Asia or the Caribbean where visibility is fantastic, during days of bright sunshine and in waters of 20m or less, you probably don’t need one. But if you plan on diving in lakes, doing night dives, penetrating wrecks or do any sort of technical dive, then a good lamp becomes an essential part of your diving gear Just imagine. You are out on a night dive somewhere nice with a group. You switch on your new 50 or 75W dive lamp floodlighting the whole reef for everyone to see, instantly making you the person of the day.

Thanks to a little help from technology and the latest developments in light bulb manufacturing, we now have an impressive output at our fingertips. It has only been a few years since the LED-technology (Light Emitting Diodes) was the laughing stock, but now it’s on the cutting edge. State-of-the-art used to mean Halogen bulbs. Later, Xenon bulbs became the buzz word, and then—as seen in cars—HID-bulbs (High-Intensity-Discharge) were all the rage.

Let’s take a closer look at the differences.

The halogen lamp is similar to the conventional non-halogen incandescent lamp in that it employs a tungsten filament in a gas-filled, light-transmitting glass-shell and produces the same type of light. It has a colour temperature of about 3600 Kelvin, which means it emits a slightly red and “warm” light. (See next page for explanation of “Colour temperature”).

The major difference is that a halogen vapour (Iodine or Bromine) is added to the inert gas inside the glass bulb, and the gas pressure and bulb temperature are much higher than in non-halogen lamps. Also, the bulb is made of fused quartz, high-silica glass or aluminosilicate “hard” glass, which is capable of withstanding the high operating pressures and temperatures.

Tungsten-halogen lamps operate in a “halogen regenerative cycle”, which maintains constant light output and colour temperature of about 3600 Kelvin throughout the life of the lamp. The halogen cycle permits the use of more compact bulbs than those of conventional tungsten-filament lamps of equal ratings, and also permits either increasing lamp life to approximately twice that of conventional tungsten filament lamps having comparable wattage and colour temperature.

The halogens were succeeded by the Xenon-lamps. These are similar to halogen-lamps, only filled with Xenon gas instead. This makes the filament burn at a higher temperature, resulting in an increase in output of about 50 percent. That’s why Xenon bulbs seem to be brighter and whiter than halogen bulbs. They, too, can be used with over voltage that increases the light efficiency as well. The downside is that the higher working temperature, and the over voltage reduces lifetime of the bulb. The nominal lifetime of a Xenon bulb is only around 100 hours. Halogen-bulbs will last up to ten times as long.

HID-technology was first widely used in cars. HID stands for high-intensity discharge, which is the technical term for the process which produces the light by striking an electrical arc across tungsten electrodes housed inside a specially designed inner fused quartz tube. This tube is filled with both a gas and metals. The gas aids in starting the lamp. When a HID-lamp is switched on, an ignition spark of about 25,000 Volt ionizes the gas, which is under high pressure. The metals produce the light once they are heated to the point of evaporation, forming plasma.

Note that a HID bulbs are, in fact, also filled with Xenon gas which may lead to some confusion.
After ignition a rather complex piece of electronic circuitry adjusts the voltage from the high ignition levels down to a process-voltage of about 60 to 90 volt. Once running, the arc produces a better and brighter light than the lamps with filaments while using less energy.

By comparison HID bulbs produce between 2,800 and 3,500 lumens using between 35 and 38 watts of electrical power, while the performance of halogen filament bulbs lies between 700 and 2,100 lumens while consuming between 40 and 72 watts at 12.8 Volt.

Another advantage of HID-lamps over halogens is their much longer lifetime of about 5000 hours. In addition, the colour temperature of HID lamps of 5500 to 6000 Kelvin closely resembles that of daylight (5700K) making it near ideal for photo- and videography. This is also why these lamps have gained such popularity with indoor gardening and made it practical, especially for plants that require a lot of light, like vegetables and flowers. They are also used to reproduce the intense tropical sunlight for indoor aquariums.

The light from HID lamps has a distinct bluish tint when compared with tungsten-filament headlamps. The bluish tint is less absorbed by water so the HID-beam has a better penetration than a comparable halogen beam.

HIDs are well suited for cave and wreck diving. But not optimal for the casual diving on reefs in daylight in depths of no more than 10-15m. As the red parts of the light spectrum are being absorbed first by the water with the blue colours being filtered last, what you mostly need at these shallower depths is boosting the red tones. Consequently you are  not looking for the neutral or even bluish colours of HID lamps for normal scuba dives at daytime.

By contrast the higher colour temperature of HID-lights photo and video purposes makes them the choice of photo- and videographers. Especially when it comes to illuminating the shady parts of the reef on day dives and to the illumination of wrecks and caverns the advantages of HID-technology really shows.

For many years LED’s were simply thought of as small and dim lights in electronic devices and signal lamps. How times have changed. There are quite a lot of technicians and scientists who now believe that the LEDs will be the lights of the future.

LEDs are characterised by a low energy consumption, extremely long life span, compact dimensions, and they are shock and vibration resistant. Another advantage of this innovative illuminant is that it has a very low failure rate and emits no ultra-violet or infrared radiation. In recent years, there have been significant developments with substantial improvements in this technology. Recently, a major breakthrough took place with the development of the Osram Ostar light emitting diode.

The technical innovation lies in a perfect interplay between various manufacturing techniques. LEDs consist of semiconductor crystals that grow on a substrate during manufacture. Up to now, the substrate remained in the diode after manufacture, where it absorbed much of the light produced.

Thanks to a new production technology this substrate can be removed and the surface of the light generating layer coated with a thin metal film. This metallised side now serves as a reflector and is placed close to the top of the LED. The result is that the LED can emit almost all of its light at the top, which causes a major increase in brightness.

The Ostar high brightness LEDs are built with a multichip-onboard-technology with four- and six-chip-versions. The LED is the first LED to exceed 1000 lumen in output—and that is just with the 15 Watt version. That means that diving lamps equipped with this chip will produce the brightness corresponding to that of a 50 Watt halogen lamp. The first prototype is already built, and the output is perfect. German lamp constructor Michael Bienhaus from mb sub is the first to introduce a diving lamp based on the new Osram Ostar LED. He has already marketed an underwater hand lamp, the “Photon”. It comes with a two stage dimming and 12.6 Volt 1.6 Ah LiMn (lithium-manganese) accumulator. This power package has a burning time of about 60 minutes followed by an additional 30 minutes of emergency lighting. All this just weighing in at a little more than half a kilogram of weight—a big step towards optimizing dive gear. As the LED module costs about 37 Euro, the complete hand lamp will be sold for 472 Euro.

Sources have also informed us that a group of German lamp nerds have already constructed a 20 Ah tank lamp with this technology. Into the small lamp head they integrated four of the new Ostar LEDs. Due to the extreme process temperatures, this lamp can only be used in water. But with a burning time of about five hours  and a whopping output of 3200 lumen—which is about 200 percent more than a strong HID burner makes—it is now possible to illuminate an entire reef at night and in bright colours. (For more information’s about this lamp project see www.tauchfunzel.de—unfortunately, only available in German).

The next revolution of underwater lamp-technology has just begun in earnest. And at least in this regard, the future looks bright indeed. ■ 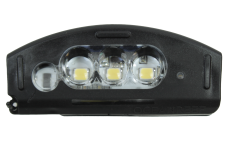 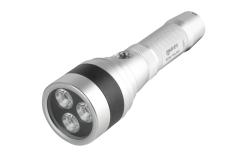 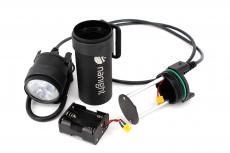 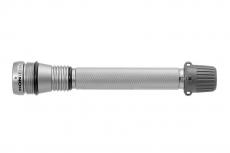