I have been an Olympus DSLR user for many years. I continued to use the Olympus E-620 after the camera was discontinued and the system was no longer supported. My travel rig consisted of two E-620 bodies, the 14-54mm f/2.8-3.5 II Zuiko and 18-180mm f/3.5-6.3 ED Zuiko lenses for topside photography. Underwater the 7-14mm f/4.0 Zuiko ED was my go to lens with the Olympus 50mm f/2.0 Macro ED Zuiko lens for small subjects. I used the Olympus PT-E06 underwater housing with Olympus ports. This system is much smaller than most DSLR rigs but it still filled the bags and took me to the weight limit when traveling.

Using just the LCD and in some cases, an electronic viewfinder, smaller camera bodies could be designed. The lenses have a shorter flange focal distance, so the lenses are much smaller. Many other lenses could be used on these camera bodies if a lens adapter exists. But at this time, very few underwater housings are compatible with these lenses and adapters. Because of the small size of the camera and lenses, housing companies can produce smaller housings and ports. This is a benefit to the traveling underwater photographer. Because of the small size and the availability of lenses, I decided to embrace this system.

For topside I use the M. Zuiko Digital ED 12-40mm f/2.8 PRO and the M.Zuiko Digital ED 40-150mm f/4.0-5.6 R lens. Underwater, the Panasonic Lumix G Fisheye 8mm/F3.5 has become my main lens, and I use the M.ZUIKO DIGITAL ED 60mm f/2.8 Macro for small subjects. These lenses perform equally well on land. All of these lenses and two bodies fit in a small camera bag.

I used Aquatica housings back in the days of film. I was very happy to see the Canadian company is now supporting small mirrorless cameras. I was able to purchase one of the first Aquatica AE-M1 housings for the Olympus OM-D E-M1. This anodized aluminum and stainless steel housing is only 9 x 6.25 x 4.5”, and weights 2.1kg/ 4.75pounds, but is built like a tank.

Underwater photographer Alex Mustard explains how to customize the OM-D E M5 for underwater use in the Nauticam housing in this WetPixel article: http://wetpixel.com/articles/using-the-olympus-om-d-e-m5-underwater/ (If you read this with the camera in your hand, it makes perfect sense.) The recommendations are excellent and work with the OM-D E-M1 in the Aquatica housing. One of the best recommendations is how to change the video button to a focus lock button.

Focus lock by holding the shutter button down half way is a technique used by many photographers. But it is not easy to feel the halfway point when the camera is in a housing. On both the OM-D E-M1 and 5, you could customize the controls so the video button locks in focus. This way you hit the lever that is usually used for video to lock in the focus, rather than just pushing the shutter release to capture the image.

When I first got the housing I used the 4-inch fisheye dome for the 8mm lens and the 0-60 flat port for the 60mm macro. The 4-inch dome is made with BK-7 glass and the macro port is made of optical grade acrylic. I also have manual focus rings on both lenses. Later I added the Olympus M.Zuiko Digital ED 9-18mm f/4.0-5.6. In the 30205 SW8 optical grade acrylic dome with 30602 extension ring this lens performs better than the Panasonic 7-14mm. Corners are sharper and in general the lens is sharp and produces images with good contrast. The lens is wide enough to get close to subjects but by zooming to 18mm is good for subjects a little farther away and close-up wide-angle. Since the Olympus M. Zuiko Digital ED 12-40mm f/2.8 PRO uses the same dome and extension, I purchased the zoom ring. This lens is very good for small to medium size subjects that are too large for the 60mm macro lens.

I continue to use dual Olympus UFL-2 strobes. These strobes have been discontinued. But I find being able to control the strobe power from the camera to be a useful. The strobes are mounted on TLC ball joint arms consisting of two 8-inch sections. The OM-S E-M1 does not have a built-in flash, but the small FL-LM2 hot shoe mounted flash is included with the camera. The Aquatica housing is designed so you could attach the flash and use it to fire external strobes with fiber optic cables. You do have to set the camera so the flash will fire in the down position.

The Aquatica housing features the SURVEYOR moisture and vacuum sensor alarm. This system includes the Surveyor moisture and vacuum sensor circuit, a pressure valve and vacuum pump. The SURVEYOR circuitry integrates a water detection function that remains on when a battery is inserted. Should the slightest amount of water make contact with the sensor probes, it will trigger an alarm using both an audible signal and a rapidly flashing red LED light.

To fully test the sealing integrity of the housing, you use the optional vacuum pump and pressure valve to create a vacuum. All you have to do is push the on button and attach the pump to the valve. After pumping out all the air a green LED light blinks every 5 seconds. This way you know the SURVEYOR system is monitoring the housing and that it is safe to enter the water. If the vacuum is lost, the alarm warns you with both an audible signal and a rapidly flashing red LED light. Creating the vacuum also seals the housing so it is impossible to open the housing by accident. This definitely gives you a warm and fuzzy feeling.

My dive buddy Olga Torrey shoots with the Olympus OM-D E-M5 in a Nauticam housing. She has the Olympus 12-50mm f/3.5-6.3 ED M.Zuiko EZ and the Panasonic Lumix G Vario 7-14mm f/4.0 ASPH. Lenses. Having the same system we could share lenses but not ports.

The Olympus 12-50mm lens has a macro button. Nauticam designed an interesting gear for this lens. In the port the gear not only allows zooming but you could access the macro button. This way you could capture tiny and medium size subjects on the same dive.

Olga captures both stills and video with her camera. She has a video light and Sea & Sea YS-02 strobes mounted on each side of her housing. The YS-02 is a powerful small strobe with a wide beam angle and fast recycling time. The strobe power has to be controlled manually. Since it has a continuous power dial this is easy. The Beneath the Surface 1/2-inch Double-Ended Ball Flex Arms easily support the weight of both lights. By using the Beneath the Surface Arm Triple Clamp the strobes could be mounted right next to the video light.

After assembling all the camera gear, it is time to jump on a plane and do some traveling! 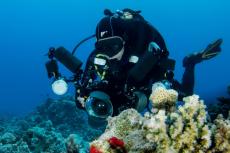 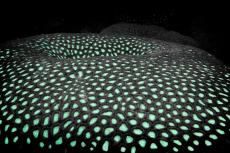