Exposure protection is second only to the dive mask in its importance to your dive experience. In my article in issue #92, we looked at wetsuits, their myths and design features. In this follow-up, we will discuss the next level corollary—drysuits. Mike Ange has worked in the dive industry for 29 years, 12 of those years in the senior management of exposure protection companies, including Huish, Waterproof, Harveys and Whites.

His suit design modifications have won awards, and he designed the first commercially viable thermal testing process for wetsuits in conjunction with Simon Fraser University in Vancouver, Canada, in 2018.

He has authored several books and manuals, including Diver Down: Real-World SCUBA Accidents and How to Avoid Them, published by McGraw Hill; Altitude Diving Manual, published by SSI; TDI Advanced Wreck Diving Manual; and the SDI/TDI Diving Leadership Manual.

Literally for generations, neoprene rubber has been the chosen material for building most forms of exposure protection for divers and other water sports enthusiasts. It has consistently been the primary, if not the only, material for wetsuits since physicist Hugh Bradner at the University of California at Berkley invented the material in 1952.

Many divers are surprised to learn that prior to the 1990s, virtually all drysuits were also made almost exclusively from neoprene rubber, and for good reason. Neoprene is form-fitting, has manageable buoyancy characteristics and provides a watertight or even an airtight environment when properly configured. Most importantly, neoprene provides excellent thermal protection in the most extreme environments.

In the late 1980s and early 1990s, largely as a result of the efforts of Dick Long and his team at Diving Unlimited International (DUI), there was a trend towards membrane suits that were made from a material with a very fragile (typically butyl) membrane laminated between two protective layers of a material like nylon or polyester to make it useable. These suits gained popularity because the neoprene suits of the era were very heavy and bulky to wear, and many people thought they required excessive weight to control buoyancy, although this was mostly a training issue. The new lightweight materials produced a suit that simply kept the diver dry, and if they were cut large enough, provided more freedom of movement.

Called “bag suits” by many divers of the day, the new technology produced many benefits. The membrane suits were lighter in weight, easier to travel with due to their reduced bulk, and, in comparison to the neoprene drysuits of the era, much more comfortable to wear, especially on the surface.

The neoprene drysuits were typically made of sturdy foam in 5mm or 7mm thicknesses, which provided excellent thermal protection but at the expense of added dry weight; they increased buoyancy, especially in shallow water, as well as bulk, which effectively reduced diver flexibility. These attributes made these suits a challenge to wear, effectively restricting the use of these suits to only the hardiest of recreational divers with a true need, and the commercial diving and public safety segments of the industry.

Pros and cons of membrane suits

The membrane suits solved many of these issues—literally, opening the door to dry diving for even the most pedestrian recreational diver with a need. However, there were significant trade-offs.

First, membrane suits offer virtually no slowing of thermal loss and rely instead on heavy undergarments and large volumes of trapped air to insulate the diver. As a result, nearly all divers are forced to add significant amounts of weight to submerge in a bag suit.

For example, I use a stainless backplate and twin LP 72 low pressure 13.5-liter cylinders, filled to 151 bar, for many dives in neoprene drysuits (Waterproof Antarctic suit, or my preferred O-Three R 2/100 suit) with a thin base layer and no added weight. This system is between 6.5 and 8lbs negative, depending on whether it is used in salt or fresh water.

Switching the exact same configuration to a BARE X-Mission nylon trilaminate, with a medium weight thermal layer over the base layer to compensate for the loss of the thermal protection in the neoprene, requires approximately 20lbs (9kg) of total weight. The added buoyancy is the result of the trapped air, which is required to keep the “loft” in the undergarments so that they can provide insulation.

Incidentally, all this trapped air also creates the safety issues we train for in a drysuit diving course. The air can shift to the legs for example, causing the diver to invert and render him or her unable to vent air from the suit. This can and does create a worse-case safety issue for the diver and inverted (feet first) uncontrolled ascent to the surface. The smaller air volumes of neoprene suits tend to minimize this issue and will also make the transition to diving dry much simpler for the novice.

The other big trade-off for bag suits is the lack of stretch. While the materials are much more “flexible” than old-school neoprene, they have virtually no stretch at all. So, the diver’s movements are quite literally restricted to the cut of the material, and in order to allow the diver to simply achieve a normal swimming attitude, with arms forward, a significant amount of loose material must be added to the suit. This added material traps additional air, and when it is not fully extended—which is most of the time—this cut produces folds and large wrinkles in the material. Those folds and wrinkles create a lot of drag when pushing the suit through the water, decreasing gas consumption and increasing diver fatigue.

Many manufacturers have touted “bias cut” to imply increased stretch in the suit. While this works with stretchy materials used in surface products, it is a bit of a fallacy for the laminated and rigid materials used in membrane suits. It does improve stretch by 1 or 2% typically, but when you need 2.54cm (1in) of stretch and you only get 1mm, the 2% increase is not that effective. In short, bias cut bag suits suffer from the same marketing malady as omni red wetsuits and ground unicorn horn.

The final trade-off is that membranes are very hard to maintain and even harder to repair. In the interest of full disclosure, after 30 years as a technical and cave diver and 20 years selling, designing and producing drysuits for some fairly major companies, I am rather biased against the bag suit. The reason for this bias is that they are hard to maintain, and they are also quite hard to build, as the quality rates from a number of manufacturers demonstrates.

The membrane is sandwiched between very porous materials (not even waterproof in many cases); hence, it is very difficult to exclude water from traveling under a patch where it will seek out any flaw in the membrane. As a result, a flawed suit will leak or even flood. The internal membranes are extremely fragile, and over time, will break down, developing pinholes and leaks especially where the suit repetitively bends during activities like swimming.

Some materials used in membrane suits, like nylon, cannot be chemically bonded or glued in the field at all. This makes seemingly solid repairs fail quickly, but the reality is that it was never actually repaired at all, the hole was just temporarily plugged. All of this further complicates the fragile nature of the suit so that an active diver, or even a moderately active diver, can only expect to get about five or six years from a typical bag suit.

The good news is that the evolution of modern neoprene materials—that same evolution that has been beneficial to manufacturers of wetsuits but detrimental to divers—has had the opposite effect for drysuits. Thinner, more durable and more flexible materials with more stretch, work in a drysuit because the suit is always dry. In a wetsuit, as the neoprene thins with compression, it will invariably allow the suit to flush water, effectively chilling the diver, but a drysuit does not have that issue. So, the technology has come full circle, as technology so frequently does.

Modern neoprene drysuits are made from materials as thin as 2.5mm and as thick as 6mm. Some of the more rugged materials deliver abrasion resistance that is 80 times higher than older neoprene products and most membrane products. They are lighter and much more flexible than the neoprene suits of the 20th century, and because they all have both substantial stretch and inherent insulating capability, they can be cut to be more or less form-fitting.

This cut reduces drag through the water and reduces diver fatigue as well as gas consumption. Gas is saved not only from lower respiratory demand but also by the lower internal volume required to keep the diver warm. The lower internal volume also reduces the risk of gas trapping and loss of trim due to large volume gas shifts, which are always a hazard in membrane suits.

Another advantage of neoprene is the ease of repair. There are several very effective, over-the-counter glues that can be used to close tears and seal punctures of varying sizes—even pinholes—quite easily. For small flaws, you do not even have to wait for the suit to dry. Carry a tube of aqua seal and a syringe (or a similar device for pushing glue into pinholes), and you can deal with virtually any failure except a seal or zipper failure. This gives neoprene a huge leg-up if you are going on expensive dive trips that would be ruined by a suit failure or dives that are mission-required for any reason.

The primary advantage of neoprene drysuits is without a doubt their thermal properties. As noted in my previous wetsuit article, actual lab testing shows that neoprene is the best insulating material of all those tested. With drysuits, you do not have to worry about the type of lining, because the suit is already sealed to stop water flushing. This means that the best protective materials can be used to cover and protect the rubber, and unlike wetsuits, there is no trade-off in thermal protection. In fact, the right materials may actually add to the suit’s capacity to slow thermal loss.

On the climate control front, condensation is another major factor in comfort and once again neoprene suits are superior. Membrane suit wearers are forced to use wicking materials in expensive undergarments because of the immediate condensation that occurs in their suits when they submerge. Add a hot, humid day and the condensation can be quite significant when you drop into even moderately cool water. Because of the thermal properties of neoprene, this condensation effect is greatly reduced.

Finally, if your drysuit does leak during the dive, you are much better off with neoprene materials. Basically, a partially-flooded neoprene drysuit becomes a really high-speed wetsuit, while a bag suit just becomes frigid.

Some divers may prefer a membrane suit for certain dives, especially divers who are diving in the temperate and tropical zones where the suit’s integrity is not essential to being able to dive. For divers diving in more demanding environments or those who just demand consistent performance, there are many reasons to select a modern neoprene drysuit, especially when looking at the price tag.

A top-end neoprene suit will typically cost a lot less than a top-end membrane suit—by a thousand dollars or more. It is extremely rare in diving that the better-performing product is available at a lower cost. Even low-end neoprene drysuits deliver superior protection for not much more than a semi-dry or top-end 7mm wetsuit. For the drysuit novice, they are by far the easiest suit to use for the transition to drysuit diving. ■ 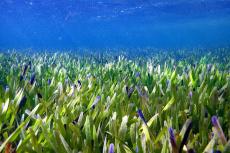 Save the corals of Maamigili 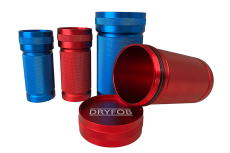 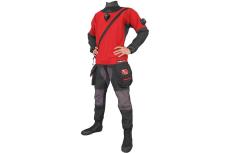 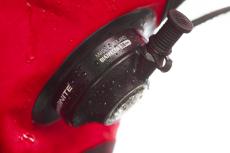 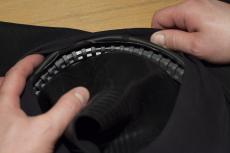 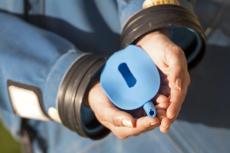