As another Celebrate the Sea festival wraps up, it is clear that with each year that passes, the show grows stronger and stronger. Staged at Singapore’s Suntec City convention centre from June 3 -5, this year’s festival was truly unforgettable. The highlight of the event was an unprecedented evening in Asia-Pacific on which three super-stars of the underwater world celebrated our oceans. Dr Sylvia Earle jump-started the evening with an inspiring talk on the sustainable use of our seas. She addressed pertinent questions like how can one person make a difference and surely there was not a dry eye in the house as she portrayed the bleak realities of shark finning.

More of a comedian than a maker of deep-sea diving equipment, Dr Phil Nuytten then led us down with him through his journey in the depths of the ocean. To close off the evening, David Doubilet, the light magician, mesmerized us beneath the miracle waters of Africa with images captured during his trip to Botswana.

The festival itself was free to the public, with bustling crowds of avid divers, nature lovers, photographers and shoppers streaming through the exhibitions. There was everything from eco-tour operators to dive resorts, photographic and outdoor equipment, shoes, watches, underwater housings and was even a tank in which one could experience the thrill of scuba diving for the first time.

But as always the focus of the festival is to praise the image makers that continue to capture the many faces of our ocean’s beauty in the hope of preserving it. The entries into this year’s imagery competitions were astounding; hundreds of adults and children explored the prints in our public galleries while the slide shows and film festival kept viewers enthralled for three days straight. Each year Celebrate the Sea offers a unique opportunity for divers, photographers and nature lovers to come face to face with the who’s who of underwater imagery.

In seminars and workshops, diving and photography experts like Neville Coleman, Michael Aw, Jason Heller, Robert O’Toole, John Cosgrove and Tay Kay Chin entertained and interacted with their audience. From a raunchy discussion about sex in the sea to internet marketing, capturing the essence of sea birds in one image, the latest photography techniques, night romps through Amazonian jungles and how to explore the ocean in an underwater sports car these seminars are crucial in cultivating our knowledge of the ocean.

The show was again used as a platform for OceanNEnvironment’s Say No to Shark Fin Soup campaign. Our posters, video and life-size shark in the foyer all highlighted the plight of the shark as it is slaughtered in the name of culture and nutrition-less soup that gets its flavour from chicken stock. With a Chinese restaurant right next to the festival that served shark fin soup, like the festival that served shark fin soup, like most in Singapore, the matter could not be more poignant.

“There is a tremendous amount of enthusiasm and really genuine interest in what is going on, specifically with the business of shark fin soup…Singapore can be seen a model of stewardship for looking after the environment,” says Dr Phil Nuytten, inventor of the ‘Newtsuit’. A truly international affair, Celebrate the Sea has established itself as the biggest and most exciting festival of its kind in Asia Pacific and will continue to grow in upcoming years.

OceanNEnvironment would like to thank all our sponsors, those who attended, those who competed, those who volunteered and most importantly those who came from around the globe to celebrate the ocean with us. And as for the rest of you, see you next year at the unforgettable festival.

As the focus of the Celebrate the Sea festival, this year’s imagery and film competition entries were of outstanding quality. With the overwhelming number of entries in the many competitions judged at the festival, praise was given these artists who have endeavoured to capture the ever-changing beauty of the ocean in the hope of preserving it.

The finalists from all the photography competitions were displayed in special public galleries through which hundreds of adults and children explored some mesmerizing images and creative takes on the natural world. Meanwhile, the slide shows and film festival kept viewers enthralled for three days straight. With up to $50 000 in prizes awarded to this year’s winners, the judging was no easy task.

Dr Sylvia Earle helped with the judging of the children’s painting competition. The Artist of the Sea 2005 was a little girl named Lakshmishree from Bangalore India. Her whole village saved up enough money so that she could attend.

David Doubilet led the judging of the slides, revealing his admiration for photographers who are able to capture ‘special moments’ as he calls them. As for the films in competition, Dr Phil Nuytten said, “The entries were very good and it was a tough job, but the top-notch ones stand out. The winner was crisp, sharp and spectacular.”

Thank you to our sponsors and congratulations to those who won and for those who missed out on a prize, better luck next year! ■ 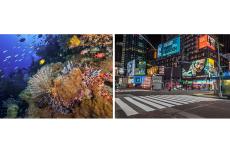