Nowadays, sharks are big business and many divers and scientists have made a name for themselves by making new discoveries about shark behaviour and biology. There is however one man who for many shark enthusiasts needs no introduction. A true pioneer, Andre Hartman is the original shark wrangler who, in an age of misunderstanding, has pushed the boundaries of shark diving to learn more about a species that has been misunderstood for too long.

He has made discoveries that have questioned our understanding and has made many of the most memorable shark photographs and documentaries possible by bringing the world’s top underwater photographers and cinematographers face to face with Carhcarodon carcharias, the Great White Shark.

Andre Hartman, with his thick bushy beard, his coarse South African accent and his towering physique, looks like a true sailor. He has enjoyed a long and illustrious relationship with the ocean working in the navy as a commercial salvage diver and as a Springbok champion spear fisherman. Andre is a hero in his hometown of Gansbaai. His discoveries have earned him a reputation as one of the most respected sharks behaviourists in the world.

However, his knowledge does not stem from specimens studied in a lab or facts and figures in scientific journals. It comes from spending time in the water, with no cage for protection, with one of the ocean’s top predators.

Andre was born in Bellville, Cape Town, in 1953. His relationship with White Sharks started in 1977 when he first encountered them in open water.

“It tried to bite me! I was spear fishing at the time and carrying a lot of fish. It came in and tried to take me. I saw it coming, so I gave it the gun. It didn’t like it, so it swam away”

Many South African spear-fishermen encounter large sharks, including Great Whites. The animals are attracted by blood and the distress of speared fish.

The diver must use his spear gun to fend off the shark. Some spear-fishermen choose to carry a power-head, or bang-stick, for extra protection, which is used in extreme circumstances.

“I was petrified of the things. I was spear fishing for South Africa at this time, but before I got my Springbok colours. We used to run into these animals all the time. We needed to learn more about them, which places to avoid, how to push them off with a spear gun or how to use a power-head to scare them away. I never shot a shark with a power-head myself though.” 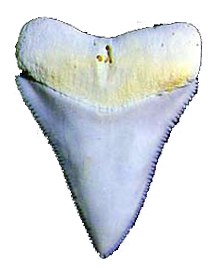 Andre also worked as a commercial salvage diver on numerous wrecks around the Cape, playing a major role in exploring, mapping and salvaging historic shipwrecks such as the British steamer ‘Joanna’ and the HMS Birkenhead, famed for the tragic loss of 445 men some of which were taken by white sharks. The accident also gave birth to the phrase ‘women and children first’, which after the sinking, became naval protocol throughout the world.   “

I have a very good memory underwater. When I see things like a school of fish in a hole, even 10 years later I can go back and find it. So, when I see something like a wreck, I first swim above it, review its outline from above, and then I can go and map it out. With every dive, you add more detail to the map. That was basically my job. It was frightening diving on those wrecks, knowing that there were such large white sharks around and knowing so little about them.”

Andre continued to encounter white sharks underwater throughout his commercial diving career, often encountering sharks on long decompression stops in mid water, however it was through diving and spear-fishing around Dyer Island that Andre grew to better understand and appreciate the White Sharks.

“I first came to Dyer Island in 1986. I saw the White sharks here when I was spear fishing. I again had to fend them off. I was taking the fish to the boat. There was blood in the water, and a shark investigated me assertively. But I thought: How nice they are here! “

It was in 1996 that Andre realised the commercial potential of Dyer Island where large numbers of Great Whites frequent the waters year round; it’s one of the few places in the world where divers can observe white sharks hunt, interact and breach.

I decided to start up a business here because I had seen how many tourists were attracted to the sharks at Aliwal Shoal near Durban. So, my friend, Jean Pierre Botha, and I went into business.”

Their company, Marine Dynamics, grew in popularity very quickly and earned a reputation for being the premier boat charter for diving the island. Many seasoned professional photographers and cinematographers, including crews from the BBC, National Geographic and The Discovery Channel to name just a few, travelled to dive with Andre using his unique knowledge and experience to get shots that had never been seen before.

As well as working as guide to the world’s top underwater image makers, Andre is himself an accomplished cameraman shooting with Sony VX1000 and VX2000 cameras. He also produces and markets his own independent productions.

The more time Andre spent around the sharks, the better he understood them. It was during the early years he spent working around the island that he discovered what many consider to be one of the most amazing spectacles in the natural world.

Often, whilst diving with Great Whites, the animal would attempt to bite the out-board motors of the boat. Sharks often ‘investigate’ metal objects in the water, attracted by the electronic impulse emitted by the metal. Concerned about the shark damaging his motors, as well as harming itself, Andre reached into the water from the back deck of the boat one day to push the shark away by the snout.

To his amazement, it lunged out of the water with its huge jaws agape, and then swooned backwards into the water. The sharks seemed to be in a form of trance, but Andre believed that when the shark’s snout was touched, it experienced sensory overload.

The Ampullae of Lorenzini, electro-receptors in the snout, are so sensitive that there is a rush of information putting the animal into temporary sensory overload. The shark is almost overwhelmed by the experience, and only comes back to its normal state after a few moments when the overload has passed.

Andre continues this exercise today. One must see to believe it.

Today, Andre continues to guide divers around the island running trips for shark enthusiasts and seasoned professionals alike. Many people decide to go, meet and dive with Andre after seeing him in one of the many documentaries in which he has starred alongside various top wildlife presenters and scientists.

After meeting Andre, and diving with him, I learned more about sharks than I ever thought I could. As much as they amazed me, I couldn’t help but be equally intrigued by Andre’s reaction to the animals. I revelled in anticipation as the shark’s fin broke the water, excitement as it lunged for the bait and wonder as it effortlessly slid back into the deep. After all these years of working with sharks, Andre is still in awe of them.

Andre is a man who has lived alongside the white sharks all his life. He is a  character who will go down in history as the man who introduced the world to the true character of the Great White Shark, a man who continues to try and learn more about the most misunderstood fish in the sea.

To me, the man is a true diving legend. When I think of Great White Sharks, I can’t help but think of Andre Hartman.

Disclaimer: “Don’t try diving with Great White sharks without a cage on your own. These great animals are top predators in their own environment and could kill you in an instant.