In 2017, a Canadian underwater photographer - Shane Gross - had completed a dive off Eleuthera when his girlfriend Anita surfaced, visibly distressed. Anita had been leading a dive in the Bahamas at a site called the 'Sea Garden', when she discovered the carcass of a green sea turtle with a hook protruding from its decomposing tongue.

Images like this can become warnings for the future. Shane Gross

The animal had obviously been trapped in situ for a significant period of time, and had drowned.

Shane grabbed his camera and dived the site. He found the eyeless, emaciated remains entangled in fishing line. After shooting a number of images to help raise environmental awareness, the photographer removed the hook and line so that it did not snare and kill any more marine life, before burying the turtle in the sand.

...the Conservation category - the winning images produce powerful emotion, and will influence a new generation of ocean conservation...

Underwater Photography Guide publisher, Scott Gietler stated, “The quality of images submitted this year was exceptional - making judging very difficult and demonstrating that the winning images are some of the best in the world.

I continue to be amazed by the wonderful images that today's underwater photographers are producing. The two new categories, Conservation and Blackwater, were true standout categories. Especially the Conservation category - the winning images produce powerful emotion, and will influence a new generation of ocean conservation.”

This is not the first time that Shane has had success in a photography competition. His most recent win was in July 2019 when he won Gold in the 'Dive Photo Guide SharkCon' photo competition in the 'Shark Behaviour' category.

The Sardine Run and a car loan

As a young child, Shane enjoyed snorkelling and would play with a 'point and shoot' disposable film camera. Then, in 2000, the 35-year-old PADI Master SCUBA Diver Trainer took up the sport, but this was not unexpected because he had been born into a family that scuba dives. But it was a Doug Perrine image that set Shane on a photographic crusade.

Gross told 'In Focus' that "I loved bringing along disposable film cameras (all I could afford as a backpacker) when one day I was flipping through a magazine and came across Doug Perrine’s amazing Wildlife Photographer of the Year image from the Sardine Run. In that moment I decided I would do whatever it takes to be able to make an image like that someday." He therefore applied for a car loan (2009), and instead spent the money on camera equipment.

"I worked hard to pay off the loan and then I had to save to go on trips to be able to use it. I could see that this was too slow, I couldn’t practice enough. So, I became a dive instructor and got a job in The Bahamas. That allowed me to practice almost constantly and hone both my diving and underwater photography skills.

My obsession grew as I saw more and more important stories that needing to be told. I try to focus on local conservation issues, both the positive and negative ones. I work with scientists and conservation organisations to help give them the visual tools they need to tell their story and the story of the animals and environments they are working to help." 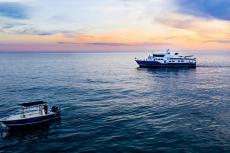 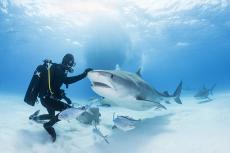 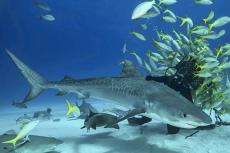 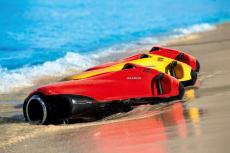