While the number of camera manufacturers with horses in the mirrorless race has now reached critical mass with the recent entrance of Canon and its EOS-M, and the earlier entrance of Nikon with the J1 and V1 cameras, the number of models available has grown even more. However, for underwater photography the choices narrow somewhat and the early entrants in the mirrorless race, Olympus, Panasonic and Sony, are very much in the lead. Don Silcock is an underwater photographer and dive writer based in Sydney, Australia.

Mid-range zooms, often the type offered as a kit-lens, will usually fit the bill for the general purpose category and most of the manufacturers have something credible to offer. However, for wide-angle and macro, the choices are more limited and because Olympus, Panasonic and Sony have been in the mirrorless race the longest, they have much better selections of lenses available than the late entrants do.

The Olympus and Panasonic Micro Four Thirds technology has a distinct advantage, because the lenses from one manufacturer are compatible with the other manufacturer’s cameras, meaning a much larger overall selection of lenses to choose from. Whereas Sony uses its own format and therefore has less lenses available.

The current camera of choice in the Olympus/Panasonic stable is very much the Olympus OM-D E-M5, which has created a wave of interest generally, and in many ways signifies the coming of age of the Micro Four Thirds standard.

Modeled on the very popular Olympus OM film cameras of the 1970’s and 1980’s, the OM-D was initially so popular that there was a long waiting list to get one. But even now that the initial glow has faded, it is clear that the OM-D is an excellent camera with a nice choice of lenses as described below.

On the Panasonic side of that stable are the GH and GF range of mirrorless cameras plus the GX-1, all of which are very competent but have not really excited underwater photographers like the OM-D has!

Over with Sony the choices are around the popular NEX 5 and NEX 7 cameras, both of which excel technically because of their large APS-C sensors.

The choice of lenses currently available for the Micro Four Thirds standard Olympus and Panasonic cameras is quite impressive across both wide-angle and macro, with some nice options for mid-range zooms also.

Panasonic offers the 8mm (16mm equivalent) fish-eye lens that has a bright f3.5 maximum aperture and has a close-focus distance of just 4”.

Fish-eyes are a very important lens for underwater photography and some of the best wide-angle images ever taken are done with these extreme perspective lenses.

The development of such a flagship lens by Panasonic back in 2009 signaled how serious their commitment to the Micro Four Thirds standard was, and the lens performs very well above water.

However extreme rectilinear lenses – lenses that create straight lines in the corners, rather than bent ones like fish-eyes do - are notoriously difficult to get good results with underwater, because of issues related to the curvature of dome ports.

So just how useful the 7-14mm is underwater is not clear but it does appear that it suffers from softness in the corners just like the Nikon 14-24 does underwater.

Olympus offers a very nice alternative to the 7-14mm for underwater use with their 9-18mm (18-36mm equivalent) zoom lens, which is both small and compact and has a close-focus distance of just 6”.

Wide-angle zoom lenses in this range are much easier to get good results out of underwater and the Olympus 9-18mm looks to be a much better choice than the Panasonic 7-14mm for the underwater photographer.

At the macro end of town there are two very nice lenses available for the Micro Four Thirds standard - the Panasonic-Leica 45mm (90mm equivalent) and the Olympus 60mm (120mm equivalent).

Both lenses offer true macro capability with 1:1 reproduction ratios, bright f2.8 maximum apertures, high quality glass and excellent close-focus distances of 6” for the 45mm and 7.4” for the 60mm.

Finally in the mid-range zooms, Olympus has an interesting offering with the 12-50mm zoom which is offered as a kit lens with the OM-D. The lens has a very good range, but like most kit lenses is not a stellar performer optically above water.

But beneath the waves some of those issues don’t matter too much and combined with its macro capability at a fixed focal length of 43mm when engaged, means that it is an interesting prospect for underwater photographers.

However, to utilize that macro capability requires a rather expensive port as will be explained in the next article, therefore the 14-42mm kit zooms from both Panasonic and Olympus may be better choices for that general purpose “hunting” lens!

The Sony NEX cameras do not have the array of lens choices that the Panasonic and Olympus range do, but there are still a lot of very good underwater photographs being taken with these cameras as subsequent articles in this series will show. Currently the two most popular Sony lenses for underwater photography are the 16mm “pancake” style SEL16F28 wide-angle, which is equivalent to 24mm on the NEX cameras. The difference in crop factor – 1.5x with the Sony NEX cameras, and 2x with the Olympus and Panasonic – is because the Sony uses a larger APS-C sensor. The 16mm has a good close-focus distance of 9.4” and most importantly it can be used with Sony’s well-regarded and relatively low-cost VCL conversion lenses that screw on to the front of the 16mm lens.

“Build it and they will come” is the adage the tourist industry often uses when developing a new resort at a key location, and a similar thing applies with underwater housings, with the most likely candidates tempting some of the manufacturers in to committing precious resources to design housings for the leading mirrorless cameras. However the rapid development of new mirrorless cameras is clearly creating problems for the manufacturers and some are having second thoughts. Ikelite for example, normally one of the quickest to market, has announced that it will not be producing housings for the OM-D, the Panasonic GF series of the Sony NEX’s.

On the other hand, Nauticam has produced several housings for mirrorless cameras and continues to do so at a quite amazing pace. Selecting a housing and navigating through the complicated port choices available will be covered in the next article.

Mirrorless technology is really carving out a very credible space in underwater photography and the camera manufacturers continue to push the capability envelope. The current leaders are the Olympus OM-D and the Sony NEX units which are very capable cameras. The camera manufacturers know they need to fill the gaps in the lens range and will do so over time, plus the entrance of third party lens manufacturers like Sigma is another very positive sign that the mirrorless technology has reached critical mass.

The advent of this new space in underwater photography creates a very cost-effective way to upgrade from point and shoot cameras or downsize from much larger and heavier DSLR’s. But like any emerging technology there are “gotchas” to trip you up and we hope this series of articles will guide you through the maze – stay tuned! 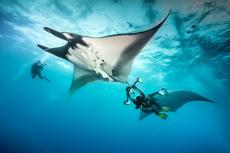