The Art of Wolfgang Leander

At the almost venerable age of 73, Wolfgang Leander is one of the great pioneers of freediving with sharks, whose writing and photography have made him a legend. Of German descent and now living in Cochabamba, Bolivia, Leander was fascinated from early childhood by the sea and its occupants. By the time he was a teenager, he was spending his time spearfishing in the Mediterranean, which was then a diver’s paradise. Inspired by the feeling of flying weightlessly through the spectacular submarine landscapes, he honed his skills while exploring and fishing.

Freediving gave him the sensation of being at one with nature, and he resisted scuba diving, and finally refused it, because he thought he would lose that sensation of freedom of motion under the weight of the gear and tank.

The first time Leander saw a shark close-up, he was spearfishing alone in 1968 in the British Virgin Islands, and just as he targeted a fish, a four-metre shark glided by him. He was riveted by the sight of it, and replayed the moment over again and again, trying to keep the enchantment alive. He found the experience so moving that he began to seek sharks out, and tried not only to see them, but to interact with them.

Caribbean reef sharks were his favourites. He found them to be the most elegantly designed of sharks, and they accompanied him on his lone spearfishing sojourns. He saw them in many situations, and became increasingly familiar with them and the other sharks on the reef. He had always had an intuitive sensitivity to animals, and knowing their body language, he learned to move with them in harmony with their moods. He soon perceived that they were intelligent animals, and was awed by their capacities to win out in countless situations that developed in their complex environment.

Leander was one of the rare individuals who discovered on his own, independently of the rest of human kind, that sharks were nothing like what he had been taught, that they do not behave the way people believe they do, as shark mythology tells us that they do. Once he knew this, he became an avid shark advocate and a leader in the effort to save these maligned fish from extinction.

Photographing them regularly, he tried to capture their essence in black and white, and followed his own instincts as he had always done, to remain faithful to his old Nikonos V camera long after the world went digital.

He is one of the very few underwater photographers who works with available light only, and he does not use distorting ultra-wide-angle lenses to create special effects. His camera becomes an extension of his eye, literally focussed on his subjects, as he works.

Leander sees himself as a purist when it comes to diving and photography, and his uncanny sense of harmony may be behind his skill in capturing striking images that reflect the supernatural beauty he found in the ocean. He says that he has most images in his head before squeezing the shutter.

With their delicate shadows illuminated by the white sand, Leander's lighted images enhance the clean and graceful silhouettes of sharks in motion. The black and white medium emphasizes the play of light over the streamlined forms of his subjects while his sharp eye captures dramatic compositions that highlight their elegance. His works present the most fragile-looking harmonies of form.

The presence of the tiger

In March, 2007, Leander dove with tiger sharks at Tiger Beach in the Bahamas, and found the underwater presence of these great sharks spellbinding. Their curious and very slow approaches to gaze at him were unexpected and irresistible. He writes, “I looked into their dark eyes, and I immediately felt what the French call 'le coup de foudre,' love at first sight.”

Leander returned again and again to swim and interact with tiger sharks, each time marvelling anew at the intelligence he found reflected in their eyes.

At the same time, he has been a passionate, and at times vociferous, spokesperson for sharks, assuring others that humans are not on their menu, and that they are intelligent and peaceful animals who treat humans gently. He regularly denounces their demonization by the media, their slaughter for shark fin soup, and the shark trophy fishing culture that dominates public thinking in many regions.

He urges all those who fish for sharks, and those who fear or hate them, to go and meet them underwater, because he is convinced that anyone who sees them in their habitat and makes eye contact with the living shark, will recognize that it is not the monster it is portrayed to be.

To Leander, no one can meet a tiger shark and fail to be enchanted by his or her beauty, peacefulness and intelligence, sensed, rather than seen, in the “dark and inquisitive” eyes of the tiger. ■

For more information about how Leander crafts his images to transmit powerful visual messages visit: fleander.blogspot.com 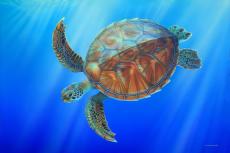 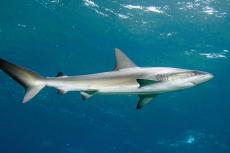