Of seals and their whiskers

A study on three pinniped species revealed that their whiskers served an active sensory function. Some land animals like rats and shrews use their whiskers to explore, forage and move around. For the first time, a team of researchers, led by Robyn Grant of Manchester Metropolitan University, were able to show that pinnipeds too use their whiskers in a similar fashion.

The study, published in the Journal of Comparative Physiology A sought to measure and compare whisker movements and control amongst three pinniped species—California sea lions, harbor seals and Pacific walruses.

The research used a video camera to film the animal's head and whisker movements as a trainer moved a fish over the animal’s whiskers from one side to the other.

It was found that all the three species positioned their whiskers toward the fish by orienting their heads. At the same time, their whiskers also moved.

In addition, some species displayed whisker control behaviors that have previously only been observed in land-based animals. For example, the walrus’ whiskers would demonstrate head-turning asymmetry (in which the whiskers move ahead of a head rotation to scan the area that the head turns into. Another example involved the walrus and sea lion engaging in contact-induced asymmetry (where the whiskers are positioned asymmetrically toward an object).

The researchers also noticed some major differences in whisker positioning and orientation amongst the three species. Walruses, which had densely packed whiskers that are more forward-facing, did not move them around as much as the other two species. When foraging in murky waters, they would move their heads around; their whiskers would scan the seabed for prey, much like a brush.

On the other hand, seals and sea lions had fewer whiskers that were spread out on the sides of their faces. “Both the sea lion and the harbor seal move their whiskers in a similar way and we think it’s related to the way they orient toward fish while hunting,” said Grant.

For the next phase in the research, she intends to focus on active touch sensing. “Now that we’ve learned that sea lions move their whiskers the most and are able to orient the most to contact, we want to see if they are capable of task-specific whisker movement—using their whiskers much like we move our fingertips.”

“For example, if you train them on an object softness task or a texture or size task, would they make different whisker movements depending on the task? We, as humans, would make lateral fingertip movements to discriminate textures, squishy movements on a softness task, and feel around the edge of an object to judge shape or size.” 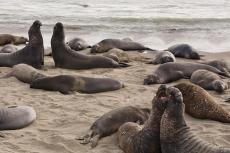 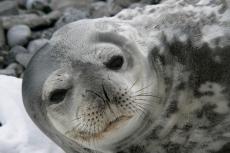 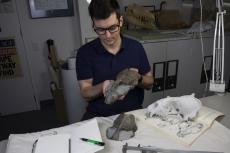