A move to the remote northern Scottish province of Orkney sparked a love of the sea, fishing and diving for the increasingly known metals artist, Sam MacDonald. Sam has exhibited his work widely and has a two year waiting list on commissions from patrons all over the world.

For more information or to contact the artist, visit his web site at: www.sam-macdonald.co.uk

Made up of 70 islands, Orkney, which also has a rich cultural and historical heritage, is a haven for diving, fishing and outdoor enthusiasts. Sam has taken inspiration from his beautiful and magical surroundings to inform his work of marine life forms and textural surfaces.

Originally from Lewis, Sam began to study and contemplate the sculptural form of fish after taking up fishing. From the glint of scales to the skeletal structure, Sam captures the textural and fleeting forms of fish in various metals of copper, lead, pewter and gold leaf. He finds the dimension of time in his work by utilizing the concept of fossilization. By studying the impressions of sea life left in split rocks millions of years old, Sam fashions prehistory and ancient memory in his sculptures with masterful manipulation and distressing of metal materials.

He often leaves out visual information of fish forms, offering only clues to the subject, thereby creating a sense of mystery to the image. He says that the mind’s eye will often fill in missing visual information in a way that gives the viewer a more full and rounded experience of the artwork.

Sam is interested not only in the beauty of the sea, but also in its more terrible aspects and its predatory side. He finds inspiration in the the exposed beauty of a skeletal structure in, for example, the remains of a fish. He sees the beauty in its “dead eyes”. Beauty and meaning can often be found in what many would call ugly.

Sam often works in lead. He says that since it is an ugly and poisonous metal, “there is a feeling of alchemy when crafting something of value from a supposedly dead material”. He also works with gold leaf to accentuate the flash of scales that can be seen in nature when a school of fish changes direction.

Ecology is a great concern to Sam as he questions what will be left of the world’s natural treasures in the future and what fossilized remains of our present time will be left for future generations to contemplate. These concerns are often expressed in his artwork where both a texture of the natural world of today and the timeless experience of the prehistoric past co-exist. ■

“There is a feeling of alchemy when crafting something of value from a supposedly dead material.” 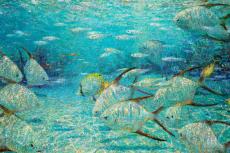 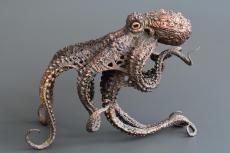 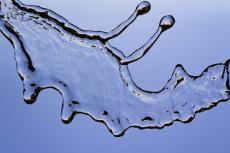