Depending on who you ask, humans are responsible for removing between 20 million and 100 million sharks per year from the oceans. Considered a delicacy in many parts of the world, shark fins are served at Chinese weddings and business dinners throughout Southeast Asia and the Pacific Rim. The problem with finning is two-fold. First, from a humanitarian aspect, sharks are still alive when their fins are sliced off; the animals are thrown back into the sea, where they’re left to drown. Second, from a practical standpoint, the demand for shark fins will soon outpace the ability of sharks to reproduce—the number of pups in any shark’s litter rarely exceeds 100—and overfishing could have serious effects for both coral reef systems and the entire food chain.

Recently, X-Ray Magazine got the chance to talk to Rob about Sharkwater and his experience filming it. Despite all the awards his film has won, he hasn’t let it go to his head. Impressively, Rob was down-to-earth, accessible, and interesting. Passionate about his subject and full of energy, Rob spoke with us at length about Sharkwater.

X-Ray: What is Sharkwater about?

Rob: Originally, I wanted to make a beautiful underwater film about humanity’s relationship with sharks. I wanted to show people that sharks are not the mindless killers that the media portrays them as. They’re actually beautiful, shy creatures who avoid humans. So, I went down to Costa Rica to film them. However, it didn’t work out that way. After about four months, I realized I wasn’t getting the underwater footage I had been hoping for, because we were busy outrunning pirate boats, being charged with attempted murder and uncovering an underground shark finning operation in Costa Rica.

In order to protect ourselves, I turned the cameras on us. Although I wasn’t getting the shark footage, all this human drama was unfolding all around me. It was a crazy experience that covered 15 countries and four and a half years. Sharkwater is not like any movie out there. It’s not really a documentary. It’s not really a film. It’s more of a “reality journey.”

X-Ray: Did you head to Costa Rica with the intent of uncovering the shark finning operations, or did you just stumble upon it?

Rob: I went to Costa Rica to film sharks off Cocos Island with Sea Shepard, which had been invited by the President of Costa Rica to help monitor sharks in the area. I wanted to work with Sea Shepard’s conservation initiative and get underwater with the sharks. But I had no idea of the extent of the corruption in the area. The Taiwan Mafia has established a huge shark finning operation there.

X-Ray: I thought Costa Rica was known for being very eco-minded.

Rob: Costa Rica is known for being very eco-minded, but in reality, Costa Rica’s sharks are just protected on paper. There’s lots of shark finning going on. It’s a multi-billion dollar operation.

X-Ray: Could anyone heading to Costa Rica see the shark finning operations? Or are they well-hidden?

X-Ray: If they have their own bay and docks, doesn’t the government have to know about it? Are they just ignoring it?

Rob: Exactly, the Costa Rican government is turning a blind eye to finning. But now the public has learned about it, and a local non-profit, PRETOMA, is suing the government for letting finning occur and for allowing the depletion of the country’s resources. After all, the natural resources of Costa Rica are owned by its citizens.

X-Ray: You’ve said that sharks are “the most misunderstood animals in the world.” What is the biggest misunderstanding about sharks?

Rob: Probably the biggest misunderstanding is that they’re primitive eating machines. That’s not the case. They’re very sophisticated animals that have survived on the earth for hundreds of millions of years. Over the course of their evolution, they’ve evolved to become sleeker.

Like electronics, they’ve become smaller and more efficient. They’re amazing animals. Another misunderstanding about sharks is that they want to eat humans. They don’t. In fact, most shark attacks aren’t attacks at all. They’re “mistakes.” However, newspapers sell more if they run stories about shark attacks splashed across their pages.

X-Ray: Other than divers and conservationists, it seems very few people are trying to protect sharks. Why do you think there are no “Save the Sharks” campaigns like there are “Save the Whales” campaigns?

First of all, sharks are a relatively new fishery. People only started fishing for sharks in the late-80s. On the other hand, whales have been fished for a while, and people have had a long time to see what effect removing them from the ocean has had. So, there’s been a long time for people to see the dangers associated with removing them from the ocean.

Since sharks are a new fishery, there hasn’t been that same build-up. Now, suddenly, we’re starting to understand how many sharks are being removed from the oceans and what effect this is going to have. Also, whales are...

Rob: Right, whales are cute and sharks aren’t, so there’s been no public support for a save-the-sharks campaign.

X-Ray: I watched the trailer of your film and was amazed by the guy who said that sharks are “the scourge of the ocean and everyone should catch one.” What would be the result if that happened?

Rob: Never in the history of humanity have we wiped out such a critical animal, the top predator in the food chain. So, we have to look at the next best thing: the sea otter, an animal that nobody thought was very important. In the 70s, the sea otter was an endangered species. Sea otters eat sea urchins, and urchins eat kelp, which is a prime habitat for the Pacific herring.

So, when we nearly wiped out sea otters, there was nothing there to eat sea urchins. The urchins ate the kelp, kelp populations dropped dramatically and the Pacific herring lost its habitat and nearly vanished. This animal that no one thought was very important in the big picture actually created a huge imbalance. So imagine the problems associated with removing the ocean’s top predator.

X-Ray: It seems divers are aware of how beautiful and important sharks are to the world’s ecosystems. But what about non-divers? How do we convey this important message to people who think sharks are the “scourge of the ocean”?

Rob: That’s why I made this movie. I wanted to show non-divers how beautiful and important sharks are. As long as people fear sharks, they won’t want to learn about them. I wanted to show them not to be afraid of sharks.

This movie has the potential to do so much good—because if sharks survive, people survive. And the response from non-divers has been amazing! We’ve received thousands of emails from people who have seen the movie and said that, after seeing it, they wanted to go see sharks and swim with them. And so far, only about 10,000 people have actually seen the film, so we’re hoping the response is going to be similar after it opens.

X-Ray: It opens this month in Canada, right?

X-Ray: When does it open in the US?

Rob: In the fall.

X-Ray: I can’t wait. What was the most surprising thing you learned while shooting the film?

Rob: The most surprising thing I learned while shooting the film... is how hard it is to shoot a film. It’s totally different from shooting photos, because the post-production work is so difficult. We’ve got over 400 hours of footage in every kind of format, from high-def to 16mm.

Putting it all together is so difficult. If you were just directing the film, I guess it would be easier, but when you’re crafting the story on so many levels—when you’re writing, directing, producing and editing the film—you have a lot to think about.

X-Ray: Yes, but that’ll serve you well on your next film. You won’t have to start from scratch.

Rob: Right. That’s good. Something else that surprised me was how much money is being put into the shark finning industry. I had no idea. When you see that the corruption extends along multiple governments, you realize that there’s a lot of money at stake. Another thing that surprised me is how difficult it’s going to be to work against finning. It’s going to be very hard.

X-Ray: Speaking of your next film, can you tell us about what you’re going to be working on next?

Rob: I have several other documentary projects I’m working on. All of them are eco-minded and try to teach that “conservation is cool.” I think that conservation should be taught in schools before Shakespeare or geometry.

The future of our planet depends on it. Anyway, one of my projects is a feature documentary that deals with ocean issues. Another one is the story of human evolution told through Africa. It’s amazing to me that Africa is the place humans learned to stand upright and, yet, with all the civil war, it almost seems there’s a de-evolution going on. Finally, I’m also working on a reality television show. Like any reality show, it’ll involve lots of young, beautiful people, drinking, sleeping with each other and stabbing each other in the back.

But these people will all be on a ship sailing through the South Pacific, and they’ll stop off at various islands and pick up local biologists and give them the tools they need to carry out effective conservation issues on their home islands.

X-Ray: Are the young, beautiful people on the boat biologists, too?

X-Ray: So, you need to find people who are young, beautiful AND smart?

Rob: Yeah, it’ll be kind of hard to cast, but I think we can do it.

X-Ray: Good luck with that. What do you want to leave X-Ray’s readers with?

Rob: I want to remind people of the issues at stake here. Our survival is in jeopardy. We need six Earths to provide us with the resources that we use every day. The earth can not sustain us. Moreover, as we use more resources, the number of large predators on our planet goes down, and that will have terrible results down the road.

We need to keep in mind that conservation is critical to the success of our planet. The ocean is not a toxic waste dump. Trees are not for decoration. We need to make decisions now that will affect our future. ■

No artificial lights for Nemo, please! 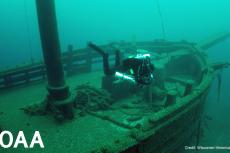