Legends Beneath the Waves – Scandinavia

That the waters of Scandinavia are simply cold and dark is a point of view you often come across, even among some divers from the region. However, Scandinavian waters offer an enormous wealth of shipwrecks that can compare with the most famous sites. This includes Viking ships, well-preserved medieval wrecks in the brackish waters of the Baltic Sea to war wrecks from the world wars and sunken merchant vessels. In a comprehensive new work spanning two volumes, René B. Andersen and Andrew Marriott review a large number of exciting wrecks worth seeing and describe the dramatic events that led to their sinking.

We had a chat with René B. Andersen about the books. 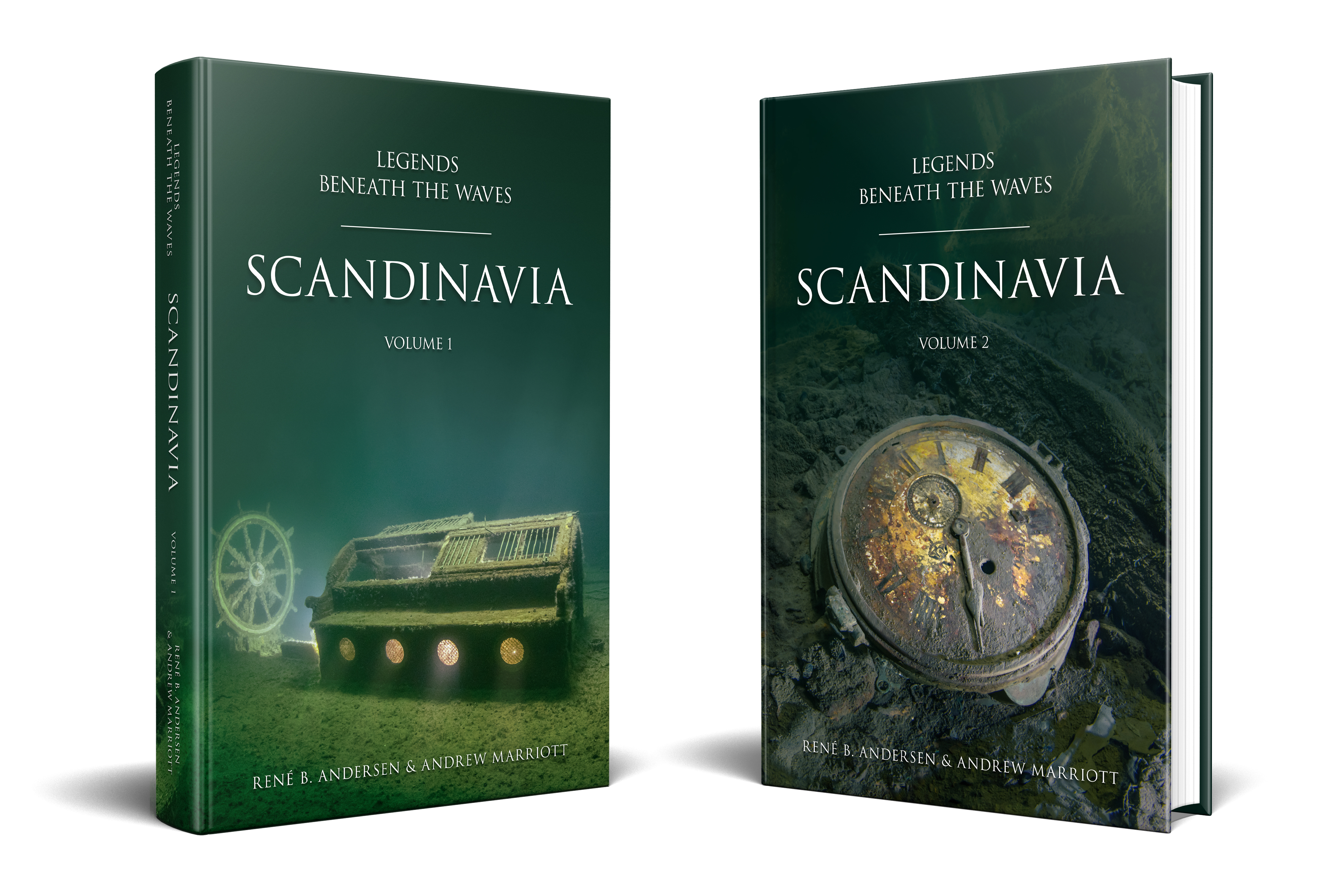 Why did you write these books?
I really like the stories of the wrecks and thought it might be a good project to combine them with my photos. A lot of books have been written about wrecks in warm waters, but many of the Nordic wrecks and the stories about them can easily compete with the southern ones. The Nordic region seems like a forgotten area when it comes to wreck diving.

When and how did you get the idea?
I had gone with an idea for a "coffee table" book, but after I won the "Underwater Photographer of the Year" competition in 2019, I was contacted by Andrew Marriott, who suggested we team up and write a wreck book. It ended up becoming two books.

How long did you spend on the book from conception to publication?
We spent three years on the project, including half a year just getting them published.

What have been the biggest "hurdles" and challenges?
The biggest challenge has been time. We began with a single book but quickly realised that we couldn't fit it all into one book. We therefore decided to make it two volumes, which took longer to create.

Then came the harder part of getting it published. In the end, it ended up being self-published, and self-financed. This is a completely unknown world for me, so there were again lots of new things I had to follow up on, and that gave me many challenges along the way.

What were the criteria for including a wreck in the book?
The best wrecks, pictures or a really cool story about the ship.

Have you visited the wrecks you wanted, or are there still some on your wish list?
There is a wreck that is still haunting, and which I think is a shame that we did not get into the book; It is the Norwegian wreck D/S Tinn which lies at a depth of 102m in Lake Tinn which is 130 km west of Oslo, Norway.

What was the most exciting wreck(s) to visit or work with?
Which wrecks are among your favourites and why?
The Oldenburg and Sao Paulo wrecks are probably the best because of their stories. Oldenburg was a privateer in WWI so this wreck has a great history; as for Sao Paulo, it is for its participation in the invasion of Norway during WW2 as well as its cargo that makes it incredibly exciting to work with.

These two wrecks probably have the longest mentions in the books. Undine was the wreck where I could collect the most artefacts from, so it was also exciting to visit the people who have a lot of artefacts lying around, and I got some good stories from them.

How many years of diving or number of dives did it take to visit all these wrecks and collect material?
The materials go back 15 years. Some of the photos are more recent, but I was only able to take those photos because I had gotten to know the wreck better after visiting it in previous years.

Is there anything you have learned or experienced over these many dives that you can share with other wreck divers?
At first, I took pictures of everything: wrecks, macro, fish and a little video. But it was only after I dropped the other things and solely focused on wrecks that I found my niche and that things succeed—and I improved my technique since my focus was only on wrecks.

Another thing that is important is knowledge of the wrecks. To get good shots, it is important to really know the wreck. For example, I was out on Bonita, which I actually think I covered well. But on another dive this year, I ditched the camera and went exploring in the engine room. There, I found a new way in and got all the way in where there were some cool motifs of the workshop and machine parts. So, even if you think you have documented the whole wreck, there may be items yet to be found.

What is your next project?
Next year's project will be Vis Island and its beautiful B17 aircraft; Åland's cool wrecks: Blücher in the Oslo fjord, and finally being able to get to the D/S Tinn.