Diving with people with disabilities has become his life passion. "To see the nervousness and uncertainty change to pure joy and euphoric smiles, when a person with a disability have conducted the first successful dive,... can move the most experienced diving instructor to tears”.

That´s how Flemming Thyge describes the emotion that has led him to dedicate much of his life to develop diving with disabilities worldwide.

Along with Fraser Bathgate, he founded the organization Disabled Divers International (DDI) and travels the world to educate instructors in diving with disabilities. Furthermore, Flemming Thyge takes people with both physical and mental disabilities diving.

It was not diving with disabilities that was on Flemming Thyge's mind when he had his first test dive in the turquoise waters of the Cypriot sea during a holiday in 1993.

The feeling of weightlessness and the silence underwater, in which all concerns left his mind at the same pace as the multi-colored fishes passed by, fascinated him. And the fascination lasted, the next year Flemming Thyge took a basic course in diving.

The basic course was the beginning on a long career in scuba diving. Alongside his studies in electronics engineering at the university, he first became a PADI Instructor and later a PADI Course Director.

He realized the dream of his own dive center in 1997. “That same year, I was introduced to diving with disabilities. I had signed up for a course primarily to broaden my horizon on teaching and to get a different approach to my dive students,” Flemming Thyge says.

From Portugal to Bali

That course becomes much more than new angles on teaching. Flemming Thyge gets so consumed with diving with disabilities that it continuously has been the red thread of his destiny.

Along the way, a defining feature has been when Flemming Thyge retrieves Fraser Bathgate—the world's first dive instructor who sits in a wheelchair—to teach on a dive course. It was the beginning on a long collaboration on diving with disabilities.

A collaboration culminating in March 2010, where they established DDI. Disabled Divers International is a non-profit organization, working with all of the international diving associations.

DDI offers diving instructors and managers a superstructure which enables them to work with people with disabilities.

"We established DDI because we felt there was a need for an independent organization, which can cooperate with all diving organizations across national borders,” Flemming Thyge states.

Flemming Thyge stresses that he and Fraser Bathgate have high ambitions with DDI. "Our ambition is to educate as many as possible whilst spreading awareness of scuba diving with disabilities.

For instance, we have experienced that diving has a great effect in rehabilitation in general and also in rehabilitating war veterans. So far, we lack concrete evidence for the impact, but we are busy collecting...“ he says and continues: "Many countries have acknowledged horseback riding as being good for people with disabilities. We would like diving approved as a disability aid,” he states.

One of the many people with disabilities Flemming Thyge has worked with is a young man he met in one of the rehabilitation centers he visited.

"I had the opportunity to take a young man, Sune, for several try dives. Sune suffers from Contusi Cerebri, which means that he has suffered a traumatic brain injury from an external source. We made diving a part of Sune's ability to move."

"Taking Sune diving has opened up a new world to him and has added to his joy of life," Flemming says and continues: "Now Sune is able to go diving when he goes on holidays abroad and so he did in 2004 to Cyprus, where he completed a try dive in open water for the very first time."

To see the joy when people with disabilities experiences the world of weightlessness and silence for the first time and to see them relieved of daily concerns might still bring a lump to Flemming Thyge's throat.

Today, it touches him just as deeply to see diving used in rehabilitation and by all means giving people with disabilities a physical boost. "It is totally indescribable,” he stresses.

Abbreviated DDI.
The organization was founded in 2010 by Fraser Bathgate and Flemming Thyge.
DDI specializes in scuba diving for people with physical or mental disabilities, both in the pools and in open water.
DDI is also specializes in training instructors for divers with disabilities.
Read more on the website: www.ddivers.org or visit the DDI Facebook. 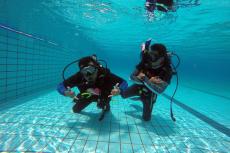 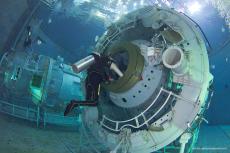 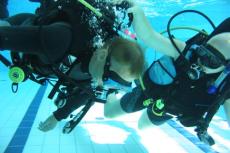