For the first time, scientists have completed an assessment of the number of corals in the Pacific Ocean and evaluated their extinction risk. Their findings have been published in a recent issue of the Nature Ecology & Evolution journal. Corals in the Pacific Ocean

“We need to know the abundance of a species to assess its risk of extinction,” said lead author Andy Dietzel from the ARC Centre of Excellence for Coral Reef Studies at James Cook University (Coral CoE at JCU).

The research team concluded that while a local loss of coral can be devastating to coral reefs, the global extinction risk of most coral species is lower than previously estimated.

Due to the broad geographic ranges and large population sizes of many coral species, extinctions may instead unfold over a much longer timeframe.

In the press release, co-author Professor Sean Connolly, from Coral CoE at JCU and the Smithsonian Tropical Research Institute said that the study’s analysis of 80 species considered by the IUCN to have an elevated extinction risk showed that 12 of those species have estimated population sizes of more than one billion colonies.

For instance, the finger-coral (Porites nigrescens) was ranked amongst the ten most abundant species in the study, and not considered to be highly susceptible to coral bleaching. Yet, the IUCN regards it as being vulnerable to global extinction.

In contrast, co-author Professor Michael Bode from Coral CoE at JCU and the Queensland University of Technology said a third of the rarest species in their analysis were listed by the IUCN to be of “least concern.”

Co-author Professor Terry Hughes from Coral CoE at JCU said the study results have implications for managing and restoring coral reefs. He said the study highlighted the opportunity to mitigate the threats to reef species to bring about an eventual recovery of reef coral assemblages.

“The challenge now is to protect wild populations of corals, because we could never replace more than a tiny percentage of them. [...] There is still time to protect them from anthropogenic heating, but only if we act quickly on reducing greenhouse gas emissions,” he added. 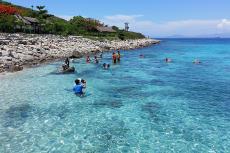