Start diving the right way! Finally, a new book for people planning on learning to dive and wanting to make sure they succeed. The gift every diver should give to friends following in their finsteps! 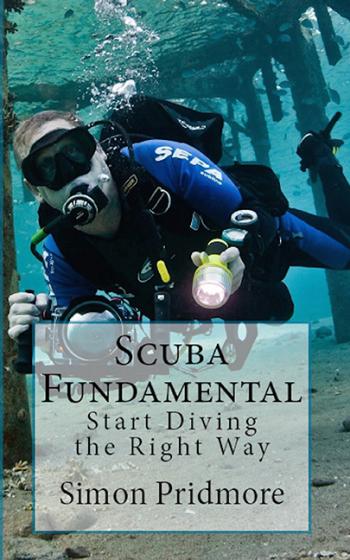 Available on Amazon in print and Kindle-ebook versions.

If you do not yet scuba dive but are thinking of learning, then Scuba Fundamental - Start Diving the Right Way is for you. It takes you from the germ of the idea that you might like to try scuba diving up to the point where you have done around 20 dives.

This is not your standard how-to scuba diving manual. It is very different. The purpose of Scuba Fundamental is not to teach you how to dive. A dive instructor will do that. But this book will make the learning process much easier. It will help you make the right choices and avoid the pitfalls that await new and uninformed divers coming into the sport.It will also set you well on the road to becoming a capable and competent lifelong diver.

You will learn the many ways in which diving will change your life and also acquire some extremely valuable advice on the etiquette involved in the sport. Throughout the book and especially in the chapter "It Happened to Me" you will be entertained, educated and encouraged by anecdotes from people who are now experienced divers but were once beginners too.

There is also an entire section devoted to diving safety, much of which covers vitally important aspects of scuba diving that standard training manuals don't emphasize enough or even leave out completely.

The book's message is: start scuba diving the right way and you will be relaxed and ready for the adventure. You will have more fun, make fewer mistakes and be confident in the fact that you are well informed, have made the best choices and have spent your money wisely.

Scuba Fundamental is a unique, reliable and essential guide: one that you can trust completely and follow during this formative phase of your scuba diving life.

What people are saying:

"I wish I had had this book to read when I learned to dive. I remember being totally confused."
— Robin Yao, Executive Editor, EZDIVE magazine

"This is the book divers should give to friends when they say they want to learn to scuba dive."
— Ian Thomas, Scuba Instructor Trainer

Simon Pridmore is the best-selling author of Scuba Confidential - An Insider's Guide to Becoming a Better Diver (2013), which is now available also in Italian, Spanish, German and French, with a Chinese version due out soon. He is the author too of Scuba Professional - Insights into Sport Diver Training & Operations (2015), which takes the same philosophy as Scuba Confidential and applies it to situations experienced by expert divers and instructors. And he has recently published a book for divers-to-be entitled Scuba Fundamental - Start Diving the Right Way (2016). Simon has also co-authored, with Tim Rock, the Diving & Snorkeling Guide to Bali and the Diving Guide to Raja Ampat and Northeast Indonesia.

He was born in England and brought up around the world. After spells as a teacher in Algeria and Oman, he joined the Royal Hong Kong Police in 1982 and transferred to the Hong Kong Civil service in 1992. He retired as an Assistant Political Adviser in 1997, shortly before the handover of Hong Kong to the People's Republic of China.

Simon learned to dive in Oman in 1981. He trained with the Sultan's Armed Forces BSAC Dive Club and was drafted by the club to help teach classes almost immediately after graduation as a Class 3 diver because he was a "schoolie." Later he joined PADI as an Instructor then trained with Rob Cason at Fun Dive in Sydney, Australia to become one of the first IANTD Technical Instructor Trainers in Asia.

In Thailand in 1995 Simon helped Rob run the first NITROX instructor trainer course in Asia and, later the same year, he and Paul Neilsen of Mandarin Divers in Hong Kong taught one of the first Advanced NITROX Instructor Courses in the region. The course was conducted simultaneously at La Laguna Beach Resort and Captain Greggs in Puerto Galera in the Philippines and among the students was future world depth record holder John Bennett.

In 1996 Simon participated in the first sport rebreather training course in Asia, using ex-Australian Navy Dräger FGTs and completed cave diver and TRIMIX Diver training with Tom Mount in Florida, USA. Then in 1997, he established the first dedicated technical diver training centre in Southeast Asia at Professional Sports Divers in Guam, Micronesia and assisted Tom Mount in Thailand with the first TRIMIX Instructor Course in the region.

The same year, Simon dived with Capt. Billy Deans when he was contracted to carry out deep-water surveys using TRIMIX of the suspected wreck site of the sunken Spanish galleon Nuestra Senora del Pilar off the southern tip of Guam. In 2001, he was one of Kevin Gurr's Pilar Project team, which conducted what was, at the time, the most extensive dive operation ever attempted by sport divers exclusively on closed circuit rebreathers.

Between 1997 and 2003 Simon was licensee of the Micronesia franchise of IANTD, which included facilities in Palau, Truk, Kosrae, Majuro and Bikini. Then from 2003 to 2008 he owned and ran the IANTD franchise in the United Kingdom. While in the UK he also worked as Head of Sales, Marketing & Technical Support for Delta P Technology and Closed Circuit Research Ltd: manufacturers of the Ouroboros and Sentinel Closed Circuit Rebreathers and the VR range of dive computers.

Over the years, Simon has written hundreds of articles and features on diver training and dive travel for magazines including Diver (UK), Sport Diver (USA), Asian Diver, Action Asia, EZDive, X Ray, Dive Log, Asian Geographic and Cathay Pacific Discovery. He has also spoken at dive conferences all over the world.

Closure of Guadalupe Island for divers cause of great concern for the sharks
30 Jan, 2023 - 21:33
END_OF_DOCUMENT_TOKEN_TO_BE_REPLACED
Advertisement