Even before the clownfish achieved Hollywood stardom as cartoon character Nemo, most of us, divers and non-divers alike, knew about this little colorful fish nesting in a stinging sea anemone. As popular photographic subjects the symbiotic relationship between the fish and their invertebrate hosts have become one of the most well known images from the world beneath the surface. What is less known, however, is how the fish avoid being stung.

Sea anemones, which contrary to their name are not plants but animals related to corals, live throughout the world’s oceans. However, out of nearly 1000 species of sea anemones, only 10 are host to anemonefishes. These are found in the parts of the Indian and Pacific Oceans that lie within the tropics, or where warm tropical waters are carried by currents.

Consequently, we find the associated clownfish in the same places. The anemones that are host to clownfishes must live in sunny places. They exist only in shallow water because within the cells of an anemone’s tentacles and oral disc live microscopic algae, which, like all plants, require sunlight for photosynthesis. In this process, sugars are produced from carbon dioxide and water. Some of these sugars fuel the algae’s own metabolism, but most of them “leak” to the anemone, providing energy to it. This is, by the way, another example of symbiosis.

There are 28 species of clownfish and they all exhibit unique patterns of association with host sea anemones in nature. It ranges from the extreme specialist, the spine-cheek anemonefish (Premnas biaculeatus), which lives with one host species only, to the generalist Clark’s anemonefish, (Amphiprion clarkii), which occurs with all ten hosts.

Sea anemones are related to corals, jellyfish and hydra. Together they make up the phylum cnidaria. A common trait for the cnidaria are nematocysts, the harpoon-like stinging capsules that give jellyfish their sting, fire coral their burn, and the tentacles of some sea anemones their stickiness. Within each capsule is coiled a fine threadlike tubule many times the capsule’s length.

When the capsule is stimulated to fire, the tube shoots out — inverting like the sleeve of a coat turned inside out — to penetrate or wrap around the target. Nematocysts function in prey capture and many can inject toxins, which are delivered to predator and prey by or through the everting tubule. The threads are frequently armed with spines that aid in puncturing a hole in the prey.

Over the years, many biologists have wondered how it is possible for the clownfish to adapt to such a hostile embrace. It has been suggested that the tentacles of the particular anemones do not contain nematocysts but all 10 host species are quite typical in this regard. It has been mentioned that the fish may not actually touch the tentacles. But while this is true for some Caribbean fish that seek protection behind and undersea anemones, as most divers will know clownfish do swim among tentacles, and in fact sleep on the oral disc at night.

Another suggestion was that the skin of anemonefishes is thicker than normal so nematocysts cannot penetrate it, but this is not the case, the skin of clownfish differs little in thickness from that of other fishes, and may even be slightly thinner than that of the damselfish. Also, as mentioned below an unprotected anemonefish can indeed be killed by its host’s sting. Finally, it has been suggested that while a fish is present, the anemone will not fire its nematocysts. But although a sea anemone seems to be able to have some control over its firing, it still stings and captures prey while harbouring clownfish.

The biochemical details remain ambiguous. What we do know is that some anemonefish species have evolved resistance to toxins secreted by host anemones, but the essential protection from the nematocysts stems from the anemonefish skin mucus.

Anemone fishes are innately protected from some anemone species but must acclimatise to live with others. Most anemonefishes are stung by unnatural hosts, i.e. hosts they do not live within nature. However, the protection mechanism remains largely unclear. Several hypotheses exist, though they are not mutually exclusive.

What seems to be the matter, is that clownfish somehow acquire or elicit protection and that this protection can also disappear again. In experiments in aquaria where the clownfish has been separated from its host anemone for more than a few days or weeks when the partners are then reunited and the fish swims into the host’s tentacles, it withdraws rapidly, appearing to have been stung.

Depending on the species involved, this reaction is sometimes very obvious. However, a stung anemonefish will return to its host and carefully and gradually expose itself to the tentacles of the anemone through elaborate stereotyped motions, first touching the anemone with its ventral fins only, then exposing its entire belly. This process may take a few minutes or several hours but in the end the clownfish is able to dive right in.

So, is it the fish or the anemone that is responsible for the protection? A clownfish which has been living alone will be stung by an anemone already harbouring another clownfish. It seems that the protective agent resides in the mucus coating that anemonefishes, like all fishes, have on their surface. But what is the source of this protective mucus? It has been speculated that when contact between the clownfish and anemone is initially made, the fish smears mucus from the anemone all over itself.

And just as the sea anemone does not sting itself, the fish is thereby chemically camouflaged: it is, essentially, a fish in anemone’s clothing. The fish’s normal behaviour of returning to its anemone at least once a minute can be interpreted as serving to maintain its protective layer of mucus. According to this theory, what allows clownfishes to live in this particular habitat is their unusual behaviour.

However, not all biologists subscribe to this hypothesis. There are other scientists who believe that the presence of protective mucus is the result of the fish being protected and not cause. According to their beliefs, the fish’s own mucus has evolved to lack components that stimulate nematocyst discharge, and the observed “acclimatization” behaviour just an artefact of artificially separating animals that normally never are parted. The secret to clownfishes’ peculiar habitat, according to this interpretation, is their unusual biochemistry.

A fish kept in an aquarium with a surrogate sea anemone made of rubber bands glued to a Petri dish required an average of only 20 minutes to acclimate to a real anemone, whereas the acclimatization time being directly exposed to a real host anemone was two and a half hours.

It appears that the mere perception of what seems to be a host anemone elicit the fish to produce an especially protective mucus, but since it must still undergo a period of acclimatization, that alone does not suffice. It seems necessary that the anemone alters or adds to the mucus somehow. ■ 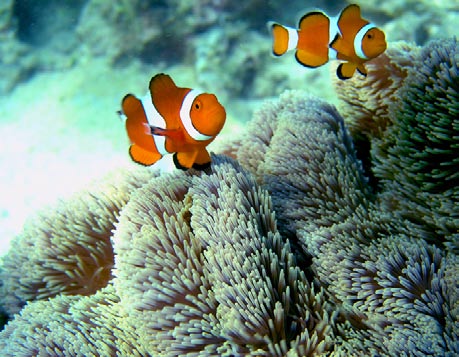 Clownfish find their hosts by remembering their smell, which drifts over them as embryos.

Sea anemones have long been known to release very powerful olfactory compounds, which might best be described as perfumes. It seems that Clownfish become ‘addicted’ to the perfume as an embryo in the egg, lying next to the sea anemone covered in perfume-like compounds it releases.

This hypothesis had to be proved underwater by locating a lot of clownfish egg-clutches nestled by host anemones. Over several weeks of successful dive-investigations, we observed about 40 pairs of clownfish with egg-clutches and, without exception, they had all placed their clutch right next to their host anemone’s column, not even a millimetre away.

By good memory, and a keen sense of smell, juvenile clownfish can quickly track down a suitable sea anemone by smelling their way to the perfume, when they settle on the reef two weeks later. Earlier American and Japanese research on the fate of reef fish larvae established that clownfish larvae emerge from the egg case after seven to nine days, and immediately swim to the surface. They swim around in the ocean, sometimes drifting with the currents, vulnerable to the environment, and feeding on plankton.

After two weeks, the juvenile clownfishes are about a centimetre long and ready to settle on the reef. This always happens in the middle of the night, when there is less chance of being discovered by a hungry predator. Once the fish reach a coral reef, the search is on for a suitable host sea anemone to take them under its protective tentacles. Not all of them will be fortunate enough to find one, and the unlucky ones will end up on the menu of many larger fish or invertebrates on the reef. But for the lucky surviving ones, the smell they instinctively remember is their passport to safety.