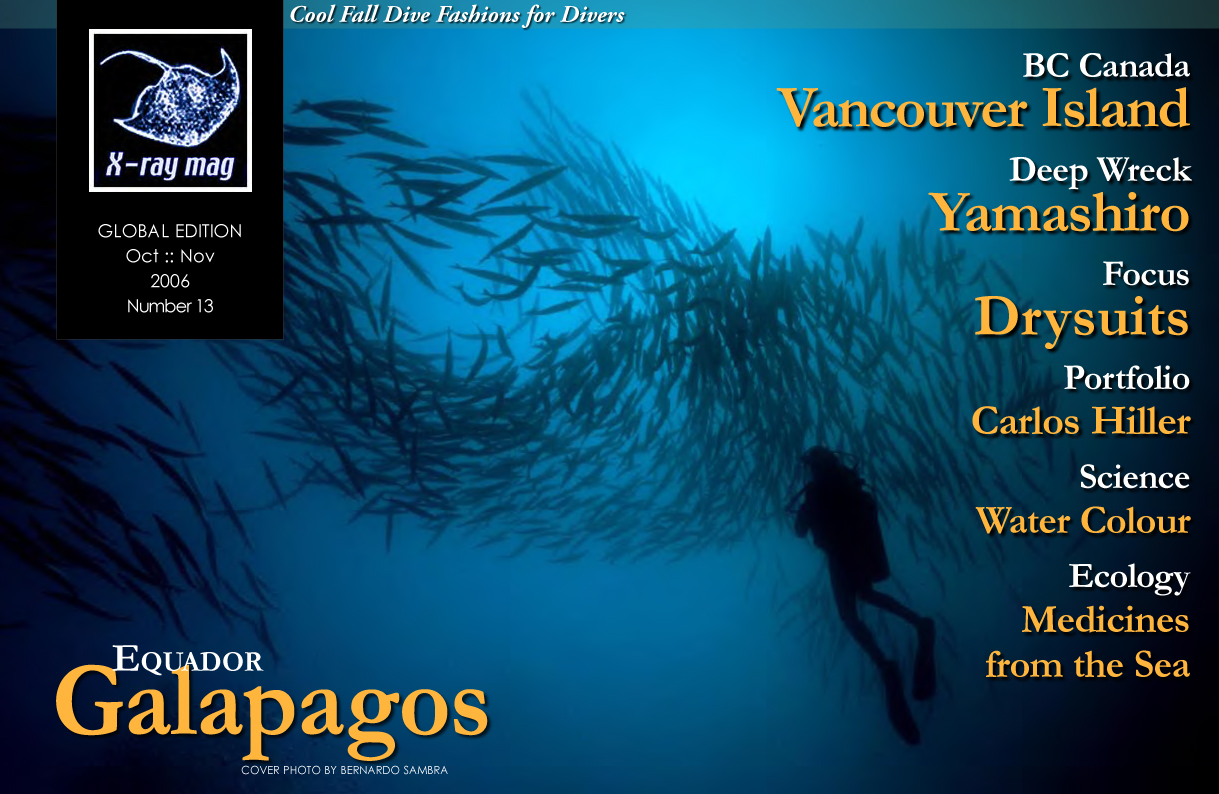 The art of Carlos Hiller is devoted to the ocean. His paintings bring powerful images brimming with energy and marine life into our daily lives. Huge schools of fish and diverse marine creatures are usually present on his paintings which evoke the mysterious atmosphere of the underwater world. Some works are split images, giving us views above and below the surface of the water at the same time in one painting.

My dive buddy and I enter the cool clear water and descend down a mooring line to the deck of the 110-meter (366-ft) wreck Saskatchewan. The water is 8°C (47°F). I look up to see the rest of the group silhouetted in a light emerald hue arrive like slow motion skydivers.

All the questions about drysuits you always wanted to know the answer to but never dared to ask: Why dive drysuits? Neoprene or membrane type? Purchasing a suit. Zippers and care. Getting the Bouyancy right. Diving the suits. Special training and tips.

Galapagos: Diving in a Darwinian World

“Sui Generis” is the most appropriate way I find to describe the Galapagos Islands. A place where the intruder is the human being. A place where many of its inhabitants are animals that exist only in this small piece of the world. A place where evolution seems to have been suspended at some moment in time. A place where we can feel like pioneers in each corner.

Nowadays, the name Yamashiro could have different meanings depending on where you come from. If you live in Los Angeles, a huge pagoda near Hollywood is the oldest structure in California and hosts a famous restaurant named Yamashiro or “Mountain palace” in Japanese. If you live in Kyoto, Japan, Yamashiro is the name of an area close-by.

And for the older generation, it’s also the name of a never forgotten Japanese battleship lost during WWII during one of the major battles of naval history, the battle of Leyte, October 1944. Finally, if you’re a scuba diver, you might have heard about the wreck of the HIJMS Yamashiro as definitely the most challenging shipwreck in the world, because of the remoteness of the location, the extreme depth and the very bad diving conditions.

For millennia, mankind has been obtaining nourishment from the oceans, not only from fish and shellfish but also from the various types of plant life. The oceans are also home to some of the most pois