Aquatic animals, like their land-based relatives, can communicate in a number of ways. For example, in one form of communication, organisms can emit and detect certain organic molecules which can function as the pheromones of land based creatures. This is a sexual communication.

In the past, the tree of life was constructed on the basis of similarity of morphological features. The more similar two species looked, the more closely they were thought to be. But looks can be deceptive.

This became abundantly clear more than a decade ago, when molecular biologists began comparing small numbers of genes from various organisms and found that many species were not what they appeared.

Hippos, for example, were once thought to be the kissing cousins of pigs, but genetic evidence revealed their closest relatives to be the cetaceans (whales, dolphins and porpoises).

Sound transmission in the Ocean

Sound, as most people will know, consists of varying longitudinal pressure waves transmitted by a medium. Sound can be described by four parameters:

1 Hz is one cycle per second.

Loudness, a subjective perception, is a function of the wave intensity, which itself is a function of (amplitude)2, (frequency)2 and speed, and the sensitivity of the hearer to the given frequency.

The speed of sound depends on the medium through which the waves propagate. For example, the speed of sound in air at 18ºC is about 331 ms-1, and about 1524 ms-1 in sea water at the same temperature i.e. about five times faster.

Due to the wave energy being converted into random energy in the molecules of an imperfectly elastic medium, the sound becomes attenuated. Attenuation is much less for water than air making water an efficient transmitter of sound. This makes it very useful as a tool for marine creatures.

Humans can detect frequencies between about 20 Hz and 20000 Hz, with the maximum sensitivity being at about 1000 Hz, which is about two octaves above middle C on the piano. A frequency of 1000 Hz corresponds to a wavelength of about 33 cm in air and 1.5 metres in water.

As pressure and temperature change with depth in the oceans so does the speed of sound. A temperature gradient exists when the temperature of the water decreases with increasing depth, called a thermocline.

However, at a depth of about 750 metres the water temperature becomes essentially constant so that the speed of sound becomes more a function of changes in pressure due to depth. This can give rise to special effects when specific combinations of temperature, pressure and salinity occur. Among these are the formation of the SOFAR channel. 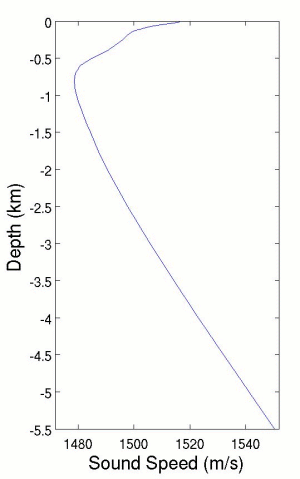 Therefore, at the interface of the thermocline and the depth at which the temperature becomes constant, a region exists at which the speed of sound is a minimum.

From the equation c = νλ it can be seen that for a constant wavelength λ the frequency ν is proportional to the speed c.

Therefore, at lower speeds the frequency is lower. A channel is thus created within the oceans, which permits the transmission of low-frequency sound over thousands of kilometres.

This channel allows long distance sound fixing and ranging (SOFAR) and was discovered in 1943 by both the Americans and the Russians.

Being a function of the depth and of the extent of the thermocline the SOFAR channels are closer to the surface in the colder northern waters. Due to the shape of the SOFAR channels sound waves can become trapped in them and, as they are travelling at minimum velocity, lose little energy as they progress.

This permits them to travel distances of up to 25,000 kilometres. It is claimed that some whales utilise the SOFAR channels for mating calls over great distances (see figure).

As stated above, sound has been employed as a very useful tool by many aquatic creatures. However, it is the marine mammals that have made the greatest and most sophisticated use of sound as a means of communication.

There are three orders of mammals that have evolved independently and adapted to life in the sea.

All of these mammals produce sound signals, with the seals and sea lions producing great growls and roars. However, it is perhaps the cetacea that are of the greatest interest when discussing sound and communication beneath the waves as they can produce echolocation clicks, beeps and even songs.

There are over 80 species of cetacea which can be divided into two subgroups, those of the suborder mysticeti (the Baleen whales), a group of 12 species containing the great Blue whale, the Right whale and the Humpback whale; and the suborder odonticeta (the toothed whales), a group of about 70 species containing the Bottle-nosed dolphin, the Sperm whale and the Killer whale.

All of these aquatic mammals produce sound. For example, the Blue whales produce very low frequency sound in bursts of 10 to 15 seconds of about 40 Hz i.e. they are bass singers. On the other hand, the Beluga whale is known as the sea canary, having a much greater singing range from 1.5 kHz to 60 kHz. It could perhaps be considered the soprano of the aquatic world except for the fact that it is only the males who sing.

Other aquatic mammals have different frequency ranges and melodies. For example, the Bottlenose dolphin uses a large range of frequencies between 7 and 15 kHz to emit clicks and whistles. And among the pinnipeds, the vocalisations of the Weddell seal have a frequency range from 100 Hz to more than 70 kHz, emitting a large number of warbles, trills and chirpings.

It is the male Humpback whale, though, that is the most prolific singer of them all.

The male humpback whales sing the longest, loudest and most complex songs, with repeating themes, and they can last for more than half an hour. They are the most musical of the whales with a frequency range of from 20 Hz to 8000 Hz. These songs can be heard thousands of kilometres away, especially if a SOFAR channel is used.

The songs can be very different, depending on location, although they are only heard on the breeding grounds. For example, the whales of the North Pacific sing quite differently from those of the North Atlantic. And even within a given area, there can be dialect differences. The songs also change over time and are therefore different from year to year.

The production and perception of sound by Baleen whales

This is still an ongoing area of research. With regard to the location of the source of the sounds, it is known that the nasal plug and nasal sac system move when sound is produced. Baleen whales do have a larynx but it lacks vocal chords, and furthermore, unlike humans, whales do not have to exhale to produce sound.

However, the mechanisms of sound production are still unclear. Like terrestrial mammals, whales have an outer ear, but this tiny opening closes underwater.

However, there is a very sensitive reception of vibrations through the bones of the head. The perception of these vibrations is via the bone structure of the middle and inner ears. This structure is a modification of that of the terrestrial mammals, which of course the whales once were millions of years ago.

It is interesting to note that even aquatic mammals display the same right handedness as humans, of whom some 90 percent are right handed.

To quote from a recent book, Right Hand, Left Hand, by Chris McManus, on the origins of asymmetry in brains, bodies, atoms and culture:

“Humpback whales like to slap one of their two flippers on the surface of the sea, and for three-quarters of them it is the right one that they choose.”

Not only do these whales use their “voices” to make sounds, they can also signal by slapping their flukes and flippers on the surface of the water. It seems that this is also a form of communication between Humpback whales.

Otherwise, if you would like to hear some of the whale songs for yourself then Songs of the Humpback Whale is recommended. This is an audio CD available at Amazon.co.uk, costing GB£9.98. This has had excellent reviews. Direct link 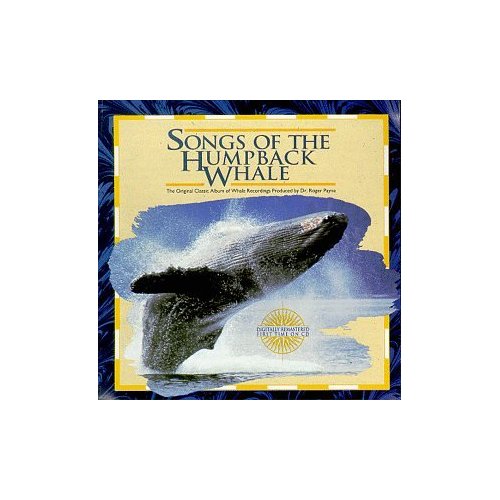 What is this signalling used for?

It is reasonable to ask what is the use of this communication, if it is such. Seen from the point of view of evolution, it must obviously be an advantage.

As mentioned above, the songs are heard only on the breeding grounds, generally during breeding times, and it therefore seems to be safe to conclude that they are connected with breeding behaviour. The songs are apparently used to court females and to frighten off male rivals. As the oceans are so big, perhaps the songs are used to attract suitable females from afar; or perhaps, like the songs of birds in the Spring, they are to stake out a territory.

Interestingly, it has been observed that there is a clear resemblance between whale songs and, for example, some of the sounds produced by elephants. Obviously, we are still in great ignorance about the “languages” of animals and how they communicate.

When sound from a whale is reflected back from a solid object, an echo is created, which can be perceived by the whale. The sound is emitted as a series of clicks, and the whale listens for the reflected echoes. The time it takes for the echoes to return tells the whale how far away the object is. Whales are able to resolve the sound down to 0.1 m/s which, at a speed of sound of 1500 m/s, corresponds to a distance of 15 cm. It is a useful tool for when visibility is reduced in turbid waters.

Some whales, the odontocetes, hunt prey using echolocation, with some species showing the ability to herd and capture their prey.

Effects of human actions on the underwater  environment

It has been established that large noises in the oceans can seriously effect the health of the aquatic mammals. Just as very loud noises can affect humans and can cause not only pain but also disorientation, so also can the aquatic mammals be affected. Ship and submarine noises together with marine seismic surveys seem to be affecting the populations of the different whale species.

Has the Humpback whale a future?

Prior to their commercial exploitation, the population of the Humpback whale is estimated to have been about 115,000. Today, there appear to be no more than about 10,000 remaining, and they are now considered as an endangered species.

It is horrifying to think that these fantastic creatures, due to their being hunted by egoistic humans, are rapidly moving towards extinction and the silencing of their songs. ■