The EUF (European Underwater Federation) has announced that Professor Dr Franz Brümmer is to receive the Lavanchy Award in Dusseldorf today—Saturday 18 January 2020.

Professor Doctor Franz Brümmer (right), former President of the Association of German Sports Divers (VDST) was honoured on 7 December 2019, when he received the DOSB Badge of Honor from DOSB President Alfons Hörmann (left)

The EUF Lavanchy Award is presented annually to an individual whom EUF members feel "has made a significant and sustained contribution towards the responsible development of the European diving community."

This year, Franz Brümmer, a 63-year-old diver and German scientist, who has always been keen to introduce marine biology to a broad audience (with the aim of encouraging wide and active environmental protection) will receive the Lavanchy Award.

Franz Brümmer grew up almost as far away from the sea as you can get in Germany, in Schöntal-Bieringen. (Apparently, a significant number of entrepreneurs hail from this agricultural region.)

Brümmer was curious and fascinated about the peculiarities of individual living things—their development and biophysical processes—therefore in 1977, he began studying marine biology at the University of Stuttgart.

Brümmer had been inspired by Hans Hass, and was fortunate to follow in the finsteps of his role model, and dive the Red Sea at the beginning of his career. In 1981, he participated in an early marine biology Red Sea expedition, where he dived and identified species of sea urchins. It was quite probable at the time that he would not have conceived diving the same waters several years later as a lecturer, this time teaching his own students.

Future overseas research trips beckoned. In 1983 Brümmer's PhD supervisor, Professor Dieter Hülser, took a biophysics team that included Brümmer, to Florida to research sharks. Later, after Brümmer had completed his studies, he conducted research in both the USA and Russia, before returning to Stuttgart to complete his PhD in biophysics and shock waves. He later used this knowledge when he helped set up an electrophysiology test station for sea urchin fertilisation, at the marine biological station on the French Atlantic island, Ile d'Yeu.

Echinoderms were not the only species to turn Brümmer's head. Since 1995, he has led the working group "Aquatic Invertebrates" at the University of Stuttgart, studying a variety of life in their natural habitat. In more recent years, he has been involved with natural product research, and in particular worked with sponges. Brümmer was instrumental in encouraging colleagues from varies disciplines and universities to collaborate and focus their investigations on Porifera at the German Centre of Excellence 'BIOTECmarin'. (This long-term project has found new ways to protect and develop sustainable use of raw sponge material after running precise breeding experiments in the laboratory and the sea.)

Brümmer has contributed to a number of papers. Here is a selection of his work, you can find more papers on PubMed.

His distinguished and on-going career in the fields of education, academics, research, sport and the environment stand out as beyond exceptional as does the thread that winds itself through his amazing narrative and that is his love of the ocean

When Professor Dr Ralph O Schill presented Brümmer with the Hans Hass Fifty Fathoms Award in 2019, he spoke about the German's scientific commitment, curiosity and open door policy. [Translated from German] "Franz has an open door approach and takes time to talk and listen to the cleaner, the students or a member of the Faculty—he has not locked himself away in a scientific ivory tower like some of his peers. Franz not only looks forward, he also looks back through libraries, reading reports that can be up to 100 years old, that have yet to make it into the digital format. Hence this work has been overlooked by others. One of the exciting things to come out of this is that many of today's experiments using state-of-the-art methods, lead to a similar result."

The President of RSTC Europe (Recreational Scuba Training Council) - Oliver Mielke - nominated Franz Brümmer for the award for his sustained contribution to the scuba diving industry.

Mielke stated, "Almost 20 years ago, Franz joined the board of the major German diving association VDST (Verband Deutscher Sporttaucher) and CMAS as a dedicated marine biologist. Together we worked on the preservation project 'Naprotect' to help keep the Napolean Wrasse safe in the Red Sea."

Brümmer has sat on a number of committees and boards. The following are just the volunteer roles.

Mielke stated, "During his time as VDST president, Franz has always understood the interests of divers as a whole. Despite association barriers, Franz was always open to constructive dialogue between diving organisations." Franz Brümmer retired as President of VDST in November 2019, after serving 16 years in this post.

At the same time, Brümmer has remained an enthusiastic diver, actively engaged in field research. One colleague remarked that an apt expedition slogan would be "the boss is still diving with us."

Like Jack Lavanchy, Franz Brümmer has always tried to bring together the different positions and pursue the common goal: diving. The greatest activity of all! Oliver Mielke, President of RSTC (Europe)

As VDST President, Brümmer will have had regular meetings with Jack Lavanchy. Apparently, the meetings between the two at several Boot Shows were almost legendary. Franz always had a glass of Chardonnay ready for Jacky.

This article was updated on Sunday 19 January to include the top photo of Steffen Scholz (left) presenting the 2020 EUF Lavanchy Award to Professor Dr Franz Brümmer at Boot 2020.

Franz Brümmer is pictured here on the right with the Steffen Scholz (EUF President). The two divers made a toast to remember Jack Lavanchy's tradition of discussing and exchanging ideas over a decent glass of white wine. 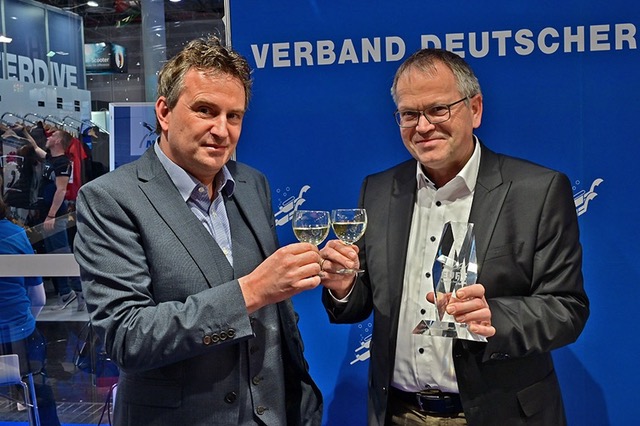 Following the presentation on the main stage at Boot 2020 Franz Brümmer gave this short speech.

After the award ceremony the German Underwater Federation (VDST) held a small celebration at its booth, where a select number of guests, including Dr Uwe Hoffmann (VDST President), congratulated Dr Franz Brümmer. Franz Brümmer graciously thanked everyone and the VDST for hosting the celebration.